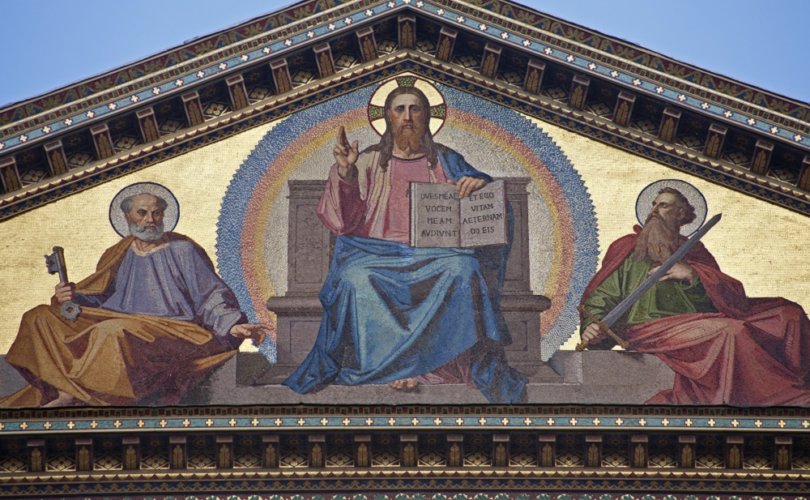 July 7, 2020 (LifeSiteNews) — Cancel culture isn’t content with getting conservatives thrown off cable television these days, though it definitely wants that. By all indications, Tucker Carlson is its latest target.

No, liberals have their eyes set on something bigger.

What leftists are currently engaging in is an attempt to overthrow, with help from the professional liars who run America’s corporate news networks, the entirety of Western Civilization.

Their first coup attempt — to invalidate the 2016 election by removing Donald Trump from office because of “Russian interference” — failed spectacularly.

Their goal now is to throw out the principles that underlie the United States…as well as the Christian faith.

The root cause of their hatred

The front-line fighters in this war for the West are a sad lot of mostly twenty-something anarchists who are themselves victims of the Sexual Revolution.

Most are lost souls raised in broken homes with divorced parents. They grew up in corrupt school systems that denied them any knowledge of the Christian faith. If they did happen to learn anything about Christianity, they were likely taught that it is a repressive, sexist religion.

From kindergarten to college, these pro-LGBT, abortion-supporting Zoomers have been coddled in a liberal bubble — indoctrinated with the belief that their “feelings” are supreme and that no one has a right to offend them. Their outbursts are cries for help as far as I can tell.

Ultimately, their assaults on private property and tearing down of statues are symptoms of persons who do not have Jesus Christ as the guiding figure in their lives.

Pope Leo XIII once taught that “[i]f the mind assents to false opinions, and the will chooses and follows after what is wrong, neither can attain its native fullness, but both must fall from their native dignity into an abyss of corruption.”

His words directly apply to the times we are living in today.

However, what we are seeing play out in the streets of America is not merely the product of one or two generations of failed social policies.

What is happening across the West is the culmination of centuries of men rejecting Jesus Christ and His church and placing themselves at the center of public life over and against God.

When men rebelled against Christendom during the 1500s, society began to decay.

Slowly distancing themselves from the true faith, men began constructing not only their households and cities on lies, but entire nations as well.

Some countries, like the United States, struck a balance between truth and error. For a long time, that seemed to work due to the goodwill of so many ordinary, God-fearing Americans.

Admirably, many well intentioned politicians have been fighting back against those seeking to destroy the West. President Trump’s speeches in Poland and at Mount Rushmore this weekend are two such instances of someone resisting their sinister plot.

But is what President Trump has said and done really enough? Is anything that members of the GOP have done in response to the madness going on in America going to actually save the United States? If we’re being honest, they don’t have a great track record of preventing its slide into hedonism.

Many so-called “nationalists” and populists are rising up across the U.S. and Europe to fight the globalist, one-world agenda.

That’s all well and good. But what is nationalism without God? What is populism without Christianity? Didn’t Christ himself say, “Without me, you can do nothing?”

The best message a politician can give right now is one that includes not only Jesus Christ, but, more specifically, the Catholic faith.

In 1873, American Catholic intellectual Orestes Brownson spoke of the desperate need for the United States to convert to Catholicism. His words are prophetic.

“Let the American people become truly Catholic … and their Republic is safe,” he wrote in an article for his Brownson Quarterly Review of that year.

“Let them refuse and seek safety for the secular order in sectarianism or secularism, and nothing can save it from destruction.”

“Most happy are those states that establish laws inspired by the doctrine of the Gospel, and do not refuse to render public homage to the majesty of Christ, the King,” he declared in 1939.

It is therefore inadequate to say — as many Republicans and conservatives today do — that America must return to “limited government” and “faith and reason.”

So long as the majority of persons in the United States remain outside the bosom of the Catholic Church and her grace-giving sacraments, then all politics really amounts to is arranging deck chairs on a sinking ship.

Restoring all things in Christ

Pre–Vatican II popes always taught that without the Catholic religion, man’s reason will inevitably falter, his understanding of the natural law will subside, and his will will weaken.

“The intellect is a guide … but if it lacks its companion light, the knowledge of divine things, it will be only an instance of the blind leading the blind,” Pope St. Pius X once wrote.

Fr. Francis J. Connell, one of the sharpest American minds in the 20th century, re-iterated that teaching when he published in 1951 the following remarks:

How, then, can civil rulers know their duties of natural law unless they have recourse to revelation, as interpreted by the one authentic teacher of revealed truth, the Catholic Church?

If a person tries to solve the moral problems connected with sterilization, euthanasia, contraception, etc., he will very easily go astray unless he relies on Christian revelation as proposed by the teaching authority of the Church.

There is no surer foundation on which to establish a country (or to fight a war against those who are doing the bidding of the devil) than the Catholic faith.

If the United States wants to truly protect itself from the coup being waged upon it by radical leftists and Marxists, it must cloak itself in the Catholic faith.

For their part, Catholics living in the United States must heed St. Pius X’s command to take up the “arduous task of the restoration of the human race in Christ.” And that includes restoring America to Christ. She now more than ever needs the help of Catholics.