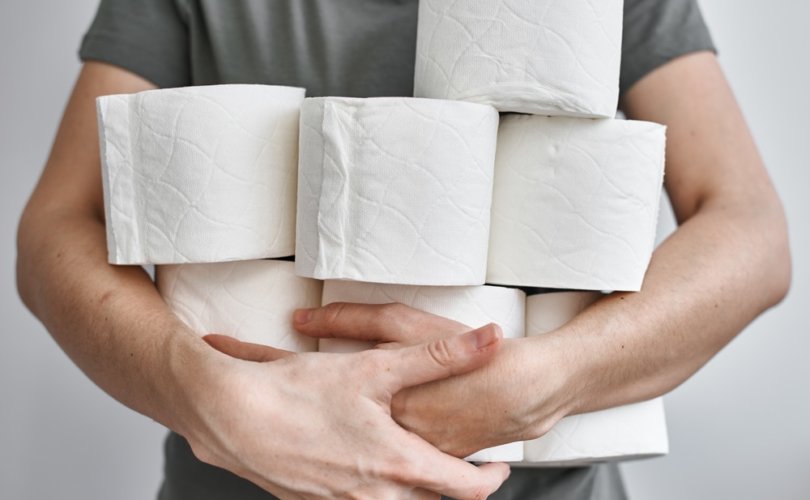 (LifeSiteNews) – Do you remember those panic-ridden days of March 2020 when hoards of citizens stormed the toilet paper aisle to acquire the one amenity they just could not live without? It wasn’t food or water, it was toilet paper that was the key to surviving COVID.

Perhaps there is a lesson in there: Since the dawn of the hysteria, our heads have been in the toilet.

Recent statements from one of Ontario’s head COVID zealots reaffirm this.

The head of the Ontario Science Table is convinced that we are in the midst of a COVID spike of epic proportions! He has evidence from where toilet water goes to prove it.

Some crazy doctor is saying that based on sewer water we actually have 100,000 ‘cases’ in Ontario.

These people are insane https://t.co/hO6bdKz3bU

Dr. Peter Juni spoke with the CBC on Wednesday and laid out his most recent theory as to why Ontario is undergoing a tsunami of disease in Ontario’s largest province … even if numbers of deaths and hospitalization are as low as ever. Oh, in addition, those who have been triple jabbed or more have an infection rate twice as high as the unjabbed; infection rate, not just numbers of cases.

At any rate, the fact that COVID continues to not be a plague is meaningless to Ontario’s best and brightest. To prove to a public that is not sufficiently frightened of what has become a common cold, Juni and his buddies have gone diving into the sewer and wastewater system to find the COVID monster.

In fairness, it is not unheard of to look into wastewater that contains sewage to find disease. For certain bacteria like E. Coli, this has been done for good reason. However, Juni is now looking to the sewers to find evidence of a respiratory illness.

He told the CBC that he estimates 100,000 to 120,000 new cases of COVID daily, according to what the sewers are telling him. He said that since the government is not doing PCR testing as much as he would like – a test that has been shown to be wildly inaccurate – the experts are now relying on wastewater to dig up the real dirt on COVID.

Crazy doctor proves COVID might be less dangerous than the flu

He said that an estimated 4.5 million to five million people have been infected with COVID since December 1.

Let’s do some basic math.

Since the pandemic was declared, there have been roughly 12,500 deaths associated with COVID in Ontario. Now, we know that many of those were falsely labeled – which in another industry would be called fraud – however, let’s take those numbers at face value for in order to make a demonstration.

The number of deaths equals about 0.25 percent of five million. Five million is the estimate that Juni gave for COVID infections since only last December. It is reasonable to assume that Juni’s toilet COVID cases would have existed before December 2021. How much lower would that number of 0.25 percent be if we were to use Juni’s sewer estimation method and apply to the preceding months and years of data?

According to the government’s official numbers, the total number of cases in Ontario since the pandemic was declared is 1,180,121, which amounts to about a quarter of Juni’s estimate of cases within the past four months.

Every year in Canada the flu hovers around a 0.1 percent fatality rate. If we follow Juni’s ramblings, we will arrive at a percentage point much lower that the rate for the flu.

Don’t panic but wear masks and don’t be normal

In fairness to Juni, he told the CBC that people shouldn’t panic. However, the Sewer water Sage said that we have so many cases – cases numbers that show COVID is hardly as deadly as he would like us to believe – because we are “just moving too much toward normality.”

“We just need a little bit longer right now,” he said. “[W]e shouldn’t panic, but we should mask up.”

So the numbers he gives us make COVID look like a paper tiger compared with the flu, but of course we should not act too normal and should also wear masks … because there is nothing to worry about.

I can’t imagine being inside the mind of a COVID zealot; what a fractured logical framework.

Perhaps this is a poetic end to the comedic tragedy that has been the manufactured COVID crisis – it started with toilet paper and is ending with sewer water.