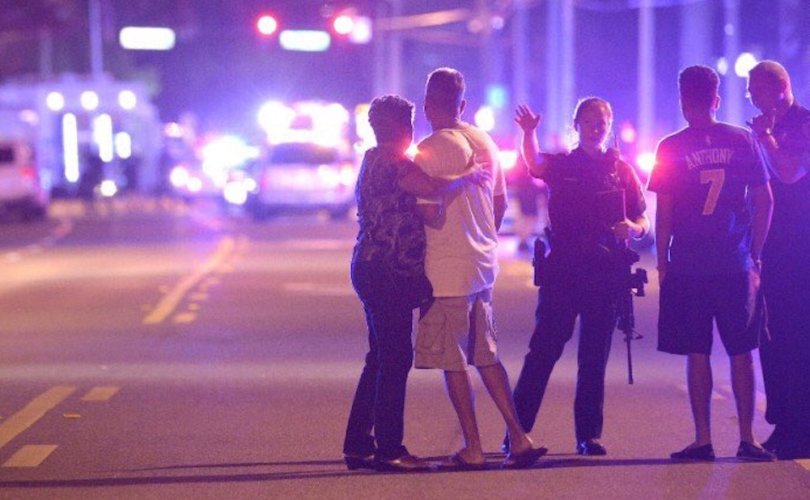 A parishioner told me that a mass shooting had taken place at an Orlando, Florida, nightclub earlier that morning. She was nearly in tears, asking to pray for its victims.

She didn't tell me they were homosexuals, but it wouldn't have changed our response. She and others were pained by dozens of vicious murders and sought the deep solace only a heartfelt appeal to the Divine could provide. Their reaction, our reaction, is the way most people, and especially most Christians, treated the mass murder.

The hearts of all Americans of goodwill broke upon learning that, in the wee hours of Sunday morning, an Islamic jihadist burst into a gay nightclub and opened fire during a three-hour-long siege that left 50 people dead and 53 injured.

Omar Mateen, a 29-year-old divorced Muslim man with a three-year-old son, had been investigated by the FBI for ties to Islamic radical terrorist groups in 2013 and 2014. However, agents determined that he was only loosely affiliated with any terrorist group, and they closed the case.

Mateen formally swore his allegiance to the Islamic State in a phone call to 911 just before he opened fire, according to local police.

Around 2 a.m. he entered the Pulse night club, a gay bar, for a three-hour killing spree that only ended as Mateen – who had by now taken hostages – lost a shoot-out with Orlando police.

Curiously, this act of Islamic terrorism is being blamed on Christians.

She later tweeted that “the problem” is “misogynistic, racist hate.” How Kohn believes that an attack on dozens of gay men is an act of misogyny is anyone's guess.

Blaming people of faith is old hat(e) for Kohn, who previously linked the so-called “war on women” to an uptick in domestic violence.

But she hasn't always blamed people of all faiths equally. In 2007, she wrote an article titled, “Why I Have a Little Crush on Mahmoud Ahmadinejad.” (The story has since been deleted but is preserved here.) While she admits the former president of Iran instituted the legal system that oversees the “executing of gay folks,” she wrote, “I can't help but be turned on by his frank rhetoric” about American foreign policy.

Had Kohn's targeting Christians been an aberration, it would have been galling enough, but soon the Left piled on to blame Christian conservatives for the actions of a Muslim who is also a registered Democrat. ACLU attorney Chase Striago tweeted:

The Christian Right has introduced 200 anti-LGBT bills in the last six months and people blaming Islam for this. No. #PulseNightclub

Their criticisms miss the mark because, by definition, no Christians choose to affiliate with the Islamic State (ISIS). The fundamentalist strain of Islam that produces jihadist violence has no comparable counterpart within Christianity.

A traditional Christian ethic begins by recognizing, far more consistently than our critics, that all human life is sacred – gay or straight, white or black, male or female, able or “disabled,” born or unborn. All acts of murder or vigilantism break the social norms instituted in Western Civilization by its Christian influence since the faithful crawled out of the catacombs after vanquishing their more barbarous predecessors.

Our appeal to others is best expressed by a simple Latin phrase, caritas in veritate – “love in truth.”

We know from experience that a true friend is not one who affirms every notion that enters our minds – the one who tells us, “Sure, kid, knock yourself out” – but the one who points out that negative consequences lurk behind seemingly inviting choices. It is love, not hate, that reveals the abiding pain masked by momentary pleasure, and vice-versa. If we state, truthfully, that homosexual sexual intercourse has negative physical and emotional effects, such as making its practitioners 44-times more likely to contract HIV/AIDS, it is not with disdain or celebration, but as a loving act of concern from one sinner to another, equally precious child of God.

A Christian would consider himself successful if a homosexual he convinced to embrace celibacy outlived him.

Sadly, this approach seems to be lacking in the fundamentalist Muslims with whom the Left has plighted its political troth since 9/11. We hope this weekend's “executing of gay folks” gives Kohn and other radicals pause about openly sidling up with Islamic leaders determined to kill Americans.

There is a cavernous gulf between not desiring for a grown biological male to shower next to an elementary-age girl and, say, picking off homosexuals with high-powered rifles – an ideological space the vast majority of Americans happen to inhabit. Impugning their motives and dismissing the thoughtful concerns of progressive activists such as Maya Dillard Smith is malicious, fallacious, and intellectually dishonest.

As America's heart collectively cracks, people of faith rightly join in the grief of these fellow children of God whose lives ended too soon.

Let's have a no-holds-barred national conversation about which homeland security and immigration policies could prevent Islamic extremists, whether foreign or native-born, from again shedding the blood of a single American on our soil.

Let's broaden the discussion about homosexuality to give at least a passing mention to which health programs, school curricula, and personal behaviors best advance the health and well-being of society in general and children in particular.

And let's stop pretending that the enemy is Christians motivated by love rather than those who target Christians and homosexuals alike in the most searing examples of hatred.

Once we litter the ground with the corpses of the endless straw man arguments deployed by the Left, we may find we're not standing far from common ground.