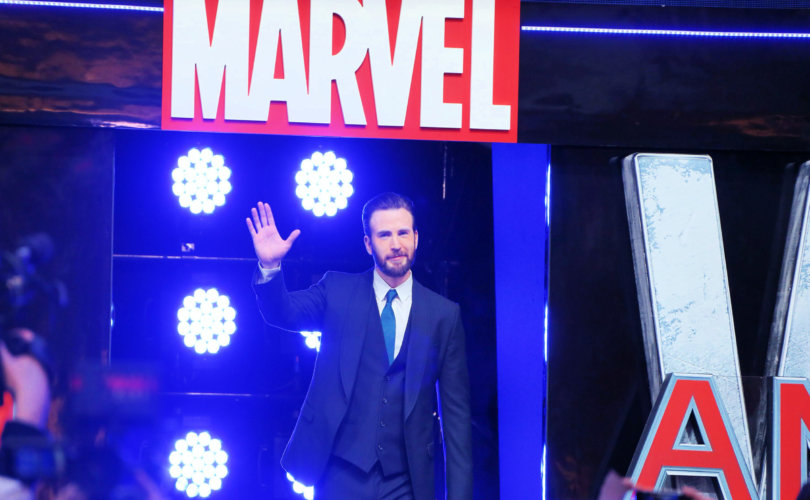 (LifeSiteNews) — Chris Evans, famous for playing Captain America in recent Marvel movie releases, very publicly condemned as “idiots” and “dinosaurs” those who have objected to a homosexual kiss in the just-released Disney Buzz Lightyear prequal movie in which he provides the voice of the title character.

For some reason, the middle-aged, never married, greenscreen actor who has no children felt qualified to issue guidance to parents who are actually raising children whom they love.

But American parents with young children have long been punching back against the Walt Disney Company’s extreme woke guiding principles which include exposing children to as much homosexuality, same-sex marriage,  transgenderism, and demonism as they think they can get away with.

“No one goes to the movies to be made uncomfortable, and parents don’t take their kids to the movies — most especially a Disney movie — to expose them to human sexuality before they are ready,” responded Breitbart’s John Nolte.

“The child groomers at the Walt Disney Company decided to gay up the Toy Story franchise, and … it bombed all over the world,” wrote Nolte. “Do you have any idea how insane and out-of-touch Disney must be to invest $300 million in a movie that includes homosexuality? And not just any kind of movie—a kiddie movie. And not just any kind of kiddie movie, a Toy Story movie!”

Disney has lost over $170 billion —170 BILLION DOLLARS— in corporate value over the last year.  Put differently, Disney Co. is worth less than half of what it was worth just a year ago.

Who is teaching whom?  Disney has been taught an astronomically valuable $170 billion lesson, a lesson that evidently has yet to penetrate Chris Evans’ thinking.

Should Evans be tutoring parents? Of course not.  The serial starlet dater needs to listen to parents who seem to have unanimously voted with their feet, staying away from Lightyear in droves, causing the feature to fail miserably at the box office during its opening weekend.

Evans has a long track record of condemning Christians for their beliefs.  In 2019 he took aim at Alabama legislators for banning abortion in their state, saying, “This is absolutely unbelievable.  If you’re not worried about Roe v. Wade, you’re not paying attention.”

Evans stands for sodomy and abortion, two of the worst components of paganism.

By condemning Christian parents as “idiots” and “dinosaurs,” Evans indicts himself.  He envisions a world free from Christianity, a pre-Christian world.  A pagan world.

Yet Christianity is the best thing that ever happened to women’s and children’s rights.

“In ancient Greece and Rome, children were considered nonpersons,” noted Pascal-Emmanuel Gobry in an article titled “How Christianity invented children.”

“Various pagan authors describe children as being more like plants than human beings.  And this had concrete consequences,” he wrote. “… [A]ccording to all the evidence we have, the sexual abuse of children (particularly boys) was rife.”

Christianity made pedophilia a moral issue. As Christianity slowly evangelized the pagan Roman Empire, the widespread acceptance of men having sex with boys was replaced by widespread moral revulsion (and the appearance of anti-pedophilia laws that followed upon it). The same is true as well for homosexuality, sexual slavery, abortion, infanticide, and euthanasia. They became moral issues, rather than accepted pagan social practices, only because of Christian evangelization.

The sole reason that there are still secular laws on the books that prohibit and punish pedophilia is that Christianity came to dominate culture in the West through evangelization. The only reason that we have accepted homosexuality in culture and in law is the increasing de-Christianization of the culture in the West. As we become even more secularized (i.e., repaganized), pedophilia will soon be accepted, just as homosexuality, abortion, infanticide, and euthanasia have already been embraced.

Things were bad for boys before Christianity changed the world, but things were worse for girls and women.

“To say that Rome was distinctly anti-woman is an understatement,” wrote Dr. Jeff Myers in Understanding the Culture: A Survey of Social Engagement.

Families typically kept all their healthy boys and their oldest healthy girl. Other daughters were left to die as infants. Surgical abortion was available, and women often died from it or were left maimed. Surviving girls were typically married off at age twelve and were pressured into remarriage when widowed.

Christians opposed these practices. They took in abandoned infants, condemned surgical abortion, allowed girls to remain unmarried until they were ready, and provided support for widows.

Is this the type of world to which Evans would like to drag the U.S. and the western world back to? A world where those not killed in their mothers’ wombs are treated as non-persons, as sex-objects, as nothing more than fodder for the sexual revolution?

His public rejection and condemnation of Christians and Christian morals imply that he does.