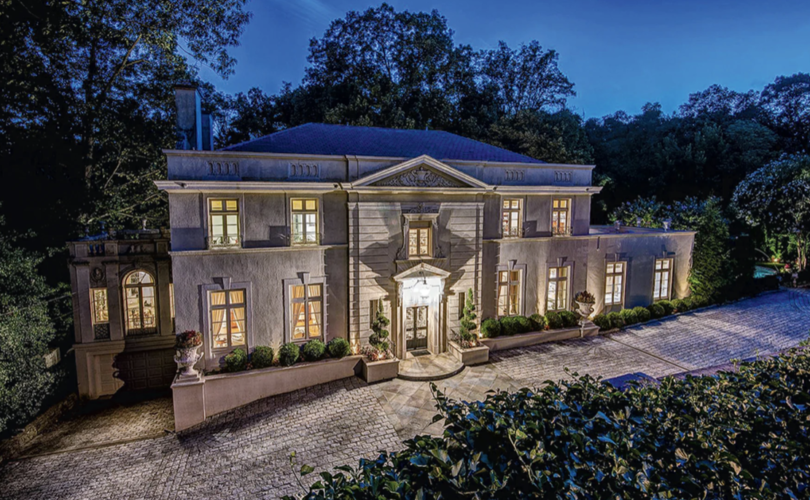 This is the second in an ongoing series on the problematic rise of LGBT influence in conservative and GOP circles.  The first commentary can be found here.

WASHINGTON, D.C., (LifeSiteNews) — The most consequential residential real estate transaction to occur in the nation’s Capital this year is gay Republican billionaire Peter Thiel’s recent purchase of an opulent $13 million mansion, located in a cluster of exclusive northwest D.C. neighborhoods that might be described as the Bermuda Triangle of wealthy national influencers.

While there are plenty of reasons a billionaire businessman like Thiel would want to establish a presence in Washington, D.C., the fact that he’s a homosexual “married” to a man and is increasingly exerting influence in Republican politics as well as among conservative academics and influencers is reason for alarm.

With its large, sumptuous entertaining rooms, the Beaux-Arts residence —like others of its pedigree in DC— is designed for hosting large parties, to impress, to facilitate networking, and to seal deals.  The sell-out crowd at the black tie gala for Log Cabin (LGBT) Republicans hosted by Donald and Melania Trump at their Florida Mar-a-Lago resort home earlier this month established a benchmark for future such events.  The lavish soirée was a signal broadcasting just how much political power and money is driving the normalization of homosexuality, same-sex marriage, and transgenderism within conservatism.

Republican National Committee (RNC) Chairwoman Ronna McDaniel, who was presented with Log Cabin’s Majority Maker Award at the Mar-a-Lago event, used that opportunity to announce the launching of the “first-ever RNC Pride Coalition,” in time for next year’s midterms.

“This is, of course, a moronic electoral strategy,” observed The American Conservative’s Declan Leary.  “Painting the elephant rainbow will drive out 20 conservatives for every one [gay former Ambassador and Director of National Intelligence, Ric] Grenell it brings into the tent.”

“[W]hile prominent Republicans who live that lifestyle are saying they are not going to make sexual orientation the be-all, end-all, center of everything they do, then what exactly is the point of this coalition and PR campaign?” wondered Family Research Council President Tony Perkins in an email.

McDaniel later backtracked her announcement after being slammed by conservative GOP stalwarts Perkins, U.S. House Rep. Marjorie Taylor Greene (R-Georgia), and others, but that doesn’t mean McDaniel’s stated planned operation is dead.  It will quickly be revived in some other form but quietly, without the fanfare. LGBT forces plan to sink deep roots within the GOP and transform it —mutate it— further shifting what’s left of American culture toward peak sodomy and peak genderlessness while relegating the nuclear family to a distant memory.

The cadre of U.S. House Republicans surrendering to transgender supremacy

Another D.C. politico who was presented with an award at the Mar-a-Lago bash was U.S. House Rep. Chris Stewart (R-Utah) for having corralled 20 other GOP House members to co-sponsor the Fairness For All Act (FFAA), a bill which seeks to balance nondiscrimination protections for gay and transgender Americans with protections for people of faith, but which in reality would ultimately give away the farm.

“[M]embers of the House GOP are pushing forward with an effort to write SOGI [sexual orientation and gender identity] into civil-rights law,” wrote National Review’s Nate Hochman in a commentary titled, “21 House Republicans Wave the Pink and Blue Flag.”

“Why are they supporting legislation that could arm the transgender movement’s already robust efforts to silence dissent with the full force of the civil-rights bureaucracy?” asked Hochman, concluding that the 21 are “legislating as if they have already lost” to transgender forces.

In addition to these 21, Log Cabin counts 17 members of Congress as allies, including Dan Crenshaw (R-Texas) and Madison Cawthorn (R-North Carolina).

This is a major current flowing just below the surface in most conservative circles, not just Congress.

Republican Glenn Youngkin surprised liberal pundits and politicos when he snatched the Virginia Governor’s race from Democrat Terry McAuliffe.  But rather than embracing his election victory as a mandate to govern as a conservative, he’s showing his true colors as a weak establishment Republican.

After winning, Youngkin quickly indicated that he will not stop local governments from mandating COVID shots and masks.  Perhaps more troubling is the hiring of a top male aide who has promoted the Congressional LGBTQ+ Equality Caucus and has posted on social media pictures of himself posing before LGBT rainbow banners while wearing a PRIDE blouse and short women’s skirt.

In a second posting, wearing the same bizarre outfit he stands with a few others with the words “My God, These B*tches Gay” plastered over the image.

“Youngkin got elected on culture war issues about race and sex,” said Pedro L. Gonzales, associate editor of Chronicles Magazine and fellow at the Claremont Institute, at the beginning of a series of Tweets.

“So, Youngkin chose a guy with pronouns in his bio to do his [communications] who also served on the Georgetown Latinx Leadership Forum and supports virtually everything Youngkin’s voters voted against,” said Gonzales.

Youngkin got elected on culture war issues about race and sex

So, Youngkin chose a guy with pronouns in his bio to do his comms who also served on the Georgetown Latinx Leadership Forum and supports virtually everything Youngkin’s voters voted against

This is peak GOP pic.twitter.com/WWziJNO4g3

“I’m not surprised by any of this, just the speed at which Youngkin is sinking the knife into people’s backs, it has to be some kind of land speed record for the GOP,” continued Gonzales.

And then the Claremont Institute fellow dropped a truth bomb: “The new GOP is actually worse than the old GOP,” he wrote, referring to the newly emerging conservative coalition which treats homosexuality, same-sex marriage, and transgenderism with a shrug of the shoulders.

“Hard to fight a culture war in Loudoun (Virginia) about teachers being fired for refusing to use pronouns when he’s likely running part of the Governor-elect’s Comms,” Tweeted NoVA Campaigns about Youngkin’s new communications aid.

It doesn’t get better. Hard to fight a culture war in Loudoun about teachers being fired for refusing to use pronouns when he’s likely running part of the Governor-elect’s Comms. pic.twitter.com/r27RV8x72C

There’s a battle going on for the soul of the newly emerging conservative political coalition, involving issues of enormous consequence for the future of our nation, but which remain off the radar of many engaged observers.

Here’s what’s at stake: Will conservatives assert the immutable nature of human beings as male and female, or will that which is known by science and clearly visible in nature be tossed into the dumpster of history in favor of misguided political opportunism? Will the GOP continue to recognize the supreme importance of complementarity?

Put another way: As gay, lesbian, and transgender individuals rightly stream away from the Democrat Party and find a new home under the Republican tent, the GOP must assert more clearly and boldly than ever that marriage is between one man and one woman; that there are precisely two sexes; and that nobody is “born in the wrong body” or “born that way.”

These are non-negotiable for conservatives, for Christians, and for all thinking, reasoning people.

Conservative elites, whether members of the political, academic, media, or corporate classes, need to once again relentlessly pursue intellectual honesty and integrity regarding creeping LGBT influence within their ranks.

List of the 21 Republican U.S. House Representatives co-sponsoring the ill-conceived “Fairness For All” Act (FFAA):

List of 17 Log Cabin Republican congressional “allies,” some of whom are also co-sponsors of the “Fairness For All” Act (FFAA):