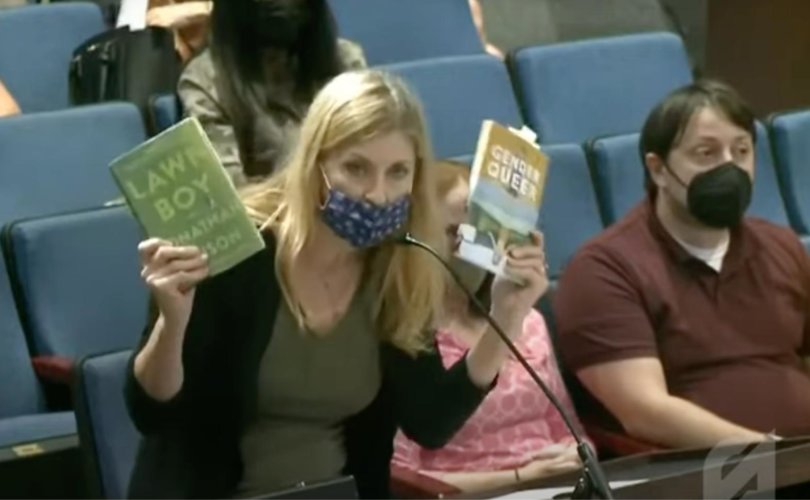 (LifeSiteNews) — As the parental rights movement against the sexualization of children heats up, we’re now seeing direct action being taken from parking lots outside of bars to school board meetings — and we’re getting a good look at what sort of action is effective, and what protests are not. Let’s look at two recent protest actions by concerned parents. We’ll call it a tale of two protests.

In Dixon, Illinois, over 100 parents and other concerned members of the community converged on a public meeting of the Dixon Library Board on Monday, June 13. The New Guard, a publication of the Young America’s Foundation, had recently published an article exposing the presence of a number of pornographic books targeted to young people and being seen by children in the library, and the parents were upset. At the meeting in Dixon City Hall, it was standing room only, with parents lined up into the hallways.

As one attendee put it, “I’m here on behalf of my five grandkids … pornography is pornography. I would no more expect to find a copy of Playboy magazine in the library than I would these books.” Another stated, “This specific book, Gender Queer, displays people performing sexual acts on each other, and should not be proudly displayed for anyone to view. We don’t understand why society is pushing such sexualized content on our children, of all ages, especially young children.” Another mom: “We can clearly see the depravity of our society when we even have to have a meeting to discuss the point that our children should be exposed to pornography.”

The result? The books will be made unavailable until a thorough review of obscene materials is done. The parents showed up, voiced their opinion, and got a response. This is effective grassroots action at its best.

Now let’s look at a second protest, at a Drag Queen Story Hour event at a library in San Francisco. I covered this story in this space earlier this week and noted my concern with the two men who showed up, shouted “pedophile!” in front of children, and ended up calling parents “whores.” Since I wrote that story, there have been other developments. First, the drag queen in question has absolutely said horrifying, perverted, pedophilic things. I don’t recommend watching it, but The Post Millennial has released a music video of this person singing the lyrics “all the kids who look up to me can s*ck my d*ck.” This person was chosen to read stories to kids and parents took them. It is vile and appalling.

The men who showed up were thus justifiably outraged. After seeing that video, how could they not be? But one of the men was wearing a black t-shirt with the slogan “Kill Your Local Pedophile” and a picture of a machine gun on it. Regardless of your thoughts on this sentiment, this completely undermines what could have been very effective direct action. Instead of an investigation into the drag queen’s vile online videos about sex with children and why a library invited this person in, the men who showed up are being investigated by the sheriff for hate crimes.

This movement in defense of children and their innocence is one of the most encouraging things of the past several years, especially because it has proven to be genuinely effective at achieving change. But for that effectiveness to continue, we need to ensure that our passion is controlled and directed. It should not be parents and protesters who are getting investigated; it should be those who openly boast about the sexualization of children. That means no threats of violence. That sort of behavior is profoundly unproductive — and could make us lose winnable battles.