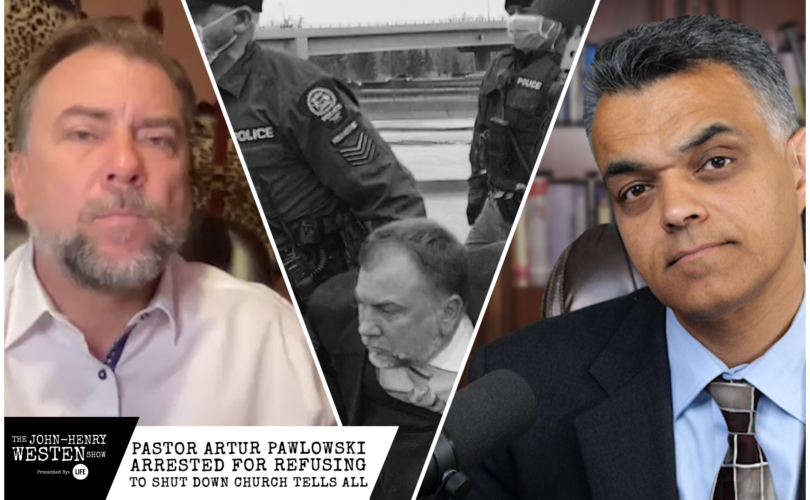 May 21, 2021 (LifeSiteNews) — Today I sat down with Pastor Artur Pawlowski, the Canadian pastor whose videos of chasing what he called “Nazi Gestapo” police and health inspectors away from his church went viral around the world. We discuss the incidents during and after his highway arrest, as well as the deplorable conditions while he was in prison and what Christians must do to withstand religious persecution while also standing for truth.

Pastor Pawlowski describes how prior to his arrest, the Calgary Police brought SWAT teams to his church “to suppress, to intimidate, [and] to harass” his peaceful and prayerful assembly. He notes that after being handcuffed and dragged away by police on the highway, he and his brother Dawid were put “in solitary confinement [and] not allowed to sleep” due to bright lights, constant banging on the door by officers, and only a concrete floor to lie on.

Despite being put through these cruel and horrific conditions, which are reminiscent of Communist nations, some of the prison officials were sympathethic to him and tried to treat him as a human being. The pastor tells me that “in every governmental department there are humans, the good people, and there are monsters, the gangsters, the evil people, and Gestapo type of individuals.”

Pastor Pawlowski also mentions that months of attacks from politicians and media stories portraying him “as a white supremacist and superspreader” of the virus have been the cause of vigilante action against him. Recently, Pawlowski’s house was targeted by arsonists, who set his garage on fire. He notes how these actions inspired by government and media are the next step in the persecution. “They want my children dead. They want my wife to die. They want me to be murdered.”

He tells me of how the experience of having grown up under Communist-occupied Poland, and having heard first-hand about Nazi atrocities in his native country, has motivated him in these times. He says that persecutions of Christians across Western nations like Canada are a sign of a “Communist takeover,” masquerading behind “health protocols.”

Pawlowski calls on all Christians to rise and stand up to the medical tyranny and religious discrimination by governments, and to “push the darkness away” from all institutions with courage and bravery. He points out that if every pastor and clergyman would fight for the faith in Christ like he is doing, “this whole fight would be over. We would win within a day.”

Pastor Pawlowski is in urgent need of your help to fight attacks ont the right to religious liberty in Canada. Please consider making a secure donation today by visiting his LifeFunder page here.