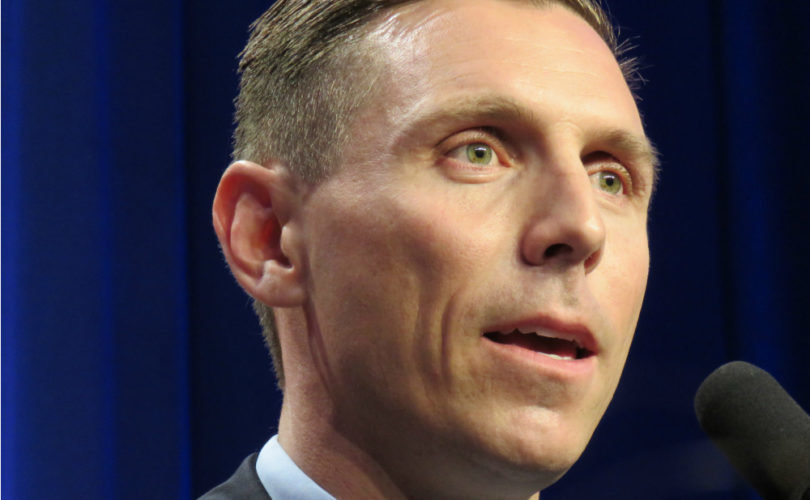 Sept. 21, 2016 (LifeSiteNews) – So Progressive Conservative shape-shifter Patrick Brown has gone from pandering, in Chinese, to opponents of to the sex education curriculum, to grovelling in support of that same curriculum, in English, in the Toronto Star, while hoping no one would notice. Now, in response to the Toronto Sun’s recent revelations that he had made promises to social conservatives on many issues important to them—I was at one private meeting of social conservatives where a prominent Brown staffer promised passionately, tears and all, that “Patrick” was on our side—he has penned an open letter, posted to his Facebook page, in which he even further repudiates us.

In the letter, he firstly announces that he is a “pragmatic Progressive Conservative,” which apparently means his promises mean nothing and he’ll whore himself out to anyone in order to get elected. Or, as he puts it, that “means being willing to change your mind when presented with compelling evidence.” Which is why, apparently, he was against the sex-ed curriculum in Chinese, and for it in English—because there was compelling evidence that Chinese parents are concerned about the curriculum while readers of the Toronto Star are very supportive of it.

Brown then gravely informs us, presumably with one eye on the shifting polls, that his views “have evolved.” He opposed the sex-ed curriculum originally because Kathleen Wynne didn’t explain it properly to all the stupid parents who disagreed with it. But now he is planning to ignore such parents entirely. Why? He has “since come to the conclusion that significant opposition to the curriculum was rooted in a refusal to accept LGBT elements into the curriculum.” In other words, Ontario parents like Naveed Bahadur, who was shocked and upset when his five-year-old son came home from kindergarten announcing that his teacher had told him he could marry a boy, are irrational homophobes.

Of course, Patrick Brown was fully aware of this all along. He knew what social conservatives cared about. That’s why he pandered to them and emailed them and sent his staffers to our meetings. He knew that social conservatives were hopeful that he’d be a voice for them because of his pro-life and pro-family voting record in the House of Commons, which, by the way, he took the opportunity to recant in his open letter. If you’re going to throw it all in for the Toronto downtown elites, you gotta give them all the good stuff: renunciation of former allies, referring to previous positions as “phobic,” public confession—dance, Patrick, dance! Good boy.

Brown’s open letter lays out exactly why he now opposes social conservatives. “The curriculum,” he writes, “must take into account changing attitudes and the world in which children will grow. They are being asked to understand challenging topics in ways their parents were not.” Translation: parents have retrograde views that are unacceptable to Patrick Brown and the sex ed curriculum architects, and thus the public school system will do its part to purge the views of the parents from the minds of the children. This is precisely why thousands of parents from all cultures and walks of life have been protesting so vigorously in the first place.

Which brings me to Brown’s condescending non-apology: “I’m sorry that Mr. Fonseca and members of his group are upset. But I’m running to lead all Ontarians.” Uh, no you’re not, Patty. You must have missed the thousands and thousands of people—not “members of Mr. Fonseca’s group”—protesting offices across the province and rallying in front of Queen’s Park. These are the people you have just insulted. And we’ll be sure to let them know in their own language, in cased they missed you apologizing for them in English.

To add insult to betrayal, Brown openly states that he does not accept the concerns of Christian, Sikh, Hindu, and Muslim parents because he doesn’t want to open “the door to intolerance.” He is “determined,” he says, “to lead an Ontario PC Party that is modern, inclusive, pragmatic, and that reflects the diversity and values of our province. To me that means one that is fiscally conservative and socially progressive.” In other words, he wants to lead a party that does not include social conservatives or any of the thousands of concerned parents who want to be the primary educators of their children on sexuality. He can’t help the flip-flopping, though. “It’s who I am,” says Brown. Politicians and snakes have a lot in common, after all—they both have forked tongues and they can both shed their skin when they find it inconvenient.

But finally, at least, he ends with some good advice. “If you want a rigid ideologue as a premier”—and no one would accuse Brown of being firm, much less rigid, on anything—“vote for someone else.”

Well, don’t mind if we do. This brings me to a topic I’ve been meaning to write about since my column on why Conservative politicians are embarrassed by social conservatives: We need to stop being nice. The reason people like Patrick Brown believe they can take advantage of us is that they are positive we have no one else to vote for. He is positive that we will not vote for Kathleen Wynne, because he knows that she is the antithesis of what social conservatives stand for. So he’s calculated that he can be a Kathleen Wynne with slimier hair, and we’ll still vote for him because maybe he won’t blow as much of the taxpayers’ money. And then we all have to be happy, because the Conservatives are in power again, even though it doesn’t make any difference for those parents who want the right to pass on their values to their children.

Social conservatives, as I’ve written before, are not numerous enough to single-handedly put someone in office. However, we are numerous enough to ruin the career of someone like Patrick Brown, who has managed to lie to us, betray us, call us intolerant bigots, and then shruggingly suggest we vote for someone else in the confidence that we won’t. If we keep letting politicians like Patrick Brown treat us like that, we are simply ensuring that no politician will ever take us seriously, because they can have their cake and eat it too—they can get so-con votes while telling the Toronto downtown elites that they think we’re kind of repulsive. I think it’s time for social conservatives to show that we care more about putting someone Conservative in power. We have real concerns that need to be addressed, and if Patrick Brown is an impediment to that, then we should treat him as such.