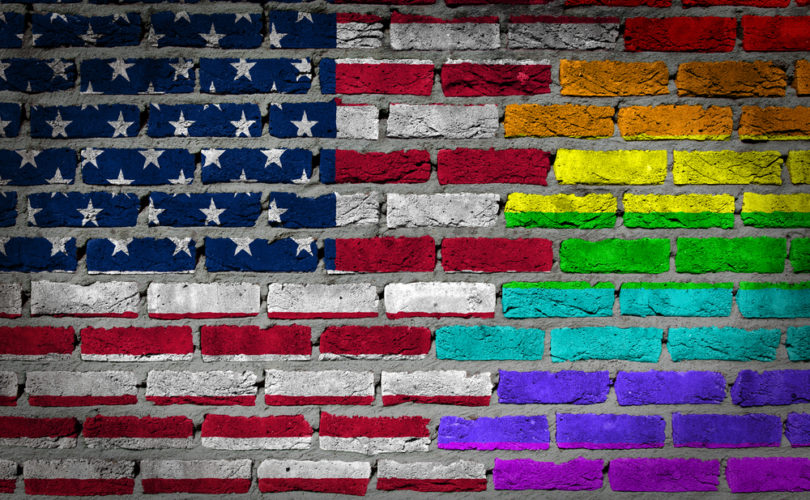 June 2, 2021 (Radiance Foundation) It’s interesting how we move from the self-sacrifice of soldiers who’ve died for our freedoms into a month of self-obsession from LGBT activists who demand we give up our freedoms. We go from memorializing the courageous to merchandising the outrageous. In the process, we’re told to be good automatons and embrace “equality.”

Corporate America doesn’t rebrand itself for a whole month in red, white, and blue to show any devotion to the USA. (May was designated Military Appreciation Month in 1999 by Congress, by the way). They don’t ever celebrate America’s rich religious heritage. They don’t raise flags and release special product editions for other people groups. But they’ll proudly dip their logos into the shallow pool of rainbow colors to show their devotion to LGBTQXYZ. This June, companies, medical associations, school systems, city councils, colleges and seminaries will fall over themselves to be the most LGBT. They’ll splash co-opted rainbows all over their social media profiles, posts, and products.

It gets better, right?

Well, it depends on whom you talk to. What about the ones who’ve “de-transitioned” or (more accurately) those who ultimately embrace the sex determined by DNA at their conception? What about the spouses left behind in marriages left in ruins? What about a precious teenager I know who is celebrated because she “came out” but the affirming crowd completely ignores her parents’ drug addictions and years of molestation from her father?

Will corporations be at the other end of their plastered rainbows to pick up the broken pieces of lives that need more than sparkly glitter and clever hashtags? Will pro-LGBT legislators be there to care for the children languishing in foster care at increasing rates because they allowed faith-based adoption agencies to be shut down by Big LGBT?

The Church of Corporate America has decreed that the only sin is rejecting their doctrine of wokism. Curiously, capitalism is blasted as irreparably evil by today’s social justice warriors unless it forces its religion onto everyone in the workplace and the marketplace.

I won’t change my language, the colors on my profile, or my life-long worldview. My conviction is beyond the temporal nature of politics. It’s rooted in something eternal. There are truths about human identity that never change, no matter the cultural tides, no matter the public polling. Christ calls us in John 13:34 to “love one another” as He has loved us. Christ never embraced a lie. He affirmed that God made us “male and female” in Matthew 19:4-6 and spoke of marriage between one man and one woman.

In a day and age where cultural appropriation is heavily denounced by the Left, it’s perfectly okay (somehow) for the appropriation and complete distortion of religious symbols. The origin of things matters. The creator of the rainbow flag, drag-performer and artist Gilbert Baker, was “inspired by the Bible” according to CNN. “The rainbow’s in the Bible. It’s a covenant between God and all living creatures,” Baker acknowledged without the context that the world was destroyed by a flood because of all the things the Bible details as sinful. Baker continued in his advocacy of “coming out”: “You can live in this light of the truth. It’s totally liberating. You don’t have to live a lie. Living a lie will mess you up.”

Yes. Living a lie does mess you up. Ask former homosexuals. Their stories are heartbreaking and inspiring.

I’ll always love the individual, no matter what he or she is going through. But I won’t tolerate a reckless activism that invites millions—especially children—into confusion and depression. I know the difference between love and tolerance. Love lifts people out of their circumstances. Tolerance keeps people where they are and pretends there are no circumstances.

I won’t bow to the cult of LGBTism. I won’t call a boy a girl any more than I would refer to Rachel Dolezal as “African-American.” If self-identity must be acknowledged as reality, then I identify as a Twitter and Facebook user whose content isn’t shadow-banned or censored.

Our very language is being controlled by those who decry discrimination while being sure to discriminate against those who believe in basic biology and Constitutional free speech. Pronouns, for instance, are not hate. They simply describe the core of who we are. But if the (In)Equality Act is passed, anti-pronoun and anti-science codes that currently exist in NYC, DC and CA will become federalized. We’ll be forced to recognize an individual as two or more people.

When did confusion become a virtue and clarity a vice?

Virginia physical education teacher Tanner Cross understands the difference and lovingly expressed, in a school board meeting, why he wouldn’t cave to the school’s transgenderism dictate. He, like millions of other parents, sees the emotional and physical harm done to children by denying our very identity. Days later, Loudoun County Public Schools (LCPS) sent Cross a letter putting him on administrative leave stating he “engaged in conduct that has had a disruptive impact on the operations.” Apparently, that conduct is exercising his First Amendment rights.

“I love all of my students, but I will never lie to them regardless of the consequences. I’m a teacher but I serve God first and I will not affirm that a biological boy can be a girl and vice versa because it’s against my religion. It’s lying to a child, it’s abuse to a child, and it’s sinning against our God,” Cross expressed in a short but moving speech (see here at 1:48). The Loudoun County Public Schools Propaganda System, via its arrogant activist school board, won’t tolerate informed dissent.

I’m all about individual freedom. But if your “equality” robs me of my (actual) Constitutional rights, I’m not going to bow and wave an LGBT flag of capitulation. I’ll keep on standing firm in my faith (which is constantly reinforced by science), love people enough to speak the truth, and unapologetically wave the red, white, and blue. Now those are colors with which all Americans, in a diverse nation richly blessed by God, can be proud.

Reprinted with permission by Radiance Foundation