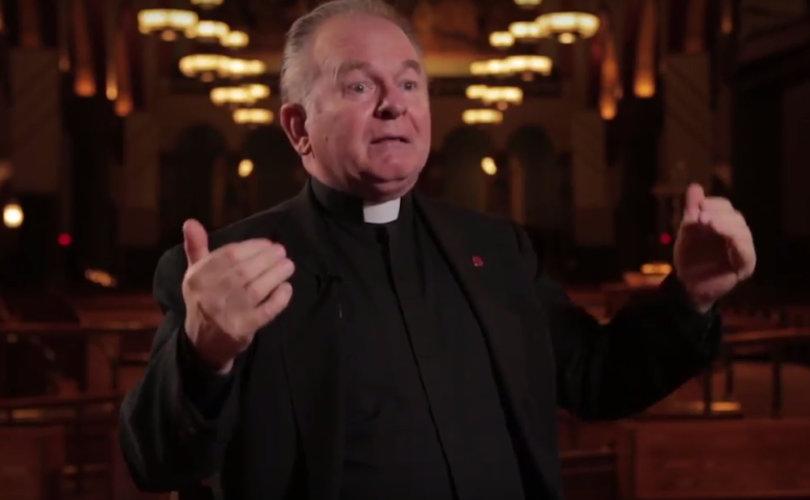 Conroy resigned yesterday after allegedly being given an ultimatum by Speaker Ryan.  According to a report by The Hill, “Four different sources—two from each party—say Conroy was told that he must retire or that he would be dismissed.”

While those who serve as House Chaplain are expected to conduct themselves in a non-partisan manner, many sources are saying that Speaker Ryan wanted Rev. Conroy out because he had aligned himself with liberal Democrats.

Conroy said that Speaker Ryan had recently told him, “Padre, you just got to stay out of politics.”

In the wake of Conroy’s dismissal, NBC reports, “More than 70 Democratic lawmakers have signed a letter demanding answers from Speaker Paul Ryan about his decision to oust the chaplain of the House of Representatives.”

Most of the Catholic Democrats questioning Conroy’s resignation have long histories of voting in favor of abortion as well as gay and transgender issues.

Congressman Maloney is an out gay man “married” to a man.

Yeah we're angry. This is a shameful anti-Catholic move motivated by conservative extremists in Congress. https://t.co/KRRzCrbG2K

House Speaker Ryan is himself a Catholic.  It is not Rev. Conroy’s Catholic views which are at issue.  It’s his spurious views purporting to be Catholic.

As chaplain of the House, Conroy opened the proceedings each day with prayer.  More importantly, as Chaplain, Conroy served to provide pastoral counseling to the House community.

During his tenure as House Chaplain, Rev. Conroy’s presence has been seen as increasingly problematic by conservatives and faithful Catholics.  Conroy’s views have clashed with Church teaching on more than one occasion, especially with regard to LGBT issues.

His views on gays and lesbians appear to align seamlessly with those of his fellow prominent Jesuit, Fr. James Martin.

In an undated video interview published on Youtube March 31, 2015, Conroy declared that Catholic teaching on homosexuality is a “dead end.”

The high-profile chaplain suggested that Catholic teaching is outdated and has not kept up with the times.

Fr. Conroy thinks the Church has a big problem: “The problem … facing the Catholic Church is … what hope does that ever give for a gay or lesbian person who desires just as a heterosexual person desires to commit their life to someone in whom, as Catholics, they have found the presence of the love of Christ; the presence of the meaning of their life in that person.”

Conroy, who was nominated for the position in 2011 by former House speaker John A. Boehner, is only the second Catholic priest in history to serve as U.S. House Chaplain.

According to The Hill report, “Ryan, who is also Catholic, has appointed Rep. Doug Collins (R-Ga.), an Air Force Reserve chaplain, as well as Reps. Mark Walker (R-N.C.) and Tim Walberg (R-Mich.), both former pastors, to lead the search effort to find a replacement.”

“Rep. Mark Walker (R-N.C.), part of the group searching for the next chaplain, suggested someone ‘that has adult children, that kind of can connect with the bulk’ of lawmakers and the problems they face with children who ‘made some bad decisions’ or a spouse upset about the legislative schedule,’” according to a Washington Post report.