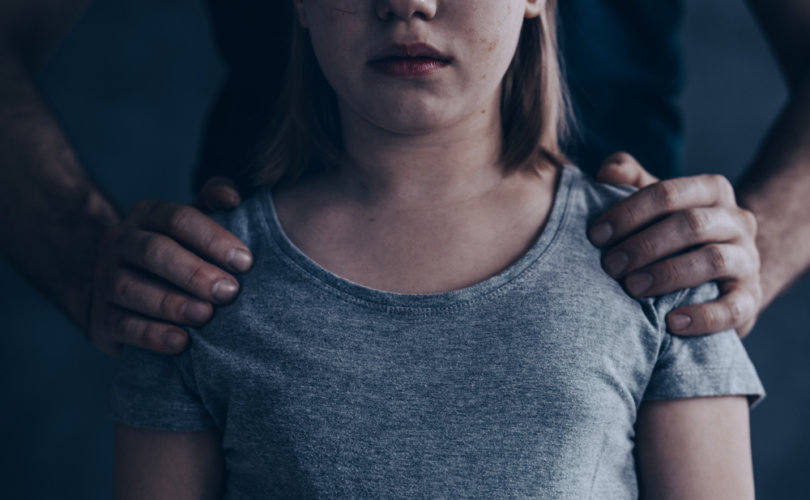 July 10, 2018 (LifeSiteNews) – A pedophile group is trying to destigmatize pedophilia by calling themselves “Minor Attracted Persons” (MAPs) rather than pedophiles.

Gay groups are up in arms because in the process the same pedophile group is claiming to be part of the LGBT community, even having gone so far as to create their own version of the rainbow flag for Gay Pride Month.

This should come as no surprise.

In essence, the MAP group is attempting to re-hitch its wagon to the gay community, which, for the sake of political – and judicial – expediency, distanced themselves from the pedophile cause beginning a few decades ago.

For the last dozen years or so, the gay rights movement has focused the lion’s share of its energy on what appear to many to be conservative issues: winning same-sex marriage and the right to openly serve in the military.

Yet the warm, fuzzy, family-oriented, “American as baseball and apple pie” picture of gay culture presented to the world by gay activists is a far cry from the movement’s origins in the 1960s and 70s when groups like NAMBLA (North American Man/Boy Love Association) were an integral part of their coalition.

The deep roots of the gay movement were overtly anti-religious and anti-nuclear family, and pretty much reduced all human beings to nothing more than sexual objects. “Gay Liberation” was always about sexual liberation for all, no matter what age.

It’s ironic that now that gays – and especially “married” gay and lesbian couples – are part of the establishment, they express revulsion over the pedophiles’ identification with gay rights.

The Prevention Network aims to rebrand pedophilia as a non-dangerous attribute of “Minor Attracted Persons,” who look but don’t touch, utilizing stories and testimonials to humanize would-be child molesters.

ThePreventionNetwork.org website declares that “everyone (including minor attracted persons or MAPs) deserves support.”

Here’s a sample of a story that attempts to appeal to readers’ sympathy while rehabilitating the reputation of MAPs as non-threatening good guys:

“John” was suicidal. He had been bullied by trolls on social media for most of his life for being different. The bullies were primarily people who claimed, based on their  religious beliefs, that “John” was going to hell and deserved to die. They described how they would kill him on his twitter page and people supported their hate. Desperate for help, John sought treatment for his shame, depression, and suicidality. Although he was scared to share about himself with a stranger, he felt desperate for help as he had NO desire to harm anyone, ever. Once he shared about his attraction to children, his therapist told him, “I don’t treat sex offenders.”

First, let's be clear. “John” is not a child molester nor is he a sex offender. He has an attraction to children. He is also fervent about helping prevent child sexual abuse by speaking out against it and by showing his support of global child sexual abuse prevention programs on his social media. “John” deserves support as do others who have a minor attraction. After all, isolation and depression are known to increase one's risk of doing something they might regret.

By the way, we have talked to “Janes” who are women who identify as anti-contact, non-offending pedophiles and like “John,” they have no desire to sexually harm children.

Gays warn kids: ‘This is flag for pedophiles’

To say that gays are alarmed by this move is an understatement. In referring to the above story, GayStarNews said:

Considering the long-standing trope that LGBTI people are rapists and/or child molesters, the fact those who actually have attraction to children are attempting to co-opt LGBTI spaces is disturbing.

Many on social media are warning LGBTI people and allies to be wary of the MAPs flag during Pride season. Additionally, many also called out the problematic nature of using a term like ‘minor attracted persons’ to normalize pedophilia.

Here is a sampling of gays, lesbians and their supporters trying to distance themselves from the MAP’s effort to cozy back up to the gay movement.  They want no part of the Pedosexual Rainbow Flag, and want to be the first to warn minors about the danger these folks present:

PSA TO MINORS: IF YOU SEE THIS “””PRIDE””” FLAG ANYWHERE BE WARNED
this flag is for MAPs, which stands for minor attracted person(s)
THIS IS A FLAG FOR PEDOPHILES pic.twitter.com/agx2ryySqx

Anyway folks both of these flags are for MAPS aka pedophiles.
The first one is the lesbian flag and lemme just say lesbians you deserve so much better.
Watch out for these PEDOPHILE FLAGS pic.twitter.com/lvo2l53kIG

A tweet by Angel Star chided the MAPs for plastering the photos of celebrities and superheroes over their rainbow flag:

@RobertDowneyJr @ChrisEvans @twhiddleston Alright, so, that right there isn’t just normal fan art, or fan pictures of you guys. I was looking up “MAP” stuff, hearing they are trying to get into the LGBT+ community. They stuck your faces on their flag. Let me explain what a MAP is pic.twitter.com/pZn06BXvQn

She goes on to explain:

A “MAP” is a “Minor Attracted Person.” Basically a pedophile. They go by lots of terms, like NOMAP and SOMAP and stuff like that, saying if they’re “non-offending” or they ask for consent from the child, that it’s okay. They say “don’t use pedophile as an umbrella term.”

But regardless of if it’s nepiophelia (infants), pedophelia (prepubescent) or ephebophelia (pubescent) it’s wrong and against the law. They’re putting your faces on their support flag. I just thought you might want to know. Maybe inform everyone else in the MCU that they’re going to be slapped on there, too. They’re using you guys a(s) a support system for being sexually attracted to children.

And here’s one that gets creative: “Unless MAP stands for “murdering all pedophiles,” stop f*cking calling them that.”

Unless MAP stands for “murdering all pedophiles”, stop fucking calling them that.

It may be hard for the LGBT “community” to peel off the pedophiles who seek to come back into the fold after having spent decades in the diaspora.

But they will try mightily to do so, otherwise they risk calling the public’s attention to their “anything goes” origins.