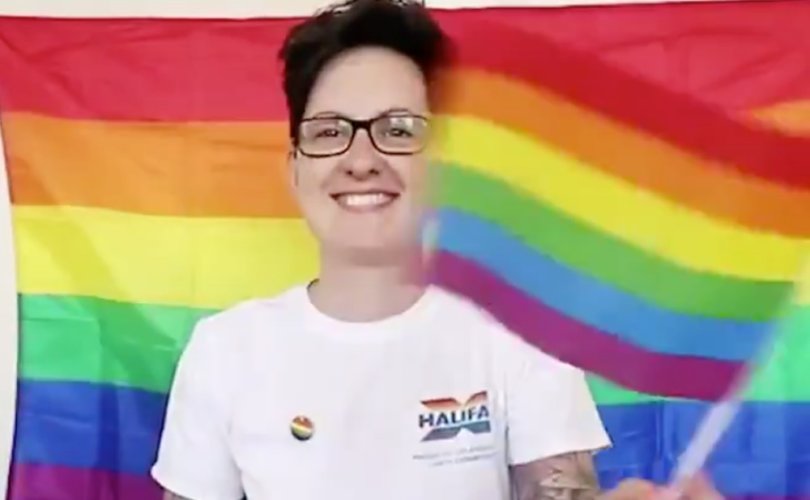 A still from a Halifax advertisement Screenshot/Twitter

(LifeSiteNews) — In his 1978 anti-totalitarian essay “The Power of the Powerless,” the Czech dissident Vaclav Havel explained the power of the reigning ideology over ordinary men and women, and the ways in which apolitical people could be forced into either signalling their support—or taking a stand—in Communist regimes:

The manager of a fruit-and-vegetable shop places in his window, among the onions and carrots, the slogan: “Workers of the world, unite!” Why does he do it? What is he trying to communicate to the world? Is he genuinely enthusiastic about the idea of unity among the workers of the world? Is his enthusiasm so great that he feels an irrepressible impulse to acquaint the public with his ideals? Has he really given more than a moment’s thought to how such a unification might occur and what it would mean?

I think it can safely be assumed that the overwhelming majority of shopkeepers never think about the slogans they put in their windows, nor do they use them to express their real opinions. That poster was delivered to our greengrocer from the enterprise headquarters along with the onions and carrots. He put them all into the window simply because it has been done that way for years, because everyone does it, and because that is the way it has to be. If he were to refuse, there could be trouble. He could be reproached for not having the proper decoration in his window; someone might even accuse him of disloyalty. He does it because these things must be done if one is to get along in life. It is one of the thousands of details that guarantee him a relatively tranquil life “in harmony with society,” as they say.

Rod Dreher referenced Havel’s work in his books on how Christians should respond to the post-Christian age, The Benedict Option and Live Not By Lies. The Communist badges, he noted, have now been replaced by the various manifestations of rainbow swag that swamp business windows, bank kiosks, and public transit come Pride Month (and, increasingly, beyond). But at least business owners have some measure of choice—it is not as if they have to specifically opt out of the practice. They can simply decline to participate, regardless of how noticeable that is rapidly becoming.

READ: Survivors of Soviet communism are warning the West is becoming totalitarian. Here’s a manual for resisting

Soon, however, those who do not wish to celebrate the new ideology may be forced to declare themselves. Earlier this month the Daily Mail broke the news that the Scout Association is facing backlash for introducing badges for their members—a “bisexual fun badge,” a “lesbian fun badge,” a “Pride fun badge,” and a “trans fun badge.” The badges feature the traditional Scout fleur-de-lis symbol backed by patterns associated with the LGBT movement, such as the Pride flag or transgender flag. The children were told that they should “celebrate inclusion…with our Pride collection” and could purchase this Pride swag (which includes socks, hoodies, and scarves) “to support the LGBT+ community.”

Of course, this means that those who choose not to deck themselves out with Pride swag are being explicitly unsupportive and have to essentially out themselves as non-allies. One critic told the Mail that “asking children to be allies” for an adult movement is wrong, but of course LGBT activists do not see their movement as a primarily adult one. Colonizing groups like the Scouts was always part of the plan. Now Scouts are being given the opportunity to say that “trans is fun,” whatever that means. I was a Boy Scout for several years, and I cannot imagine the reaction our leaders would have had if someone proposed “bisexual is fun” badges for all the boys.

The Halifax banking company in the UK, however, has met with more problems after they decided to genuflect towards their cultural masters by introducing pronouns on employee badges. After some customers complained, the social media team for Halifax told them they were free to take their business elsewhere. Their tweet announcing the policy went viral, and customers started to take their advice, with one media outlet noting that Halifax has reportedly lost in excess of £450,000 in investment accounts and savings today after customers closed their accounts, cut up credit cards, and headed to different banks. Halifax had been counting on a no-risk move that would win them support; instead, their pronouns campaign “has been branded one of the worst PR disasters in British business history.”

It turns out that you can actually push people too far, and that this new badges business is angering people who don’t much care about the LGBT movement but don’t appreciate having gender ideology rammed down their throats in every single area of recreation, entertainment, and business. The Scouts Association is doubling down on their badges telling kids that bisexuality and transgenderism are “fun” (whatever that means), but perhaps other businesses are watching Halifax and coming to the conclusion that if you push people hard enough, you might shove them right out the door of your establishment.