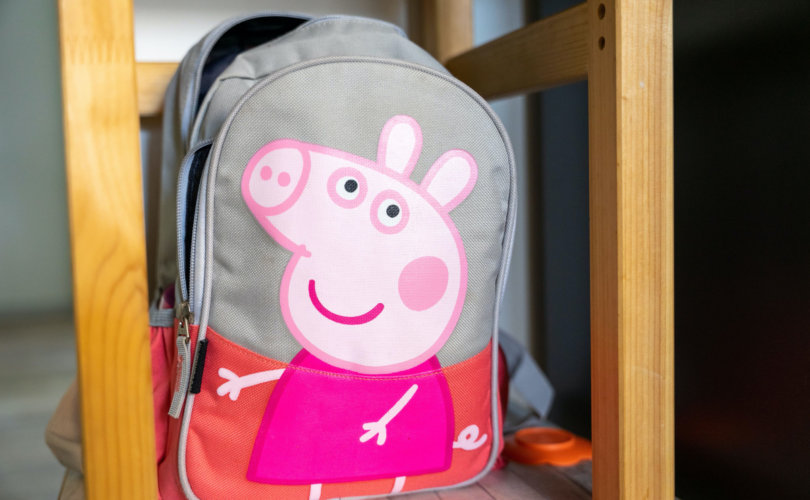 (LifeSiteNews) —“Peppa Pig” is a wildly popular children’s show about the adventures of a 4-year-old piglet and her family produced by Entertainment One. It has been translated into forty languages, broadcast in over 180 countries and territories, and has become a go-to for parents for its wholesome and innocent content—in fact, the show has been criticized for “enforcing gender stereotypes” because it features a stay-at-home mother and a father who works outside the home. The show has aired for almost twenty years and has accrued three British Academy of Film and Television Arts (BAFTA) awards.

It was thus inevitable that LGBT activists would insist on planting the rainbow flag in this cartoon world. A petition begun in 2019 called on the show to include same-sex parents; it eventually got just shy of 25,000 signatures over several years—a miniscule number considering what petitions on other issues regularly rack up, but from the perspective of the show’s creators, they were clearly the right signatures. To create a children’s show without gay characters is to be accused of exclusion and possibly bigotry. “Children watching Peppa Pig are at an impressionable age, and excluding same-sex families will teach them that only families with either a single parent or two parents of different sexes are normal,” the petition reads. “Peppa Pig is not just for entertainment, children are inevitably learning from it too.”

Consider that framing for a moment. LGBT activists understand that entertainment is about stories, and stories shape how we see the world. To have a children’s show that portrays a mother, father, and siblings as normal teaches them something. Thus, to include same-sex parents is to also teach them something. LGBT activists want all children’s entertainment to tell their stories because children are “at an impressionable age”—and thus they can win the hearts and minds of the young by “normalizing” the LGBT lifestyle from the earliest ages. In fact, LGBT activists understand what many parents mindlessly pushing screens in front of their children do not: that when they do so, they are allowing storytellers to tell stories to their children—and those stories will shape their moral imagination.

LGBT activists got their way when in a recent episode aired on the UK’s Channel 5 titled “Families,” Penny the Polar Bear tells the titular character Peppa Pig that she has “two mummies.” She then draws a photo of her holding hands with the two lesbian polar bears (what a stupid culture we have become). “I live with my mummy and my other mummy,” she says.

I have covered this subject in this space endlessly because most parents do not watch the children’s entertainment they stick in front of their kids—but most shows, even long-running stories with familiar characters, are now acquiescing to the demands of LGBT activists that they begin the process of normalizing the LGBT lifestyle. Many of these storytellers, of course, are on board with the agenda themselves, and were simply waiting for a cultural moment in which they could do so without much backlash from customers. Others cave to pressure. But one by one, they have all hoisted the rainbow flag: Disney, “Blue’s Clues”, most of Nickelodeon’s shows, Marc Brown’s “Arthur,” the reboot of the “Clifford the Big Red Dog” cartoon show, and many, many, more.

I’ve said it before, and no doubt I will say it again soon: Parents, what are your kids watching? Which storytellers are you entrusting the precious, formative hours of your children to? What view of the world are they getting from these storytellers? When you hand your children a screen to distract them, what—and who—are you distracting them with?

If you don’t know, find out.