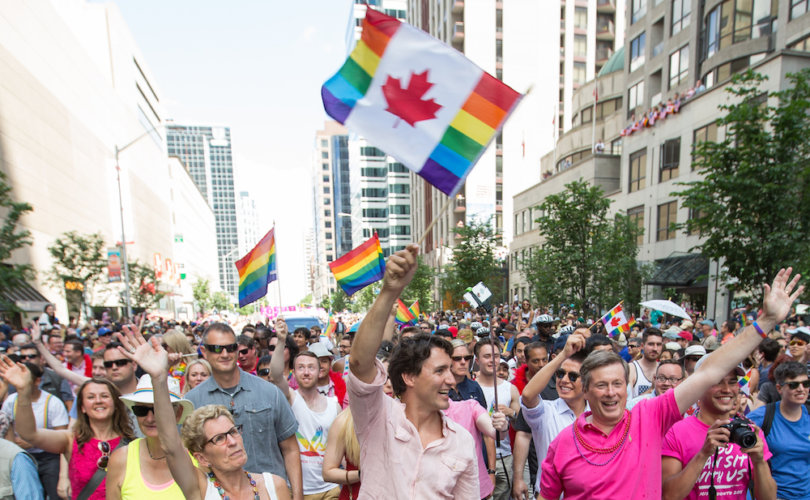 WOODSTOCK, Ontario, January 11, 2019 (LifeSiteNews) ― As a rule, Canadians are a tolerant, peaceable bunch, slow to stick our necks out. Nevertheless, more than 33,000 of us have signed a petition protesting the Canadian government’s nod to the Royal Canadian Mint to produce a one dollar coin, or “loonie,” commemorating the decriminalization of private homosexual acts in 1969.

Entitled “Say NO to a ‘Gay’ Loonie!”, the Citizen Go Canada petition underscores the irony in a Trudeau government celebrating private sexual acts on the nation’s coinage when another Trudeau said private sex acts were none of the government’s business. (Full text of petition below.)

“(Before) Prime Minister Pierre Elliott Trudeau decriminalized homosexual acts in 1969, he famously said, ‘there's no place for the state in the bedrooms of the nation,’” the petition to the Mint reads.

“In other words, people's private sexual practices should stay private, and the government should keep out. If that is the case, then why are you promoting certain sexual practices on Canada's official coinage?” it continues.

“It is like the government is opening up the doors of certain bedrooms and inviting everyone in to watch. This is unacceptable and un-Canadian.”

CitizenGo Canada reported over Facebook that its petition had received more than 20,000 signatures from people across the country during a single weekend. Its moderater stated also that it had attracted 12,000 signatories in its first 24 hours, a CitizenGo first.

“Over 12,000 signatures in 24 hours!” the administrator wrote. “I have never seen such a huge response so fast on any other petition. Thank you to everyone who has signed and shared this! Canadians are speaking up and saying NO to a ‘gay’ loonie.”

Bill C-150 is credited for “decriminalizing homosexuality” although simply identifying as homosexual was not illegal — indeed, in 1969 homosexuality was widely considered an unfortunate psychological condition — and it permitted homosexual acts only in private between adults over 21. The new legislation did not, for example, permit the public nudity and indecent acts that have featured at many Pride Day celebrations.

In 1969, Justice Minister John Turner likened the decriminalization of homosexual acts to the legal status of adultery. While the debate raged in Parliament, he told CBC Radio that Bill C-150 was not an endorsement of homosexuality.

“All it does is recognize what those of us who support the bill recognize: that there are areas of private behaviour which, however repugnant, however immoral — if they do not directly involve public order should not properly be within the criminal law of Canada,” Turner said.

“There are acts and situations in life which most of us would consider to be immoral that are not crimes,” he continued.

Turner also told the House of Commons that the Liberal Party was not claiming that homosexual acts were equal to “normal” acts of intercourse.

“We are not for a moment conceding that homosexual acts are in any way to be equated to ordinary, normal acts of intercourse,” he said.

Since then, Canadian politicians have abandoned an emphasis on the private nature of sexual acts to participate in their public celebration. Pierre Trudeau’s son, current Prime Minister Justin Trudeau, is an enthusiastic devotee of the nation’s annual Pride Day festivals.

Canadian coins should not promote division

I am very upset over the planned release of a pro-homosexual one dollar coin later this year. I do not want a “gay” loonie.

When Prime Minister Pierre Elliott Trudeau decriminalized homosexual acts in 1969, he famously said, “there's no place for the state in the bedrooms of the nation.” In other words, people's private sexual practices should stay private, and the government should keep out. If that is the case, then why are you promoting certain sexual practices on Canada's official coinage? It is like the government is opening up the doors of certain bedrooms and inviting everyone in to watch. This is unacceptable and un-Canadian.

The fact is that many religious Canadians consider homosexual acts to be sinful – a serious offence to God. Also, numerous non-religious Canadians feel homosexual acts are unnatural or unhealthy – at odds with normal human biological and reproductive functions. Many will feel uncomfortable using or carrying these coins. Some will believe they must reject them entirely. This is sure to widen the current rift in Canadian society and may promote discrimination against traditionally-minded people.

Therefore, I am asking you not to mint a “gay” loonie in 2019. The government must withdraw its plans for any design that celebrates homosexual acts. I do not want homosexuality forced upon me and my country.