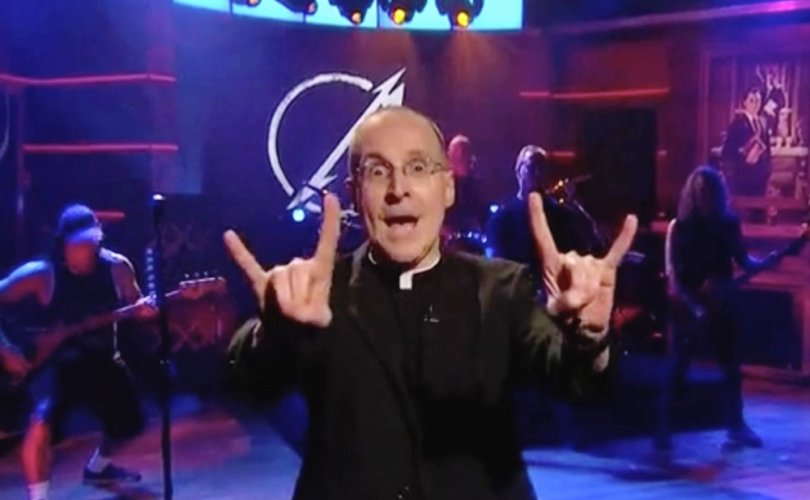 November 27, 2019 (LifeSiteNews) — A national discussion was triggered after a petition addressed to the U.S. papal nuncio was launched last week asking him to stop the appointment of Fr. James Martin, S.J. as archbishop of Philadelphia.

The petition was begun by Donna Bethell, a Catholic attorney and former U.S. Department of Energy undersecretary who recently stepped down as chairman of Christendom College’s board of directors.

The petition, which has gathered over 4,000 signatures in less than a week, states:

There is a credible report that Fr. James Martin, S.J., is being considered for appointment as Archbishop of Philadelphia. He would replace retiring Archbishop Charles Chaput, who recently found it necessary to warn that Fr. Martin should not be relied upon to accurately present Catholic doctrine on sexuality. Archbishop Chaput issued a statement detailing five points on which Fr. Martin clashes with Church teaching. For example, he says that Fr. Martin “inspires hope that the Church’s teachings on human sexuality can be changed.”

After Archbishop Chaput’s warning, other bishops also weighed in: Fr. Martin responded that he never contradicts Church teaching. That might be literally true, but Archbishop Chaput points out that that is not enough: “[T]he point is not to ‘not challenge’ what the Church believes about human sexuality, but to preach and teach it with confidence, joy, and zeal. Biblical truth liberates; it is never a cause for embarrassment.”

We need bishops who are clear and strong teachers of the whole of the Catholic Faith. There is a trend to appoint to major sees in the U.S. men who are supporters of the homosexual agenda, such as Cardinal Cupich in Chicago and Cardinal Tobin in Newark. Can anyone doubt that an Archbishop Martin in Philadelphia would follow their lead and very soon be given the red hat that was denied to Archbishop Chaput?

When pressed by LifeSiteNews to disclose the identity of the person who told her Martin was being vetted by the Vatican for the position of Philadelphia prelate, Bethell explained that he must remain anonymous because of his position.

“His source is Jesuits and what he heard is that Archbishop Pierre is seeking references for Fr. Martin for Archbishop of Philadelphia,” Bethell told LifeSiteNews. “As you know, this is a normal step in the development of candidates.”

“But the history of this pontificate is that normal processes are often short-circuited, so this appointment could occur at any time,” she added. “That is why I chose to go public now with what little I know. Once an appointment is made it is too late to stop it.”

“A year ago our group Catholic Laity and others, especially journalist George Neumayr, objected loudly to the appointment of Cardinal Tobin to Washington. We acted on no more than what we have here, an unconfirmed private report, yet within weeks Cardinal  Tobin told Mr. Neumayr he was staying in Newark,” recounted Bethell.

“Did we have an effect?” she wondered. “They will never admit it. But my job is not to worry about that. It is to do what I can when I can to defend the Church.”

“People are telling me that this couldn’t happen, he isn't even a bishop, he has no pastoral experience, he can’t go from just a priest to archbishop,” continued Bethell. “Really? The Pope just made a simple priest, Fr. Czerny, S.J., a Cardinal,” she pointed out. “Apparently it helps if you are a Jesuit. Oh, yeah, it's Fr. Martin, S.J. These people just enshrined an idol in St. Peter’s Basilica. We better wake up to the new rules.”

John Zmirak, Catholic author and senior editor of The Stream, has a different take on the matter.

“Someone probably leaked Martin’s name so we'd be a little RELIEVED when the Bolshevik McElroy got it instead,” tweeted Zmirak.

Someone probably leaked Martin's name so we'd be a little RELIEVED when the Bolshevik McElroy got it instead.

Here’s something else to think about: if McElroy or someone else succeeds Archbishop Chaput in Philadelphia, the Atlanta see is still open after Wilton Gregory’s departure to Washington, D.C. If Martin is destined to soon become a bishop, Atlanta is another plum place for him to land.

Ponder that: it’s possible that one morning, we could wake up to the news that we suddenly have Archbishop Robert McElroy in Philadelphia and a newly minted Archbishop James Martin, S.J. in Atlanta. Or vice versa.

Does the Vatican aim to stack the deck with pro-LGBT prelates in the U.S.?

Adding Martin as archbishop of Philadelphia or Atlanta would establish a powerful cabal to force the normalization of homosexuality and transgenderism within the Catholic Church in the United States.

Viganò said in his testimony:

Father James Martin, S.J. … appointed Consultor of the Secretariat for Communications, well-known activist who promotes the LGBT agenda, chosen to corrupt the young people who will soon gather in Dublin for the World Meeting of Families, is nothing but a sad recent example of that deviated wing of the Society of Jesus.

No wonder that Viganò’s testimony incited such vindictiveness from the three prelates: He spoke the truth about the pro-gay Fr. James Martin.

Perhaps the most significant tie that binds this trio — Cupich, Tobin, and McElroy — is that each owes his rise to dizzying heights in the Roman Catholic hierarchy to disgraced former cardinal McCarrick.

“The appointments of Blase Cupich to Chicago and Joseph W. Tobin to Newark were orchestrated by McCarrick,” noted Archbishop Viganò in his testimony.

“The appointment of McElroy in San Diego was also orchestrated from above,” said Viganò, “with an encrypted peremptory order to me as Nuncio, by Cardinal Parolin: ‘Reserve the See of San Diego for McElroy.’

Sign this petition and tell the papal nuncio, Archbishop Pierre, who is reported to be collecting references on Fr. Martin, that his appointment would be intolerable. Tell him we want worthy shepherds who will be leaders in teaching and practicing the fullness of Catholicism, not more men who will obfuscate and obscure and avoid the inconvenient truths.