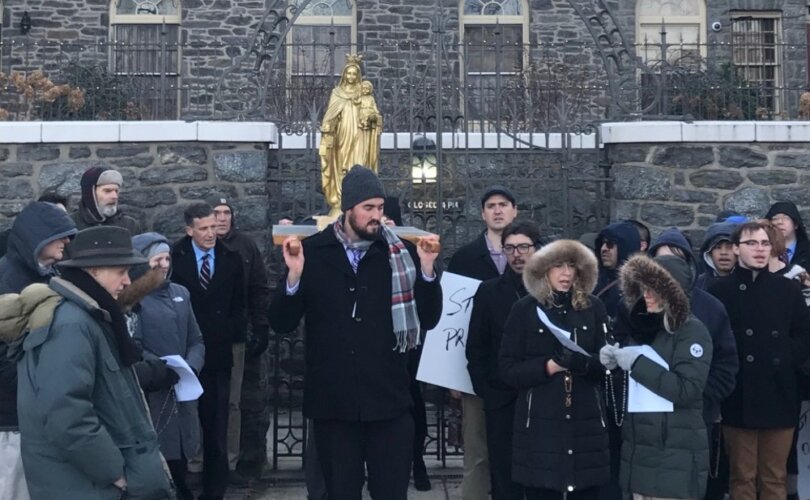 (LifeSiteNews) – Last Saturday, on December 18 at 3:00 p.m., several dozen lay Catholics assembled in front of their beloved Carmelite monastery in Philadelphia for a Rosary rally for the preservation of this Carmel full of historic significance. Their prayers and comments to LifeSite contributor Austin Peck (see video below) are an inspiration for all U.S. Catholics.

As LifeSite has amply reported, this Carmel was suppressed in February of this year with the active collaboration of the Vatican, the Vatican-aligned St. Joseph Association of Discalced Carmelite Monasteries in the U.S., as well as the Archdiocese of Philadelphia. This suppression came even though the last surviving nun of that Carmel had found other nuns to come and join her, and in spite of the fact that this Carmel is financially absolutely sound. As of now, the Vatican has tasked the St. Joseph Association with the financial and legal aspects of the closure of the monastery.

But this is not just any monastery. Austin Peck learned some crucial aspects of the history of this Carmel that are of interest to all Americans.

One participant of the December 18 rally, the great-niece of the archbishop of Philadelphia from 1918 until 1951, Cardinal Dennis Dougherty, revealed that it was Dougherty who first became aware of St. Therese of Lisieux’s autobiography “The Story of A Soul” and subsequently worked for her canonization.

“He came here,” she said, standing in front of the Carmel in Philadelphia, “and discovered The Story of A Soul because the Sisters gave him the book. He was going to make her a saint, and he did.” (Dougherty’s account of his visiting the four remaining natural sisters of St. Therese in Lisieux in 1913 – published in 1925 – can be read here.)

“I believe this is Ground Zero for St. Therese of Lisieux becoming a saint,” she concluded.

As the website of friends of the Carmel shows, it was one of the founding nuns of this Carmel who started devotion to St. Therese of Lisieux at the beginning of the 20th century in the United States:

Sister Stanislaus of the Blessed Sacrament (a Philadelphia girl named Helen Kelly), was the pioneer in establishing devotion to St. Therese in the United States. Sister Stanislaus, born in 1879 when Therese Martin was six years old, entered the Boston Carmel while Therese was still alive. There she received an early edition of ‘Story of A Soul’ in French. Deeply moved by it, she began to live the spirituality of ‘Sister Therese of the Child Jesus,’ and, when she came to Philadelphia, she was already a major figure in the American movement to beatify Sister Therese. Her assignment as portress gave her the opportunity to share Therese with many others. Until Sister Stanislaus died in 1911, aged only 31, she corresponded with Mother Agnes of Jesus, Therese’s sister Pauline.

The Catholic laity of Philadelphia are aware of this precious treasure and are indignant about its closure.

“We are not going to quit,” said one of the faithful, adding, “for the good of the world.”

“God protect our Carmel,” begged one of the signs displayed during the prayer rally.

“The Carmel is the heart of the Church… Our prayers today are to keep the heart beating,” one of the participants told Peck.

One lady, holding her hand on the door to the enclosed monastery, explained that “there is at least one saint, Sister Stanislaus, who is incorrupt. She is in the Mausoleum. She was known as the Little Flower of Philadelphia.” This is the same nun who brought the devotion to St. Therese of Lisieux into the United States and started sending out leaflets about this saint throughout the country.

Looking up the beautiful old door, this Catholic laywoman added: “There are treasures that no one can understand, except a Carmelite, or the faithful.”

May this rosary rally contribute to the discovery of this great treasure that the United States has in her midst, may the local saint – Sister Stanislaus – be discovered, and may the significance of Philadelphia with regard to St. Therese of Lisieux and her canonization be discovered. And finally, may the beautiful loyalty of the Philadelphia laity contribute to the rescue of this historic Carmel.

St. Therese of Lisieux, pray for us!