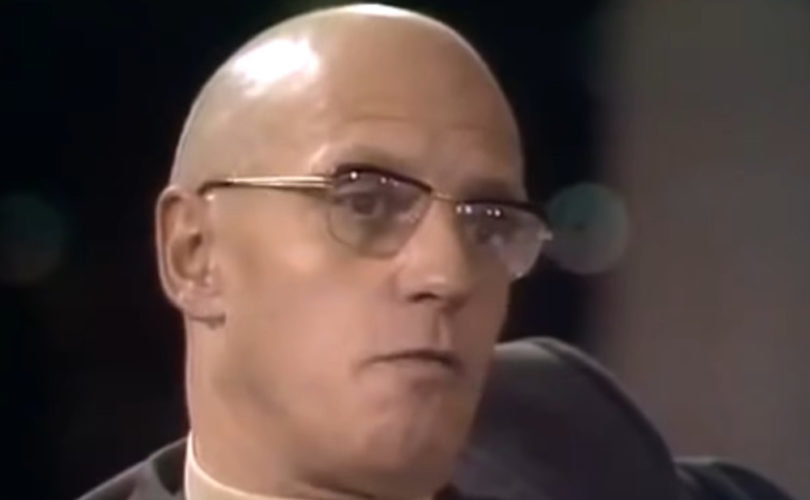 April 7, 2021 (LifeSiteNews) — Almost without exception, the architects of the Sexual Revolution have proven to be reckless hedonists and, in many cases, sex criminals who took their theories of pelvic liberation to horrifying but logical conclusions. It is long past time that we re-examined the history of our cultural transformation in light of these facts.

And it has been long known that Michel Foucault, the French celebrity intellectual and post-structuralist philosopher, was an unapologetic hedonist. A sadomasochist, Foucault was one of the first publicly “out” figures and died of AIDS in Paris in 1984.

Foucault is, unfortunately, one of the most influential philosophers of our era, the founder of “wokeness,” the father of critical race theory, and the man who lent academic credibility to progressive activists and politicians. His work was the inspiration for “queer theory,” as Foucault frequently argued that sexuality existed on a spectrum and that sexuality was socially constructed. Naturally, this meant there was nothing unnatural — or wrong — in the realm of sex.

In fact, in 1977 Foucault signed a petition calling for the legalization of sex with thirteen-year-old children. Thus, it should be no surprise that new evidence has been uncovered indicating that the French philosopher may have been a pedophile rapist. According to an article published by the Sunday Times on March 28:

The philosopher Michel Foucault, a beacon of today’s “woke” ideology, has become the latest prominent French figure to face a retrospective reckoning for sexually abusing children. A fellow intellectual, Guy Sorman, has unleashed a storm among Parisian “intellos” with his claim that Foucault, who died in 1984 aged 57, was a paedophile rapist who had sex with Arab children while living in Tunisia in the late 1960s.

Sorman, 77, said he had visited Foucault with a group of friends on an Easter holiday trip to the village of Sidi Bou Said, near Tunis, where the philosopher was living in 1969. “Young children were running after Foucault saying ‘what about me? take me, take me’,” he recalled last week in an interview with The Sunday Times.

“They were eight, nine, ten years old, he was throwing money at them and would say ‘let’s meet at 10pm at the usual place’.” This, it turned out, was the local cemetery: “He would make love there on the gravestones with young boys. The question of consent wasn’t even raised.”

Sorman claimed that “Foucault would not have dared to do it in France”, comparing him to Paul Gauguin, the impressionist said to have had sex with young girls he painted in Tahiti, and Andre Gide, the novelist who preyed on boys in Africa. “There is a colonial dimension to this. A white imperialism.”

Sorman says that French journalists on the trip, as well as other witnesses, had to have known about Foucault’s behavior, but that his god-like status bought him immunity — or at least, silence. Sorman called his own failure to report Foucault to the police “extremely morally ugly,” and these allegations — first laid out in his new book My Dictionary of Bullshit — come at a time when many elite figures have been facing accusations of sexual misconduct and child abuse.

Academics are already admitting that these revelations might have a serious impact on Foucault’s legacy.

These allegations, coming as they do amid so many other exposés, have promoted something of a reckoning. The Sunday Times notes that Luc Ferr, “a philosopher and former education minister, argues that his contemporaries have much to answer for. ‘People had forgotten that 1968 thinking promoted paedophilia,’ he wrote in Le Figaro. ‘Every adult had the right[,] even the duty, they argued, to awaken the sexuality that the bourgeoisie was hiding.’”

He notes that there has been a re-examination of the sexual attitudes spawned by the Sixties and the horror with which we now regard the child abuse perpetrated by some elite figures. Pedophilia was openly advocated not just by a few despised activists, but by a number of cultural icons. Could the current reconsideration of these figures and their actions, Hitchens wonders, be a hairline crack in the Sexual Revolution’s gleaming façade?

Maybe. At the very least, we now know who Foucault really was — and where his ideas led him. We should take great care not to follow him.