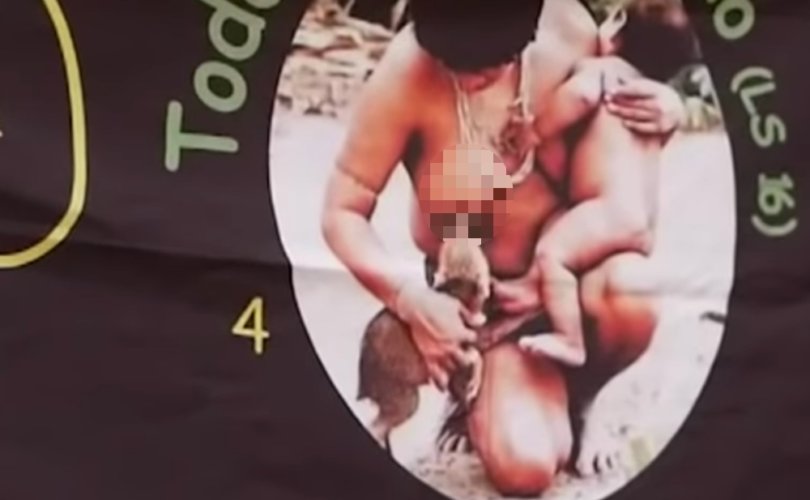 This was the wrong day to wake up late and miss early morning Mass.

Instead of my usual dawn walk to the Traditional Latin Mass, I headed to St. Peter’s Square. Even at 7:30 a.m. traffic was insane, partly because scores of pilgrims, some dressed in wedding finery, were queuing up for Pope Francis’ weekly Wednesday audience. Then, when I took a circuitous route to the Via della Conciliazione, I spied Santa Maria in Traspontina across the road and decided to have a look at the Amazonian Spirituality exhibit.

Two or three women were coming out of the church as I went in, and I was hopeful that I wasn’t interrupting a service. A handful of people were still scattered about the church, however, for what appeared to be the Rosary in Italian.

The Amazonian exhibit took up a couple of side altars to my right, and although there were a pair of the famous wooden naked women with pregnant red bellies, I didn’t see the poster of the woman breastfeeding an animal at first. What caught my attention was a poster of Sister Dorothy Stang, S.N.D., a missionary and environmentalist who served the poor in Brazil for almost 40 years. A staunch opponent of the deforestation of the Amazon, she was murdered by two gunmen who worked for cattle ranchers.

There were other posters of missionaries who had worked and died in the Amazon, and I revised my opinion of the politicization of saints. If a Christian missionary is receiving death threats and yet stays with her people out of love for Christ Jesus, then―by the current standards―yes, she is a martyr. I’m open to argument on this one, for I realize the topic of who is a martyr and who is simply a murder victim is a difficult one, unsolvable in a single paragraph.

But thoughts of missionaries and martyrs were driven from my head by the sight of the photographs of the woman “breastfeeding a weasel.” By now I was at a distance, so either I hadn’t looked at the right place or the religious sisters fiddling with the poster had just put it up on the wall between the chapels.

The religious sisters were wearing habits―short veils, knee-length skirts―and were elderly, and somehow their presence made the monstrous poster worse. Call me old-fashioned, but surely the Brides of Christ should not sully their eyes with such a thing, let alone ensure it is securely fastened to the wall. If you’ve seen photographs of the poster, let me assure you that it is much worse to see it live in person in the church beside nuns.

I have been trying to get my mind around how any Christian, let alone a Western Christian in a church, could not be offended by the image of a woman ignoring her own child while looking down fondly on a rodent she is breastfeeding. Whatever the intent of the photographer or the poster’s compositor, it looks like a diabolical mockery of the Madonna and Child. It also dehumanizes the woman in the photograph and, by extension, indigenous women and, indeed, all women.

Photographs make bigger impacts than words, and thus these unthinkable photographs (plural because there is a close-up of the human nipple in the beastly mouth) do a terrible disservice to the clothed, articulate indigenous women who so badly want the world to pay attention to their words.

There was such an articulate indigenous woman at yesterday’s press conference. Yesica Patiachi Tayori is a representative of the Harakmbut people who live in the Madre de Dios (literally: Mother of God) region in Peru, near the Brazilian border. Patiachi is a bilingual teacher and a member of the Apostolic Vicariate of Puerto Maldonado’s Indigenous Pastoral Care team.

Patiachi said that she had presented the concerns of indigenous people to Pope Francis, and that she hoped the synod did not end in empty words. She said the indigenous feared that they were being put on show―and, believe me, your humble LifeSiteNews correspondent fears that, too.

The middle-aged woman said that the mining companies want indigenous people to disappear, but that the indigenous people want the world to know that they want to be allowed to live. She added that they have heard warnings from the outside about climate change, but that their mothers and grandmothers have been worrying about it for a long time. Patiachi stated that the indigenous people don’t have a stage on which to present threats to their lives, their ways of life, and their food supply, among other things. She hopes the synod will “awaken the human conscience.”

Of the bishops, Welllington de Queiroz Vieira gave the most newsworthy opinion, saying that he did not think that celibacy was the principal problem in attracting vocations to the priesthood. De Queiroz identified the bar as a “lack of holiness” and said that because of this “we are unable to convey the real message of Christ.”

Acknowledging the often-repeated phrase “new paths,” De Queiroz said he didn’t think they could go beyond “holiness and conversion.” He also asserted that Jesus Christ has not lost His power to attract, and that one of the problems in reaching remote communities is that there is an unequal distribution of priests. Apparently many priests lack a missionary spirit.

Question time was very exciting, for my LifeSiteNews colleague Diane Montagna attempted, in fluent Italian, to find out who or what exactly the wooden pregnant lady carvings represent. At first Christiane Murray, the moderator, said that they didn’t understand the question, and Diane got the microphone again.

When the Vatican communications team responded, they said it represented “life” and “an indigenous woman who brings life” and “just a female figure” and “nobody said it was the Virgin Mary”―which last was very shocking, for various defenders of the wooden image have indeed said it was and apparently the woman who presented a copy to Pope Francis called it “Our Lady of the Amazon.”

Even more shocking, of course, is that a mixed group of indigenous people and people of European descent, including a male religious, prostrated themselves before two copies of the figure in the Vatican Gardens earlier this month, in front of Pope Francis. And to give Pope Francis credit, he abandoned his speech, prayed the Lord’s Prayer, and cut out early. So there’s that.

The next question was for Yesica Patiachi Tayori about the importance of the missionary church for her people, and she responded by relating the tragic story of the Harakmbut people, who once numbered 50,000. (They now number 5,000.) They were used by the rubber industry as cheap labor, and 10,000 of them were killed in a massacre. The corpses were thrown in the Madre de Dios river, which the Harakmbut relied on for drinking water, so many of them died from the contamination.

Patiachi credited a Dominican missionary, Fr. José Álvarez, who arrived in Madre de Dios in 1917, for helping her people against the rubber industry. They called him Apaktone (“Elderly Father”), and Patiachi said that if it were not for him, she would not be here today.

There were also the usual questions about the role of women, and women’s ministries, and synod votes for women, but nobody came straight out to say, “Women deacons–Si!”, so the most exciting English-language story of the day was about the mysterious wooden figure, now widely called “Pachamama” for short.

I went home to write, and for the first time, I felt miserable and heartily sick of Rome. I thought what Yesica Patiachi Tayori had to say was very important, but that the Madre de Dios river of her testimony was being contaminated by offensive displays of syncretism.

Among the people dancing around Pachamama in Rome is a grey-haired woman in unflattering clerical shirts and Roman collars. Apparently she is an Anglican minister. Well, presumably she means well, but such eye-catching displays by European Protestants distract from the very real concerns of the indigenous people.

My mood improved when, hours later, my husband and I took a taxi cab to the Scots College, and a kind Scottish seminarian led us to the chapel for Vespers and Mass. Neither Vespers nor Mass were particularly inculturated unless you count the use of Standard English as inculturation. Also, one of the priests who celebrated Mass was from India, and the sister who read the readings was from Africa, so this was more of an international celebration. This reminded me of Evelyn Waugh’s fantasy story of African priests re-evangelizing a Britain that had reverted to the Iron Age.

But the gin-and-tonic I was handed afterwards was definitely inculturated. If not strictly Scottish, it was quite definitely British. It also cheered me up entirely, so hooray for liquid inculturation.