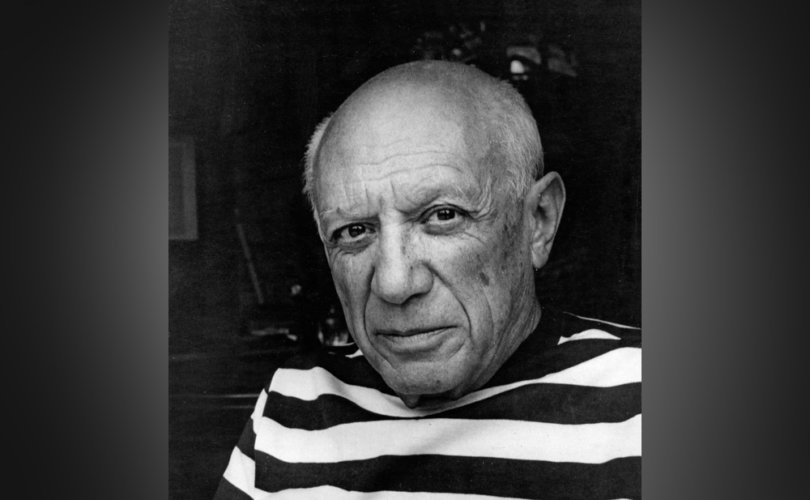 June 27, 2018 (LifeSiteNews) – The Tate Gallery label for Pablo Picasso’s 1905 portrait Girl in a Chemise paints a dreadful picture. “This waif-like girl is among Picasso’s cast of people from the margins of society,” it read. “A melancholic mood is conveyed with veils of paint…Her delicate pink flesh evokes the skin-colour that Picasso’s friend Guillaume Apollinaire identified among street performers: ‘that purplish pink one finds on the cheeks of certain fresh girls close to death.’” But the painting, considered by art experts to mark the end of Picasso’s Blue Period, actually tells an even darker story.

Picasso is an important cultural figure because he is widely considered to be one of the most influential artists of the last century, with his boundary-smashing work that led him from traditional painting to Cubism and Surrealism. Much of his work trended towards the pornographic—he once claimed that sex and art were virtually the same thing–and Picasso’s vicious appetite for women was legendary. He was a sadist, and inflicting pain on women—“fresh girls close to death”—was Picasso’s pattern with his multiple wives, his mistresses, and women he was painting. He treated them like objects for painting and for pleasure—he beat one woman so badly she fell unconscious, and held a burning candle to the face of another.

Picasso promiscuously pursued women and brutally discarded them with such frequency that there are mysterious women who appear in his work that we know virtually nothing about. One of these women is Madeleine—historians are clueless as to her last name—whom Picasso immortalized in his Madeleine, Summer 1904 and several other works. She is also probably the melancholic, deathly-pink girl in Girl in a Chemise—and as Picasso admitted years later when the painting surfaced again, she’d just had an abortion. She hadn’t wanted to—Picasso had to pressure her into disposing of the child they’d created together. Decades later in 1968, long after Madeleine had vanished soundlessly into history, never to be heard from again, Picasso joked about it. “Can you imagine me having a son 64-years-old?” he chuckled.

He must have imagined it at some point. Right about the time Madeleine would have given birth—even though Picasso had at that point abandoned her for another model—he began to create mother-and-child images, which many speculate are evidence that the dead child he’d never met still lingered in his consciousness. We don’t know how Madeleine felt about Picasso’s push to abort their child, or whether she grieved afterwards, when she found herself alone with betrayal and painful memories. We don’t even know if Madeleine ever saw Picasso’s painting Maternity, which arrived about the time their child would have, showing baby tightly clutching his mother.

Abortion has often been used by artists and writers to extinguish any competition for their time and responsibilities, and the absences of the missing children often scar the work of those who forced them to the exit. Their presence can at times be felt on the peripheries of work that they were killed to make room for, a testament to the sacrifices men and women are willing to make for their ambitions. Picasso, a monumental cultural influence who radicalized the art world and became a legend in his own time, was one such man. His violence against women gave way to violence against at least one of his own children, who vanished shortly before his mother did.

There is a strange post-script to the Picasso abortion story. In 1998, a crowd of feminists and abortion activists gathered at a Beverly Hills gallery to celebrate the 25th anniversary of Roe v. Wade, the Supreme Court case that legalized abortion in all fifty states. The gallery was also displaying a 35-painting survey of Picasso hosted by film producer and art dealer Arne Glimcher, who was sharing a few laughs with Gloria Steinem, a founding feminist and leader at the time of the largest abortion political action committee in the country, Voters for Choice. Picasso was perhaps an unsavory character at times, Steinem admitted when asked about the artist. But what, asked a journalist, would Picasso “have felt about supporting reproductive freedom as a basic human right?”

“Picasso cared about injustice,” Steinem told the audience that had gathered to celebrate abortion, “and I like to think now his sense of injustice would have included this cause. So we welcome Picasso this evening as a feminist to our fold.”

And just like that, the sadist, the woman-beater, and the post-abortive father who created his career on the backs of women he threw out when he was finished with them, was posthumously conscripted into the ranks of the feminist abortion warriors.