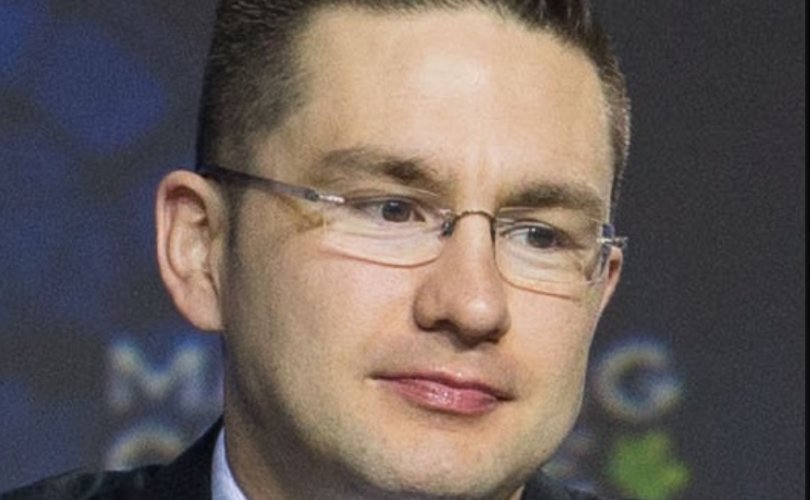 OTTAWA (LifeSiteNews) — As Pierre Poilievre throws his hat early into the ring to become Canada’s next Prime Minister, perhaps conservatives should refrain from getting too optimistic.

It is clear that the Freedom Convoy has shaken up political discourse in Canada over the past two weeks. As Alberta and Saskatchewan both signal an end to all COVID restrictions, and as Trudeau’s health czar Theresa Tam suggests the government “re-examine” extreme measures such as COVID passports, the most notable effect has been the federal Conservative Party of Canada (CPC) expressing their complete reversal on their allegiance to the COVID regime by booting out their leader and becoming outspoken for freedom overnight.

As the Conservatives either stayed silent or supported the COVID dictatorship for two years, one can’t help but rejoice that the CPC seems to be shifting away from Trudeau-lite medical tyranny to Trump-inspired populism. However, one also feels some hard-headed trepidation.

Leading the charge for the CPC is Member of Parliament Pierre Poilievre, who made headlines when he voiced support for the Freedom Convoy protestors while slamming the mainstream media over their blatant left-wing bias.

Since then, the CPC has booted O’Toole as leader, appointed deputy leader Candice Bergen as interim leader, and apparently adopted the mission of the Freedom Convoy itself by continually bashing Trudeau for the imposition of the medical apartheid they themselves allowed for the past two years.

Surfing the waves of the massive pro-freedom movement sweeping the nation, Poilievre has now announced his desire to become the Conservatives’ next leader and oust Justin ‘Blackface’ Trudeau from his now-rarely occupied Ottawa office once and for all.

But is Poilievre conservative? Is a Poilievre-led government going to finally put the country back on track? Has the O’Toole era of the CPC genuinely been laid to rest, or would Poilievre just make it his job to keep it on life support until the shattered public trust is slowly rebuilt?

First, credit where credit is due. I think it is clear that Poilievre is far better than the now-ousted leader Erin O’Toole. While the media and the Liberals have accused the peaceful demonstrators in Ottawa and around the country of being racists, Nazis, insurrectionists, and even pawns of Russian agitators, Poilievre has stuck his neck out for ordinary Canadians.

He has stood up for the truckers and their allies, mentioned that the coverage of the protests by the mainstream is obviously slanted and potentially libelous, and even advocated for the goals of the protesters by announcing his desire for a complete eradication of all so-called COVID restrictions in the country.

So, what am I complaining about? Supporting Poilievre sounds like a no-brainer! A relatively young, articulate Albertan who has displayed courage amid some of the most intense establishment-funded, Great Reset-pushing, radical left-wing political attacks in the history of Canadian democracy, he’s a godsend in our crumbling nation!

This is where I remain skeptical, and I think with good reason.

As the Conservative Party is forced to abandon the attempted liberalization of Canadian conservatism and adopt a more populist-oriented and genuinely right-wing platform, Poilievre is not the social conservative Canada needs.

Poilievre is pro-abortion and decidedly pro-LGBT. In fact, Poilievre voted in favor of the so-called “conversion therapy bill” that political commentators and lawyers say has essentially criminalized parents teaching their own children the Bible’s view on sexuality.

The “conversion therapy” bill doesn’t just ban what is normally thought of when the term conversion therapy is used, such as egregious and archaic methods like “shock therapy,” but it outright criminalizes any attempt to counsel or aid people with same-sex attraction and/or gender dysphoria, even if the person wants to have their desires diminished, and even if that person is your own child.

Under Poilievre, will your kids have to wear masks at school? Unlikely. But will your children be taught simple biological truths like men cannot get pregnant? Also unlikely.

Conservatism ought to be coherent. It ought not display blatant contradictions. It ought to reject all propaganda in favor of perennial truths. Conservatism that picks and chooses which social poison to reject, and which to adopt, will lead us back to O’Toole, not away from him.

Abortion may be the best example of this. Poilievre voted against the pro-life bill that sought to ban the blatantly evil practice of sex-selective abortion. On one hand, Poilievre seems to stand up for each Canadian’s fundamental right to life, liberty, and security of the person, but on the other hand he thinks that this right kicks in only once a child is born.

Some may be thinking, “But right now we need to focus on COVID; we can sort out the rest later!”  or “We will never get a perfect leader; this is not the time to be puritanical!” While there may be some truth to this line of reasoning—at least in the sense that we will never find the perfect leader outside of Christ—I think the nearly 100,000 children killed in utero each year may feel differently.

We all want a free Canada, but we should want a free Canada for all Canadians, born or unborn. While an immediate end to the COVID regime is needed, we must ask ourselves: Does a country that denies the right to life, liberty, and security of the person to its most innocent deserve it in any capacity for anyone at all?