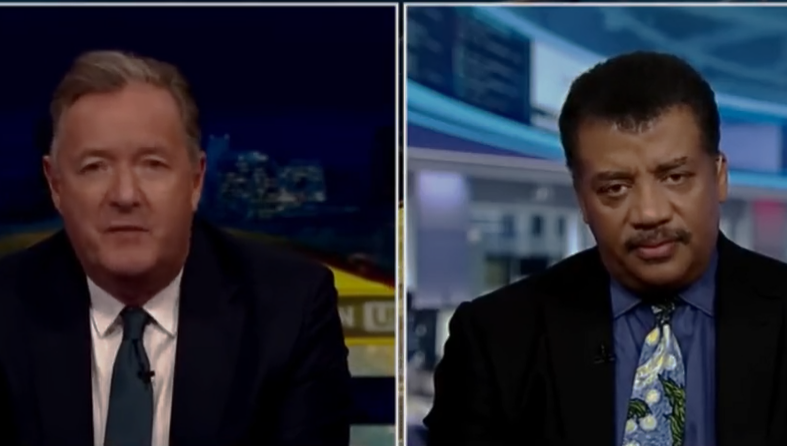 (LifeSiteNews) – Longtime British television host Piers Morgan publicly backtracked on his COVID jab zealotry and told American astrophysicist Neil DeGrasse Tyson that he did so because “facts change” and he was just trying to be “logical.”

You didn’t just have an “opinion”.

Your abhorrent campaign against people who realised the lies a year ago will never be forgiven.

The comments were made as part of a long-form discussion he had with Tyson on his show “Piers Morgan Uncensored.”

Now, before I blast Morgan for his manic inconsistency and hypocrisy surrounding his COVID jab stance, I will say that in fairness to him he does host a variety of guests on his shows, always has, and lets them speak. As insufferable as some of his opinions and temper tantrums can be, he does a better job of allowing alternative voices to share their views than most mainstream television hosts.

He claimed to Tyson that he took such a hardline stance on the idea that everyone should get jabbed previously because the narrative supported the idea that they stopped transmission.

“When it was believed when the vaccines first came along that they would stop transmission, it seemed to me if you refused to be vaccinated you shouldn’t be entitled to the same rights … as those who’ve taken the vaccine and were therefore not able to transmit it … ”

Before we assess his statements about him changing his mind – and bravo to anyone who can admit they were wrong – it must be admitted that there is no basis for believe that the vaccines were the only sure way to stop transmission … even if there was evidence that they did, which we know definitively that there is not.

For the sake of argument, let us grant Morgan the idea that the jabs were effective in stopping transmission. Even if that were the case, it is a long-established truth that natural immunity offers protection not just for the individual but against transmission. It is the scientific orthodoxy of the past century that many traditional vaccines also offer a certain type of immunity and stoppage of transmission, debate about vaccines notwithstanding.

Now, it is also the case that are different types of vaccines, such as therapeutic and prophylactic, which is to say vaccines that offer a medicinal value after some illness has developed and those that introduce pathogens or elements of an illness into a body so that the body can build a response.

There is no guarantee that a vaccine like a flu jab will stop you from getting sick or spreading a virus, and it is only ever alleged that it stops you from getting seriously ill. Not becoming seriously ill can help to curb transmission as we pass illness either when we are highly symptomatic or coughing all over the place. But it is simply not the case that vaccines exist for respiratory viruses that reduce symptoms in a prophylactic sense and also offer sterilizing immunity so that we can neither contract nor transmit.

This is medical fantasy, and Piers Morgan was in fantasy land for ever believing it.

The logic of illogicality

It was Morgan’s contention in his discourse with Tyson that he simply changed his mind when “facts changed” because it was “logical” to do so. His argument being that if the “science” says one thing we follow it and then if it says another, we change our minds.

Again, fair enough to someone who changes their mind, but the science about vaccines never supported Morgan’s previous jab zealotry. In addition, it is not as if he was a moderate on the issue and simply preferred that others were vaccinated because he thought it was a good idea. Not even close. He was a pro-jab nut-job on social media making ludicrous claims.

At one point, he said that “footballers who refuse to be jabbed should be refused treatment for injuries.” Goodness, the disdain you must have in your heart for another human being to believe they should walk around with a limp due to a torn ACL for the rest of their life because they didn’t want to receive a medicine that made them uncomfortable. What level of hatred that is, I cannot understand.

Footballers who refuse to be jabbed should be refused treatment for injuries. After all, why should they trust doctors about treatment for broken legs & torn ligaments if they don’t trust them about a life-saving vaccine?

Why? Footballers get jabbed with stuff all the time, why are they being so pathetic about Covid vaccines when so much is at stake? The really shocking thing is that UK footballers are massively less vaccinated against covid than their European counterparts. It’s insane. https://t.co/B7IjOBqq8A

What is truly pathetic is that he demonstrated such a juvenile understanding of basic immunology and virology that he castigated entire groups of people who ended up being right in the end.

Perhaps Morgan took a jab that made him immune to critical thinking when the pandemic was declared.