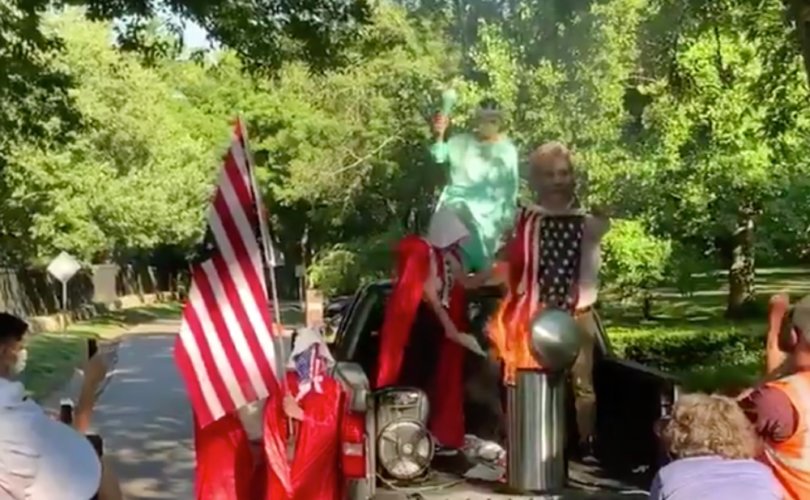 June 29, 2020 (LifeSiteNews) – These days it feels as if the Overton Window is moving at such warp speed that you can actually hear it sliding. State governments have placed their own citizens under house arrest, promptly made exceptions for riots and protests, and now statue-smashing has moved from Robert E. Lee to Ulysses S. Grant and from Jefferson Davis to Abraham Lincoln. America is getting a makeover, and those performing the surgery are wielding butcher knives rather than scalpels.

And now Planned Parenthood, which despite its racist roots has thus far survived the woke purges due to the fact that they provide much-needed abortions, is getting in on the action. Hitching their wagon to other progressive causes in order to secure a place on the woke platform has always been one of their primary strategies, but now, of course, a blood-glutted corporation that has caused more black deaths than any organization in America (the KKK included) is attempting to join the new revolution.

On June 25, for example, Tennessee Advocates for Planned Parenthood posted a video to Twitter of one of their protests. Governor Bill Lee recently signed a ban on abortion after the fetal heartbeat can be detected, and naturally abortion activists are outraged by this. Thus, presided over by a woman dressed up as the Statue of Liberty (but serving, in this context, as American Moloch) and attended by a handful of protestors, some featuring the red dress uniform of the Radical Handmaids, the abortion activists burned an upside-down American flag and lowered the burning Stars and Stripes into a trash can.

The activist doing the ceremonial flag-burning was dressed as Governor Lee. “Gov. Bill Lee has disrespected our constitution and practically lit the flag on fire by banning abortion,” Tennessee Advocates for Planned Parenthood tweeted. “But we won’t stop until we live in a new America that respects the rights of pregnant people. Full stop.” They added helpfully:

A quote from the skit for more context: “This is our constitution. I think it is garbage. This is nothing more than a just piece of paper to me, which is why I introduced the unconstitutional abortion ban in the first place.”

Abortion activists burning the U.S. Constitution is a bit on the nose, but the irony of it all appeared to be lost on the flag-burners. In the “new America” abortion activists are demanding, the right to be rid of your children reigns supreme, reducing the right to life to the arbitrary whim of the mother. These mothers, incidentally, make up Planned Parenthood’s clientele. Never in the history of the Left have so-called progressives been so utterly unsuspicious of an enormous corporation posing as a revolutionary ally. Not so very long ago, corporations were the enemy. Now, things have flipped as the corporations have become woke and begun to agitate for the abortion industry and frantically wave the rainbow flag in an effort to ingratiate themselves with the mob.

It is noteworthy that recent Planned Parenthood scandals have fizzled. You probably didn’t hear, for example, that 300 people signed an “Open Letter” calling for the removal of Laura McQuade, the president and CEO of Planned Parenthood of Greater New York. According to the Kansas Star, McQuade is being “accused by her current and former staff of abusive behavior, systemic racism and financial mismanagement.” The letter alleges that “in her two-and-a-half year tenure, McQuade has created a culture of fear and intimidation; we have witnessed her cull dissenters and surround herself with enablers.” The letter went on to accuse her of “abusive behavior.” Others had accused her of racial discrimination. According to Jezebel:

On Tuesday, the board of Planned Parenthood Greater New York announced that they had “parted ways” with McQuade, news that came after a largely internal staff organizing effort spilled out into the public. Staff concerns against McQuade included accusations of racism and bullying, as well as charges that she had instituted a revenue-driven, assembly-line approach to PPGNY clinics–one that put patients, and in particular Black and other patients of color, at potential risk.

Interestingly, many employees and activists noted that this sort of behavior often doesn’t get reported—or gets ignored or hushed up—simply because nobody wants to hurt abortion “rights.” Abortion is the progressive sacrament, abortion must be protected, and if that means dealing with toxic racists and awful work conditions, so be it. It must be done. For abortion.

Progressives may be pushing for a second American revolution, but their primary loyalty is to the sexual revolution. And for the sexual revolution to be possible, it is essential to have exterminators on hand to eliminate the babies that are naturally produced by the baby-making act. Planned Parenthood does that like nobody else, to the tune of several hundred thousand baby corpses per year. Their deal with the woke Left is sealed in blood.

For that, progressives will let them get away with murder.