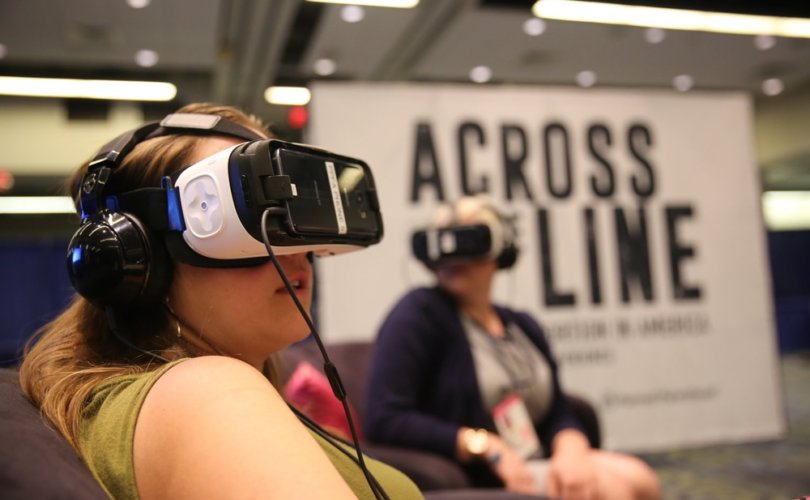 April 13, 2018 (LifeSiteNews) – The “progressive” magazine Fast Company has released a video interview in which Planned Parenthood executive Dawn Laguens explained how the self-styled “young people’s brand” was using new technology to advance “empathy building” in a variety of ways, particularly virtual reality. The propaganda pitch was certainly memorable, albeit for all the wrong reasons.

We produced a virtual reality film called “Across the Line” that gives people the opportunity to step into the shoes of a patient who’s trying to get through a crowd of protestors to get to their appointment. And it’s a really powerful experience, because it turns out, of course, you’ve been threatened with eternal damnation in the lake of fire and called, among the nicest things, a “wicked jezebel feminist” (but many other things), it really does increase your empathy for a person and your willingness to stand up for them to be able to access any care, but especially abortion.

Fostering empathy through visual aids? If that sounds familiar, it’s because that’s precisely why pro-lifers work to make abortionists offer ultrasound images to women before abortion. Strangely enough, though, Laguens’ “empathetic” organization almost never agrees to show women those images if they can help it, and bitterly opposes being legally required to do so.

Her compassion only gets less convincing after watching “Across the Line.” Its website says it uses a combination of “real audio gathered at protests, scripted scenes, and documentary footage,” which seem to suggest that the unidentified woman seeking the abortion is an actress, rather than a patient actually experiencing the trauma to which she attests.

It turns out that using real pro-lifers instead of carefully-crafted caricatures was their first strategic blunder. We see the “patient” and a friend driving to the abortion facility, past a crowd of pro-lifers chanting and holding signs. They stop and ask a man who approaches their car for directions to the right building.

The man turns out to be one of the sidewalk counselors, and he’s about as far from “threatening” as you can imagine.

He tells them it’s not a “healthcare clinic,” but rather a place that commits 20-30 abortions per day. He then tries to get her to change her mind, his tone firm yet gentle, his voice sounding like he’s on the verge of tears that can only be described as the epitome of real empathy:

Look, there’s a place, it’s very safe down the street…please let me take you there. Please, please. Look, I know you’re struggling with something, alright? But I don’t wanna see you get hurt. I’ve been doing this for eight years. I’ve been counseling out here for eight years, and I see women go in that are struggling with it just like you are, and they come out two hours later, and many of them are hurt and broken. I don’t know what your situation is, but there’s a more dignifying choice for you as a woman and as a mother.

The driver retorts that the the choice to have one’s baby killed is dignified, and…well, we don’t know how the man responded other than a muffled “we’re gonna pray for you,” because at this point the screen fades out.

“That is the worst thing I have to see right now,” the fake patient says over the black screen. Maybe they realized that a kindly older gentlemen’s impassioned appeal for her welfare wasn’t quite the horror they had hoped to capture, and added a feigned traumatized reaction in post.

Next the film transitions to a compilation of audio supposedly “recorded at protests across the United States.” It contains a variety of genuinely ugly things — “you’re a whore,” “maybe your parents should have aborted you,” “God’s gonna destroy you,” etc. — as well as a perfectly reasonable “doesn’t your child have rights?” and a variety of rather blunt religious condemnations that many sidewalk counseling groups advise against.

Funny thing, though…the audio isn’t accompanied by footage of any of these protests, but put into the mouths of virtual people, rendered in video game-esque graphics that would have looked mediocre a decade ago.

What was the context? Were pro-lifers even the ones saying any of it? We don’t know; the raw footage of these protests doesn’t appear anywhere on “Across the Line’s” website or Planned Parenthood’s YouTube page (unlike, say, Live Action’s investigations, many of which are released with unedited extended footage so their findings can be independently verified). So we have only Planned Parenthood’s word to take for it…and they would never lie to us, right?

The truth is that Dawn Laguens knows full well that pro-lifers demonstrate our empathy for women every day, from supporting abortion alternatives to exposing all the ways her business preys upon them. Her entire empathy thesis is nothing more than a cheap marketing ploy, meant to divert attention from her complete lack of empathy for abortion’s preborn victims.