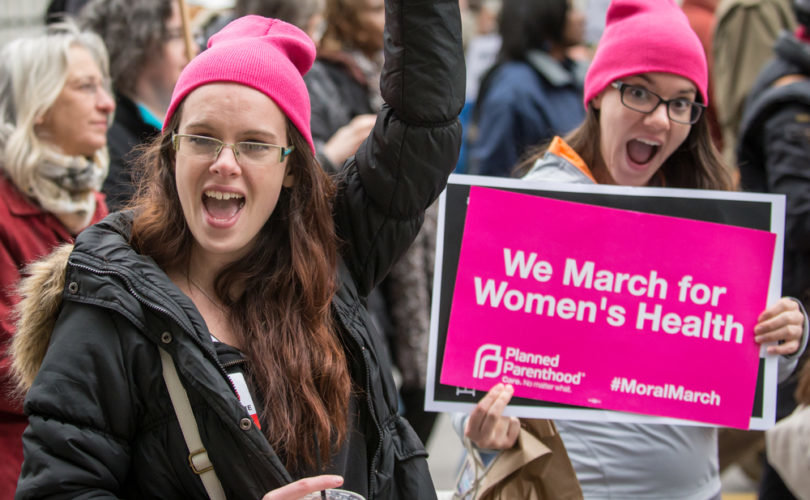 September 30, 2015 (LifeSiteNews) — Planned Parenthood loves to celebrate its dishonest self. With nearly 100 years of public deception and pseudoscientific propaganda under its bloody belt, what’s another nationwide ad campaign to distort its billion-dollar abortion empire?

“Pink Out Day is our time to say: Listen to over a million Americans who are sick and tired of the relentless attacks on reproductive health care.” By million, they mean a few thousand who know as much about Planned Parenthood as Bill Nye the Tired Pro-Abortion “Science” Guy. Taken down from their IStandWithPP.com main menu is the EVENTS page. Perhaps it was too embarrassing to only have 25 alleged “support” locations listed. They could only get so many paid activists, uhhh, “supporters” to show up at their pinked-out rallies. In contrast, the pro-life ProtestPP.com initiative brought out over 78,000 Americans to over 340 locations across the country in August to protest the nation’s largest abortion and baby-parts-trafficking chain. (Join #ProtestPP again on October 10, 2015!)

In Congressional hearings, two themes have repeatedly formed Democrat leaders’ inexplicable defense of Planned Parenthood, in light of the Center For Medical Progress videos’ exposure of the taxpayer-funded organization’s barbaric practices: the low-income and rape defenses.

Anyone who has studied Planned Parenthood understands why they target the poor. Their founder Margaret Sanger was an anti-human eugenicist who described birth control, in her book Women And The New Race, as “nothing more or less than the facilitation of the process of weeding out the unfit, of preventing the birth of defective or of those who will become defective.” Sanger’s eugenic disdain for the poor was evident in all of her writings: “We who advocate Birth Control, lay all of our emphasis upon stopping no only the reproduction of the unfit but upon stopping all reproduction when there is not economic means of providing proper care…” The abortion giant’s DNA is not that of compassion but of cruelty—an ardent belief that all human life is not equal.

“The people most likely to experience reduced access to care would probably reside in areas without access to other health care clinics or medical practitioners who serve low-income populations. However, the extent to which Medicaid beneficiaries served by Planned Parenthood live in such areas is uncertain.” This is the statement by the Congressional Budget Office in its report on defunding Planned Parenthood. Despite this, the incessantly wrong CBO continues to arbitrarily project that up to 15 percent of

Planned Parenthood’s customers, if the abortion giant were defunded, would “lose access to care”. Let’s just keep in mind how accurate the CBO was on Obamacare.

Planned Parenthood claims to have 2.7 million “customers”. Of course, none of this can be verified. Considering the amount of Planned Parenthood’s documented Medicaid fraud and overbilling, how can anyone trust the abortion chain’s numbers? Independent audits from state health departments have found repeated fraud committed by Planned Parenthood in Medicaid overbilling that amounts to $130 million according to Alliance Defending Freedom’s 2015 report, Profit, No Matter What. And that’s just scratching the surface.

You can’t steal from the very fund that is meant to provide for the poor and claim you’re some kind of savior to the same people. Planned Parenthood is no savior. They’re predators, preying on fears and misinformation reinforced by mainstream media, clueless celebrities, and liberal public education. There are 13,540 clinics providing comprehensive medical healthcare and only 665 Planned Parenthood abortion/abortion referral centers. An alliance of pro-life, pro-family, pro-liberty organizations has launched GetYourCare.org to provide an easily searchable database that provides the locations of these low cost, high-quality healthcare facilities that provide services to low-income individuals and families.

THE FACTS ABOUT PLANNED PARENTHOOD

We don’t need Planned Parenthood. Despite Cecile Richards’ false claim, 1 in 5 women do not depend on Planned Parenthood for their healthcare. Even if every one of their 2.68 million clients were female, it would still amount to only 2.5% of women (or 1 in 40 women) ages 15-64 in America. Planned Parenthood can be defunded and replaced.

We know that the nation’s largest abortion chain depends on lies, tweets and repeats. These facts won’t be shouted out by their pink-adorned “supporters” or mainstream media mouthpieces. Those who truly believe in human rights won’t allow truth to face a blackout during a #PINKOUT day or any other Big Abortion Bash. Americans need to have the moral courage to #DefundPP. Don’t let a billion-dollar abortion empire fool you into thinking its primary color is pink. The colors that define Planned Parenthood are profit-driven green soaked in blood red.