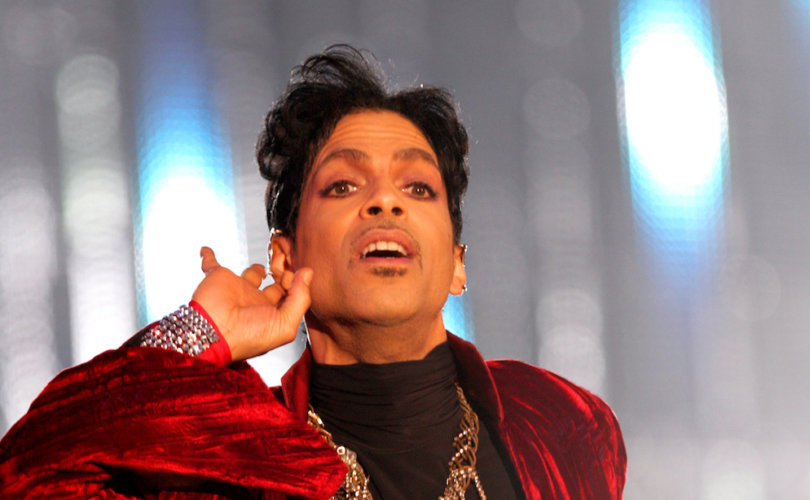 April 29, 2016 (LifeSiteNews) – Two things happen each time a significant pop culture figure dies: Christians attempt to dredge up some moderately conservative or traditional thing that figure said at some point during his long career, and mainstream media attempts to convince a society thoroughly bored with such things that the person in question was a ground-breaking radical. The two most recent examples are the androgynous David Bowie—a cringe-worthy and possibly blasphemous video of him dropping to his knees during a rock performance and uttering the Lord’s Prayer circulated just following his death–and the pop star Prince.

I’ve had to suppress my gag reflexes many times as I saw my Facebook newsfeed fill up with memes sporting quotes from Prince about his faith and articles announcing that the musician who “embraced gender fluidity before his time,” according to Slate and “will always be a gay icon” according to The Atlantic, was against gay marriage. Sure, maybe he was. But only a Christian community so shell-shocked by the rapid spread of the rainbow blitzkrieg and the catastrophic erosion of religious liberty would find this remarkable. After all, Barack Obama and Hillary Clinton said the same thing barely one election cycle ago. As one obituary celebrating Prince’s paradigm-smashing sexual performances written by Dodai Stewart put it:

Dig, if you will, a picture: The year is 1980. Many states still have sodomy laws. The radio is playing feel-good ear candy like Captain and Tennille and KC and the Sunshine Band. TV hits include the sunny, toothy blond shows Three’s Company and Happy Days. There’s no real word for “gender non-conforming.” But here’s what you see: A man. Clearly a man. Hairy, mostly naked body…a satiny bikini bottom. But those eyes. Rimmed in black, like a fantasy belly dancer. The full, pouty lips of a pin-up girl. Long hair. A tiny, svelte thing. Ethnically ambiguous, radiating lust. What is this? A man. Clearly a man. No. Not just a man. A Prince.

Right. So let’s not get too carried away, shall we? I know Christians are desperate to justify their addictions to the pop culture trash that did so much to sweep away Christian values in the first place and I know that latching on to the occasional stray conservative belief that may manifest itself in pop culture figures makes many feel as if perhaps we are not so weird and countercultural, but this bad habit we have of claiming these figures upon their passing is downright damaging.

After all, parents should be teaching their children about real heroes, titans of the faith who changed the world. Heroes of the early church who stood down tyrants, halted gladiatorial combat, and crusaded against injustice in a world where death was all the rage. These men and women were real rebels who stood for real values. If we want to point our children to people they should emulate, we should be handing them books like Seven Men: And the Secret of Their Greatness by the brilliant writer Eric Metaxas rather than the pop albums Purple Rain or Lovesexy by Prince. If parents spend their time glorifying the predecessors of Lady Gaga and Miley Cyrus instead of highlighting heroes like William Wilberforce, they can hardly be surprised when their children choose to emulate the former rather than the latter.

The mainstream media’s adulation of these pop stars is equally irritating. The unspoken truth of these obituaries is that the flamboyant antics of Prince and the rest of the so-called rebellious drag queens populating the rock n’ roll scene have been mainstream for a long time already. Want to see dozens of bizarre body piercings? Weird hairdos? Purple mohawks? Dudes with nail polish? Strange tattoos? Easy. Just go onto any university campus, or any public high school without a dress code. With headphones wedged firmly in their ear canals, they can pump the cleverly commercialized “counterculture” straight into their skulls 24 hours a day, 7 days a week.

More than that, some of these courageous rebels have actually sued their employers to ensure that they can let their establishment-smashing freak flag fly at work, too. An Edmonton woman with 22 visible body piercings complained that her employer was unfair because apparently she was being discriminated against “based on body modifications.” Yeah! The Man must be told, after all. And if he doesn’t agree, we will lawyer up. I wonder what the shrieking rebels of the early days would think about the snivelling children of the current grievance culture.

So these days, the media’s eulogizing about aging culture warriors who went mainstream a long time ago rings a bit hollow. After all, most rock n’ roll stars these days look tame compared to what shows up in the children’s section at Pride Week. Freaky is normal now. Normal is radical. Welcome to 2016.

When Christians are posting nostalgic tributes to the rebels who helped inoculate their children against the radical views of Christianity in the first place, you know that the victories of the counterculture are complete and Stockholm syndrome has set in.