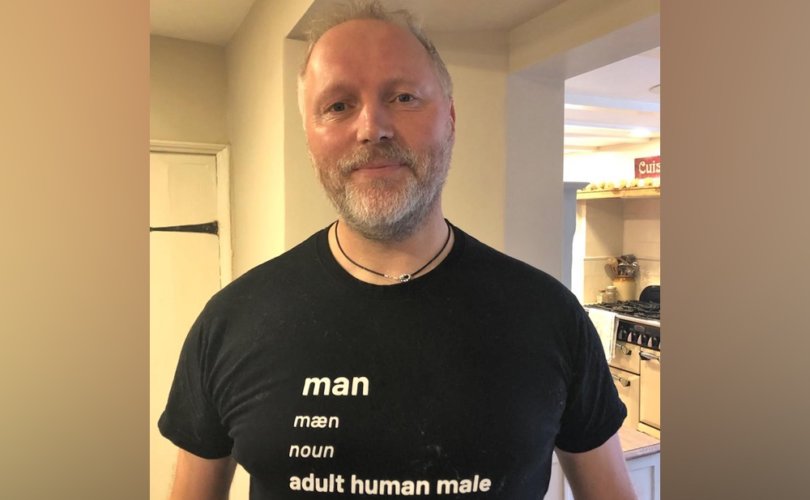 January 25, 2019 (LifeSiteNews) – In one of the strangest and most terrifying news items I’ve seen in recent years, a docker from Humberside in Northern England was informed by police that had become the subject of a formal investigation after he retweeted a limerick making fun of transgenderism which apparently included the (undeniably true) lines, “Your breasts are made of silicone, your vagina goes nowhere.”

This retweet, 53-year-old Harry Miller was told by a police officer, was a “hate incident” against the transgender community.

Miller, who describes himself as “just a hairy-a***ed docker who swears, drinks and watched football,” was contacted by a “community cohesion officer” this past Wednesday in response to a complaint about his Twitter activity. The officer noted that Miller had sent out at least thirty tweets that could be considered offensive, with the most egregious being the limerick tweet which accurately implied that transgender “women” are not, in fact, biological women. The officer, who told Miller that no crime been committed but that his social media activity was going to be recorded as a “hate incident,” even took it upon himself to explain to the machinery dealer that he had taken a course given by a transgender person and that “you can have a foetus with a female brain that grows male body parts and that’s what a transgender person is.”

Miller first realized police were hunting for him when his company’s bosses let him know that officers had shown up looking for him, as the anonymous complainant had apparently managed to figure out where Miller worked despite the fact that information about his employment or actual identity are not on his Twitter account. The complainant apparently also told the police that Miller’s workplace was an “unsafe environment” for transgender people due to Miller’s track record of tweets.

The police confirmed to the Telegraph that they had met with Miller, with the officer who initiated the meeting noting that, “Although none of the tweets were criminal, I said to Mr. Miller that the limerick is the kind of thing that upsets the transgender community. I warned him that if it escalates we will have to take further action.”

During the meeting, Miller demanded to know why the person who had complained about his tweets was being described by the officer as a “victim,” when his social media use constituted no crime. At that point, the officer informed him, in a chillingly Orwellian fashion that should send shivers down the spine of every free-thinking person, that he had come to see Miller because, “We need to check your thinking.”

The married father of four, in other words, was guilty of having the wrong thoughts—and even worse, expressing those thoughts publicly. The fact that his primary sin was to send a tweet that noted that transgender “women” are not biological women, which is a simple matter of fact, shows what a grotesque case of gaslighting this is.

It gets even worse. According to the Telegraph, crime in Humberside has been spiking: Violent crimes are up by 24%, robberies are up 17%, and the crime rate is well above the national average, resulting in nearly 200 extra cops being put on the beat in the past year. Despite that, the Humberside Police could still quite literally take the time to act as the thought police, sending an officer to an admittedly innocent man’s home to harass him about tweets that transgender people might not like. Their spokesperson responded sanctimoniously to media calls by stating that, “We take all reports of hate incidents seriously and will always investigate and take proportionate action.”

Getting a visit from the police for expressing unpopular biological facts, it turns out, is entirely “proportionate.” Social justice warriors are bad enough—social justice cops are downright scary.

Miller, for his part, was understandably stunned. Despite just being an average guy, he told the Telegraph, “I have a wife, a mother and daughters, and when it comes to their rights and safety and those of women everywhere, men need to speak up…I can’t believe what is happening in the UK in the name of transgenderism and, worse still, we’re not even allowed to think never mind talk about it.”

He’s not the only one, either. Miller says that he’s been getting messages nonstop from people who are actually “terrified” to speak out on the issue of transgenderism because they’re afraid of what the police might do. This isn’t surprising: Some critics of transgenderism have ended up in British courts for expressing their opinions, and a mother of two was arrested in December at the behest of a biological man identifying as a woman.

The police visit does not appear to have had the intended effect on Miller, who is furious. “The only way to protect freedom of speech is to keep bloody speaking,” he told the Telegraph. He’s now discussing the idea of doing a “limerick tour” of police headquarters with the woman (her Twitter handle is “Restless Ellie”) who wrote the offending poem, which is titled “You’re a man” and reads as follows:

Your breasts are made of silicone

And we can tell the difference

Even when you are not there

Your hormones are synthetic

And lets just cross this bridge

What you have you stupid man

We can say it, yes we can

That you’ll never be a woman

Even if that is your plan

Every cell is coded male

From your birth until the grave

You are simply a man

Neither stunning nor brave

Your wig is poorly made

Your idea of womanhood

You think we are just caricatures

You pretend that you can be us

Are difficult to hide

A hand in front of Adam’s fruit

Proof does not provide

That you have changed your actual sex

Because your brain is pink

It’s laughable to those of us

Who can actually think.

Miller, for his part, has already retweeted the poem again, changed his Twitter handle to “Harry the Owl—Limerick Criminal,” and is doing rounds of media interviews. In these insane times we live in, a docker can become an activist overnight because trans activists are willing to persecute anyone in their totalitarian attempts to stamp out any opposition to their nonsensical ideology—and truth itself.