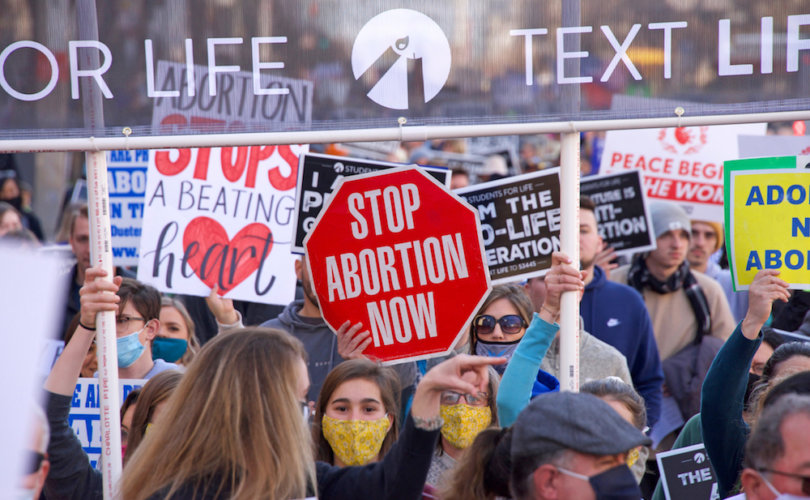 (LifeSiteNews) – Activism with the pro-life movement helped me understand the importance of using political power to reach a specific end, particularly abolishing abortion.

The first way is that it helped me realize that while free enterprise, small government, and limited regulations are good, they are only good as far as they assist in human flourishing.

Making it easier for people to start businesses, ensuring people can keep more of their money, and having high employment so people can provide for their families is good, and the market system does this better than Communism or socialism.

But I don’t worship free-markets and small government, I worship God. Prior experience in the pro-life movement, as a student and then working for Students for Life of America, helped me understand the importance of placing the pursuit of truth ahead of adherence to a particular political or economic philosophy.

Anyone who has done pro-life activism will likely hear this objection from liberals or “pro-choice” Republicans: “I thought conservatives were for small government and limited regulations. Yet they want to shut down abortion facilities and put regulations on abortion?”

Yes! I guess the pro-life movement is not going to win an award from a libertarian think-tank any time soon, but maybe we can stop babies from getting slaughtered in the womb. That’s more important.

The same logic applies to using political power to fight immoral activities, such as prostitution, pornography, and the chemical and genital mutilation promoted by gender ideology.

That appears to be missing from the libertarian right and many Republicans. For example, writing about the Texas Heartbeat Act, Reason magazine’s Jacob Sullum wrote that the law “violates conservative principles” by making it easier to sue abortionists and those who are complicit in helping someone have an abortion.

If I have to choose between saving babies from being killed through abortion or being ideologically consistent in questioning the ease of filing private lawsuits, I’ll go with the former.

A pro-life strategist helped me understand this idea when I worked at Students for Life of America. I brought up my concerns about the pro-life strategy of requiring abortionists to provide information on fetal developments to pregnant women, with the worry that the abortion industry could force the same on pro-life doctors and pregnancy resource centers. “They already do that,” she explained.

The idea of a classically liberal republic in America is a myth. Democrats and leftists weren’t worried about respecting the Tenth Amendment with regard to contraception, abortion, marriage, or any number of other issues.

Even as much as libertarians may try to knock pro-life conservatives, many of them cheered the Supreme Court overriding the will of voters who had passed laws protecting Biblical marriage. For example, Cato Institute filed an amicus brief in the Obergefell case urging five justices to tell voters in Ohio, Michigan, and Texas that the Tenth Amendment doesn’t apply to their views on marriage.

And Reason has been critical of Florida’s Parental Rights in Education bill, despite the law appearing to be incredibly libertarian, placing limits on what government employees can do.

The Christian conservative political movement should not pretend our opponents are playing on the same field as us, respecting the democratic process and Constitutional norms.

The ends do not justify the means, but in the same way, the means do not justify the ends. Free markets and by extension, limited government, are not in themselves something to be worshipped. Something is not inherently good because it occurs in the absence of government regulation against it – drugs, pornography, prostitution, to give a few examples.

It’s more important that conservatives fight for the truth and against destructive ideologies like transgenderism, abortion, and pornography.

Conservatives should wield political power at every level where they can.

At a local level, it might mean refusing to allow access to pornography on computers at libraries and in public schools.

At a state level, it might mean pioneering legal strategies to reduce, and ideally, stop abortions in Texas. I don’t know, for example, that a particular federal ban on the creation of pornography could work, but there must be some ways Congress can limit its creation and spread. I’m open to all suggestions, and in the meantime, am supportive of efforts at other levels of government to stop it.

A new law in Virginia prohibits people from sending unsolicited nude images to someone, for example. It’s small, but it’s a start.

When it comes to abortion, we have no idea how the Supreme Court will rule in Dobbs or in future cases, but if we keep using political power and hammering away at the injustices against the natural law, eventually we will rack up victories.

And at least when we personally stand in front of our Creator, we can honestly say we did what we could, morally and within the law, to advance the truth and advance Christendom.

That’s worth more than any award for personally being the most doctrinaire free-market enthusiast.