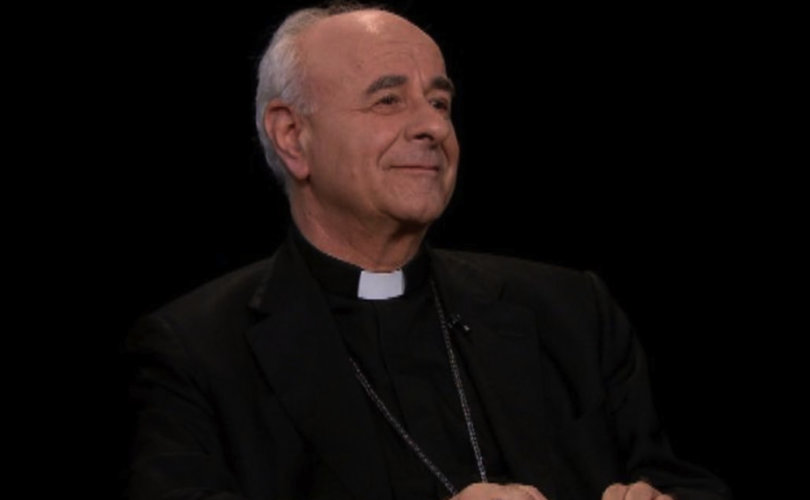 February 27, 2017 (LifeSiteNews) — Archbishop Vincenzo Paglia, head of the Pontifical Academy for Life – or what is left of it since Pope Francis removed every single member in December – joined a “debate” earlier this month to mark the publication of a biography on recently deceased Italian Radical Party founder Marco Pannella.

A debate normally requires at least some differences of opinion or conflicting views on the subject under discussion. But during his 20-minute speech (available here), Paglia expressed unqualified admiration for longtime friend Pannella, one of Italy’s most radical proponents of the culture of death.

What made matters even worse is that the event took place at the headquarters of the Italian Radical Party in Rome.

The Archbishop’s performance was highly reminiscent of Pope Francis’ own praise for Emma Bonino, another prominent and historic member of the Radical Party. She is one of the country’s “forgotten greats,” Francis said of Italy’s foremost promoter of abortion in February 2016.

Pannella, born in 1930, was the figurehead of the Radical Party that he founded in 1955, and also headed the Italian League for divorce, successfully using Leninist-style agitprop to make it legal in 1970.

Pannella took part in each and every endeavor of the culture of death – successful or not – such as the legalization of abortion, gay “marriage,” blasphemy, free love, transgender rights, and so on. He wanted to end the prohibition of exhibitionism and drug use and dreamed of emptying Italy’s prisons through a general amnesty. Pannella was a proponent of non-violence and socialism, nudism and the abolition of the Concordat between Italy and the Catholic Church. His Radical Party stood for all of that and more.

Pannella came out as a bisexual on Radio Radicale in 2010, admitting that he had “loved three or four men” while maintaining a lifelong unmarried relationship with girlfriend Mirella who, he said, “didn’t mind” his homosexual flings and his affairs with other women. He was also an atheist.

But Archbishop Paglia fell over his own words in praising the memory of the man who died in May last year without having reconciled himself with Christ and the Church. During his speech, he called Pannella a “man of great spirituality.”

“From the beginning, when we met in the 1990’s in a common interest for the figure of Ibrahim Rgova whom he called ‘the Gandhi of the Balkans,’ we spoke of the force of ideals and I like to say of Pannella that he was a man of great spirituality,” Paglia said. “Towards the end, he would say: ‘I chose not holy matter but the holy spirit, not property but spirituality … That is shown by this book in a really beautiful way.”

Smiling, laughing and obviously taking pleasure in his positive memories of Pannella, Paglia went on to remark: “He used to say that we Catholics have a tendency to leave the Gospel to one side while it is the force that can change the world – and he would invite me to join the Radical Party.” Paglia never went so far as to do so, but he did say that Pannella’s death had been “a great loss, not only for the people of the Radical Party, but also for our country.”

The Italian Bishop’s Conference is perhaps not so far removed from this opinion as it sent an official delegation to the Radical Party’s march for a general amnesty in Rome last November.

Even more revealingly, Paglia said about Pannella and his ideals: “Today, it is vital to find a form of proximity through which to unite those who are diverse, in order to build a unity of purpose or a unity that embraces all … ” This is the “diversity” rhetoric toted by the internationalists and globalists who deem religions and traditions to be today’s main threat to world peace, and who openly work toward a global spirituality where all faiths are equal and relativism rules.

Pannella received several phone calls from Pope Francis. Paglia fondly remembers his friend’s last birthday when the Pope entrusted him with his book about Mercy and a medal for Pannella. That same day, the Pope flew to Lesbos to visit Middle-Eastern and African refugees. Pannella was deeply moved, Paglia said. He immediately wrote a letter to the Pope saying ‘I would have liked to go with you.’” Paglia added: “That was because he understood that this was the way to transform the world and Italy when so many walls are still being built. Others have appeared since his death to build other walls: Marco’s way of speaking must still be heard, it is the language of universality.”

When Pannella was dying, Paglia recounts how he got a phone call during a meeting with the Pope, who said, “Go there immediately and greet him for me … ”

“In July,” Paglia continued, “when Marco was already dead, the Pope thanked me for what I had done: ‘Marco lived as a believer, ready to pay the price with his very self for what he believed.’”

Paglia is of a similar opinion: “His story shows how a man can help history to go forward towards the defense of each and every person’s dignity, specially those who are marginalized. … I take great pleasure in saying that Marco was truly a spiritual man who fought and hoped against all hope … ” Pannella had a message, Paglia continued, “We should never give up … We must receive and keep his vitality.”

Of this man who put every effort into promoting the transgression of God’s law, the president of the Pontifical Academy for Life also said: “He dreamed of a convent that would not be established on the rules of others but on his own, the rules of radical thought. … He was against transcendence, he would say that rules do not descend from Heaven, it is man who creates them and makes sure they are applied. If by the word transcendence he was designating something that is exterior, far away or platonic, it is obvious that we should agree with Marco, because ideas should be incarnated in or own flesh!”

This effusive and fuzzy admiration leaves no space at all for God’s truth or for the commandments, making – as it does – man the sole author and measure of his own morals. A very ancient temptation …

Several Italian newspapers called Paglia’s speech an effort to canonize Pannella and to preach his new Gospel. His conclusion, as he turned toward Pannella’s biographers, tends to prove them right.

“I believe that today Marco, who is full of the spirit, is still blowing and asking us to help the spirit whose breath makes history move,” Paglia said. “Thanks to your book, in a way Marco is still alive, as the inspiration for a more beautiful life not only for Italy but for the world, that more than ever needs people who can speak like him – and there are fewer and fewer. … I am glad that the spirit of Marco can help us to live in that same direction!”

Not surprisingly, Riccardo Cascioli, editor of La nuova Bussola Quotidiana, one of Italy’s more conservative newspapers, called the author of this mind-boggling eulogy the president of the “Pontifical Academy for Death.”