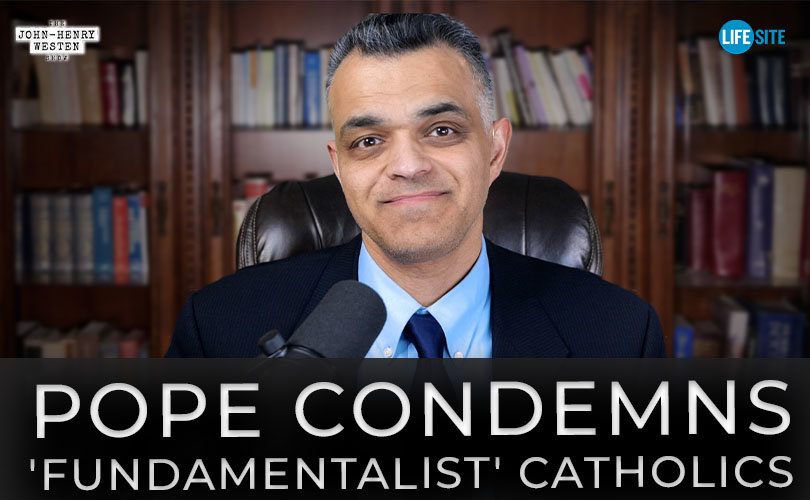 February 3, 2021 (LifeSiteNews) – We truly live in a world where good is considered evil and evil, good. Where everything is upside down and backwards. Where Black Lives Matter gets nominated for the Nobel Peace Prize and John Kerry, who, with his wife owns multiple estates, cars, SUVs and a jet, is now the Biden administration’s climate czar urging Americans to take public transit to save the planet.

But nothing is so bizarre as Pope Francis’ latest comments using scatological terms to describe the media and bashing Catholic ‘fundamentalists’. Coming in a close second this week, is San Diego Bishop McElroy who commented on Holy Communion for President Biden. But at least Archbishop Vigano has a very Catholic message for the Feast of the Purification of Mary, also known as the Feast of the Presentation, which we celebrated yesterday.

In shocking comments made in an interview with the US Bishops’ news agency Catholic News Service Monday, Pope Francis used the term “coprophilia” – which, according to Wikipedia, refers to “sexual arousal and pleasure from feces.”

It’s not the first time the Pope has used the term to the consternation of Catholics. He made similar remarks in 2016 using the same scatological term.

The Pope’s comments came as he described the four main sins of journalists who are “always wanting to communicate scandal, to communicate ugly things, even though they may be true.”

The Pope went after what he called “traditionalists” in the United States, suggesting that they need healing. “The Church [in the U.S.] is very alive, very, very alive. There are perhaps traditionalist groups, but we have those here in the Vatican too. This can be healed,” he said.

From the transcript of his remarks in that meeting, which is posted at the Vatican website, you can read that he also came down very hard on what he called “fundamentalists” in the Catholic Church. (The Vatican has removed the full transcript from their site but it is still available from La Stampa’s Vatican Insider)

Of note, there was no similar condemnation of progressive groups inside the Church.

Meanwhile in the US, President Biden’s so-called “Catholicism” continues to make headlines with the mainstream media rejoicing in his faith, as he promotes abortion not only in America but abroad.

Cartoonist Patrick Cross, who has been a contributor to LifeSite, captured the reality of the situation well with this cartoon where Biden is asked the characteristic question of Catholic baptism, “do you renounce satan and all his pomps and works,” to which Biden replies, “personally or politically?”

But despite his very evident lack of faith and scandalous promotion of abortion, many US bishops are insistent that Joe Biden should not be denied Holy Communion.  Speaking at a Georgetown University conference Monday, San Diego Bishop Robert McElroy said it would amount to weaponizing the Eucharist.

“I do not see how depriving the President or other political leaders of the Eucharist based on their public policy stance can be interpreted in our society as nothing less than a weaponization of the Eucharist and an effort not to convince people by argument and dialogue and reason but, rather, to pummel them into submission on this issue.”

McElroy is one of the most controversial figures in the US episcopacy. He has long-advocated for the downplaying of the Church’s stance on abortion, altering its stance on homosexuality and female clergy, and has pointed to Pope Francis as an excuse for insisting that pro-abortion Biden should receive communion.

But faithful Catholics and pro-lifers are making their own voices heard, and very powerfully. You have to check out this video titled  A Message for President Biden: The Unified Voices of Africa. It was released last week in response to the Biden administration’s  announcement  that it would repeal the “Mexico City Policy” which would restore foreign aid to organizations involved in abortion.

Obianuju Ekeocha, a Nigerian-born human rights activist who is the founder of Culture of Life Africa, also put out a video about Joe Biden and abortion. Be sure to check out the whole video by clicking here.

Yesterday, was the Feast of the Purification of Mary, more well known today as the Feast of the Presentation of the Lord in the Temple. At LifeSite, we published a beautiful reflection on the Feast from Archbishop Carlo Maria Viganò, which I encourage you to check out. But in it, he made this special appeal to priests and religious – nuns and monks. Speaking of the troubled times in the Church and the world, he said:

“In this supernatural battle, the contribution of religious men and women is fundamental: this is why it is more necessary than ever that consecrated souls rediscover the sacrificial dimension of their vocation, offering themselves in holocaust as expiatory victims. This, after all, is the heart of the religious vocation and of being Christian itself: becoming like Christ and following Him on the Cross, so as to sit at His right hand in blessed eternity.

I therefore invite those who have the privilege of having chosen the state of perfection to pray with renewed ardor, to fast with zeal, and to do penance. Finally, let us ask the Holy Spirit to touch the Ministers and Religious who have been led astray, granting them the gift of repentance and the grace of forgiveness.”

And finally, do you remember that spoof ad for the ‘manslator’? It was a translator for woman-speak to something that men can understand.

Honestly, I wish there was such a thing sometimes. Even after more than 25 years of marriage, I’m still not the best at “womanese.” But I want to introduce you to a great teacher. Not only on womanese but on many things to better your marriage and your spiritual life. Deacon Dr. Bob MacDonald is a personal friend and a great Catholic psychotherapist who is now retired. One of his wedding homilies went viral on LifeSite years ago.

He’s now got a website up featuring – all for free – many of his talks and inspiring writings. You can check out Deacon MacDonald’s website by clicking here.