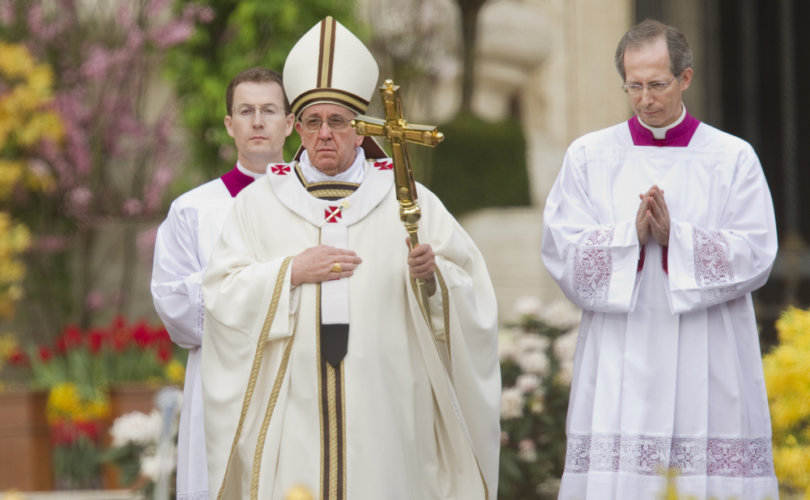 Francis doubles down on Amoris Laetitia

In the wake of substantial criticisms of his Apostolic Exhortation Amoris Laetitia, Pope Francis has stated that “everything” written in the document is “sound doctrine.” The remarks are especially pertinent in light of the first critical observations on the exhortation issued by Raymond Cardinal Burke which stressed that parts of the document were the Pope’s personal opinion and not to be taken as magisterial.

Speaking at the opening of the conference of the diocese of Rome in the Lateran Basilica on June 16, Pope Francis said: “For your own peace of mind, I have to tell you that everything that is written in the exhortation [Amoris Laetitia] – and here I refer to the words of a great theologian who once was a secretary of the Congregation for the Doctrine of the Faith, Cardinal Schönborn, who presented it [Amoris Laetitia] – everything is Thomistic, from the beginning to the end. It is sound doctrine. But, so many times, we want it to be so that sound doctrine would have a mathematical security which does not, in fact, exist – neither in a lax and indulgent way, nor in a stiff and rigid way.” (Translation courtesy of Dr. Maike Hickson 1Peter5)

According to Vatican expert Sandro Magister, the pope was mistaken when he said that Cardinal Schönborn was a “secretary” of the CDF. The cardinal is currently a member of the CDF, but has not held the office of secretary.

An Absolute Change on the Death Penalty

In a video message sent to the sixth World Congress Against the Death Penalty, which opens today, Pope Francis made his strongest remarks against the death penalty, which he said contradicts the plan of God in that the “commandment ‘Thou shalt not kill’ has absolute value and applies both to the innocent and to the guilty.”

While most Catholics agree with severely limiting the death penalty, an absolute prohibition would be counter to thousands of years of Catholic thought. Cardinal Avery Dulles warned in 2002, “If the Pope were to deny that the death penalty could be an exercise of retributive justice, he would be overthrowing the tradition of two millennia of Catholic thought, denying the teaching of several previous popes, and contradicting the teaching of Scripture (notably in Genesis 9:5-6 and Romans 13:1-4).”

The 1992 Catechism teaches: (2267) “Assuming that the guilty party's identity and responsibility have been fully determined, the traditional teaching of the Church does not exclude recourse to the death penalty, if this is the only possible way of effectively defending human lives against the unjust aggressor.”

In his message Pope Francis said:

One sign of hope is that public opinion is manifesting a growing opposition to the death penalty, even as a means of legitimate social defence. Indeed, nowadays the death penalty is unacceptable, however grave the crime of the convicted person. It is an offence to the inviolability of life and to the dignity of the human person; it likewise contradicts God’s plan for individuals and society, and his merciful justice. Nor is it consonant with any just purpose of punishment. It does not render justice to victims, but instead fosters vengeance. The commandment “Thou shalt not kill” has absolute value and applies both to the innocent and to the guilty.

In addition to the Scripture verses he quotes, Cardinal Dulles was referring to teachings such as these:

Roman Catechism of Council of Trent: The power of life and death is permitted to certain civil magistrates because theirs is the responsibility under law to punish the guilty and protect the innocent. Far from being guilty of breaking this commandment [Thou shalt not kill], such an execution of justice is precisely an act of obedience to it. For the purpose of the law is to protect and foster human life. This purpose is fulfilled when the legitimate authority of the State is exercised by taking the guilty lives of those who have taken innocent lives.”

Innocent III: “The secular power can without mortal sin carry out a sentence of death, provided it proceeds in imposing the penalty not from hatred but with judgment, not carelessly but with due solicitude.”

Pius XII: “Even in the case of the death penalty the State does not dispose of the individual’s right to life. Rather public authority limits itself to depriving the offender of the good of life in expiation for his guilt, after he, through his crime, deprived himself of his own right to life.”

Prior to being elected Pope, Cardinal Joseph Ratzinger taught: “Not all moral issues have the same moral weight as abortion and euthanasia. For example, if a Catholic were to be at odds with the Holy Father on the application of capital punishment or on the decision to wage war, he would not for that reason be considered unworthy to present himself to receive Holy Communion. … There may be a legitimate diversity of opinion even among Catholics about waging war and applying the death penalty, but not however with regard to abortion and euthanasia.”