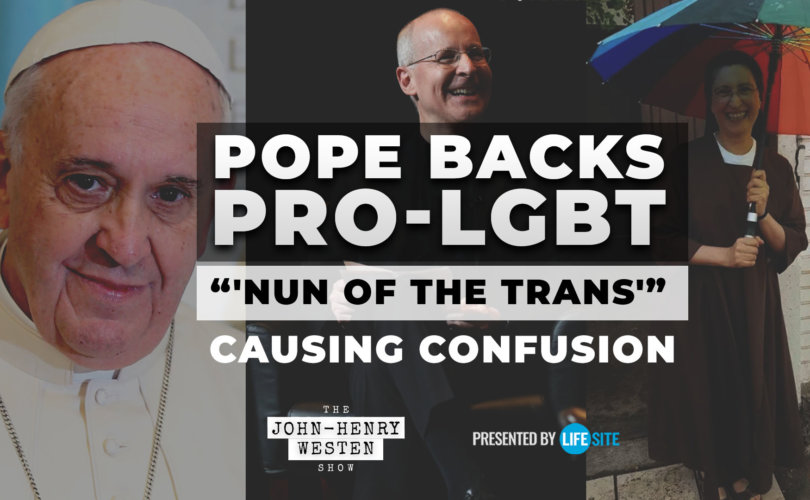 August 25, 2020 (LifeSiteNews) – Pope Francis has shocked the world by praising a nun who promotes Catholic acceptance of cross-dressing, “sex-change” operations, and homosexual relationships.

These issues are tough, and it’s complicated by the fact that this nun is actually doing some very good things helping people out of dire poverty.

Pope Francis’ praise came in light of her opening a new complex of 12 small apartments reserved solely for men claiming to be women, and their sexual partners. In his communication with Sr. Cremona, the Pope referred to her transgender clients as “girls.”

“Dear Monica, God, who did not go to the seminary or study theology, will repay you abundantly. I pray for you and your girls,” he said.

This isn’t the first time Pope Francis has given remarks opposite of what the Catholic Church traditionally teaches about the rejection of one’s God-given sexual identity.

On October 2, 2016, Pope Francis referred to a woman who underwent a “sex-change” operation as a man. He referred to her as having “married” another woman and admitted to inviting and receiving them in the Vatican in 2015, describing the couple as “happy.” Clarifying his use of pronouns, the pope said, “He that was her but is he.”

The Pope also said the woman, who “felt like a man” but “was physically a young woman,” eventually “got married” after a sex-change surgery in her twenties. “He wrote me a letter saying that, for him, it would be a consolation to come [see me] with his wife,” the Pope said. “I received them and they were very happy.”

And you can add to that the fact that the Pope has openly promoted one of the biggest promoters of homosexuality and transgenderism in the Catholic Church in America – Father James Martin.

The Pope named Fr. Martin to the Pontifical Council for Social Communications, and had Martin speak at the Vatican’s World Meeting of Families. He also met with him personally in an audience, the photos of which were used by Fr. Martin to attest to the Pope supporting his agenda – which has garnered opposition from several U.S. bishops.

The issues surrounding transgenderism are complex and today more so as society is pushing hard on this agenda and fiercely claiming those who question it in any way are purveyors of hatred. We have gone so far as to criminalize – at least in some states and nations –psychological help for those wishing to normalize their sexual desires.

However, the Catholic Church’s teachings on the matter of sexuality are very clear and they cannot change.

Those teachings were succinctly summarized last year in a document by various high-ranking prelates, including Cardinal Raymond Burke and Bishop Athanasius Schneider. Called the Declaration of Truths, the document said it is a rebellion and “grave sin” for a man to “attempt to become a woman.” It continues:

“The male and female sexes, man and woman, are biological realities created by the wise will of God (see Gen. 1: 27; Catechism of the Catholic Church, 369). It is, therefore, a rebellion against natural and Divine law and a grave sin that a man may attempt to become a woman by mutilating himself, or even by simply declaring himself to be such, or that a woman may in like manner attempt to become a man, or to hold that the civil authority has the duty or the right to act as if such things were or may be possible and legitimate (see Catechism of the Catholic Church, 2297).”

In 2000, the Vatican's Congregation for the Doctrine of Faith issued confidential guidance to bishops noting that “sex-change” procedures do not alter a person’s gender. The document instructed bishops never to alter the sex listed in parish baptismal records and said Catholics who have undergone “sex-change” procedures are not eligible to marry because in the eyes of the Church they would be “marrying” someone of the same sex.

The Church’s traditional stance on sexual teaching, while it is characterized by the secular world as unfeeling and even cruel, in actual fact speaks to the reality of human sexuality – it is truly the only loving and caring stance one can take.

The falsehood of supporting lifestyles which lead to physical, mental, and spiritual harm may seem caring on the surface, but in reality, it deprives individuals afflicted with sexual dysfunction the care and help they need and deserve.

The best spokesmen for the truth on these difficult issues are those who have gone through “sex-change” operations and have testified to the devastation that has resulted. Walt Heyer is a man who lived as a “woman” for eight years. His testimony, which can be read by clicking here, must be listened to, as it encapsulates the reality of sex-change and the harm of affirmation of rejection of one’s God-given sex.

There are many other testimonies from those who have gone down the road of so-called “gender transition” and who warn of its devastation and the saving power of Christ who was able to deliver them from that harmful and sinful lifestyle.

But even though the Church’s teaching is clear on the matter, the confusion being caused by Sr. Cremona, Fr. James Martin, and even the Pope himself is very grave indeed. Added to that, there is the societal pressure even in the form of laws that are crushing Catholics and all who would adhere to morality on these very issues.

These issues are complex and in the case of Sr. Cremona, they are exacerbated by the fact that she is rescuing these individuals from sometimes dire poverty and giving them clean living quarters. Oh, what a joy if she did that like a Mother Teresa without validating their sexual sin. It can clearly be seen that she is affirming these poor people in their sexual sin as she is permitting these men dressed and sometimes mutilated to look like women to live in these apartments with their same-sex partners.

Moreover, Sr. Cremona has promoted LGBT so-called “rights” and gay “pride” marches. She could have helped these poor people out of poverty while offering them the Christian truth about God-given sexuality. Sure, that would be a harder path, sure, society would not celebrate her work were she to do it that way. But it would be the way of Christ, and it would minister to these poor people body and soul, giving them help both in this world and in the next.

If you want a good picture of the new and false Church being promoted, knowingly or unknowingly, by Pope Francis, Sr. Cremona is a good place to look.

There is a distortion of the Catholic faith happening to such an extent that the faith is becoming unrecognizable. There is a famous transgender activist and comedian in Argentina with whom Sr. Cremona has associated. This biological man, who claims to be a woman, calls himself Lizzy Tagliani. In a video in which he acts as an on-location reporter for a TV show, he walks around an outdoor Catholic celebration where he speaks with several people in the crowd, eventually speaking also with an extraordinary minister of Holy Communion who is actually distributing Holy Communion.

The transvestite Tagliani asks the extraordinary minister of Holy Communion if he can receive even though he may have sinned. And she gives him Communion. There is commotion in-studio as this comes as a surprise, and Tagliani says jokingly, “If I melt I know why – because I received Communion while being in sin.” After the laughter dies down, the host says: “Anyway the Pope says to cause trouble,” to which Tagliani responds, “Of course, I just made a mess just like Pope Francis said we should.”

The situation in the Church is dire. We seem to have arrived at the times prophesied in Holy Scripture where even the elect will be confused. And I want to ask you to join me in a plea to all our faithful bishops and cardinals to speak out and defend the faith which is being corrupted by the Pope himself. Yes, these times are hard, and yes, it is a difficult stance to take. But they are called to defend the faith. In fact, the very apostle who was the one to publicly confront the first Pope – St. Peter – on his error, said this to the Bishop St. Timothy:

“I charge you in the presence of God and of Christ Jesus, who is to judge the living and the dead, and by his appearing and his kingdom: preach the word; be ready in season and out of season; reprove, rebuke, and exhort, with complete patience and teaching. For the time is coming when people will not endure sound teaching, but having itching ears they will accumulate for themselves teachers to suit their own passions, and will turn away from listening to the truth and wander off into myths. As for you, always be sober-minded, endure suffering, do the work of an evangelist, fulfill your ministry.”