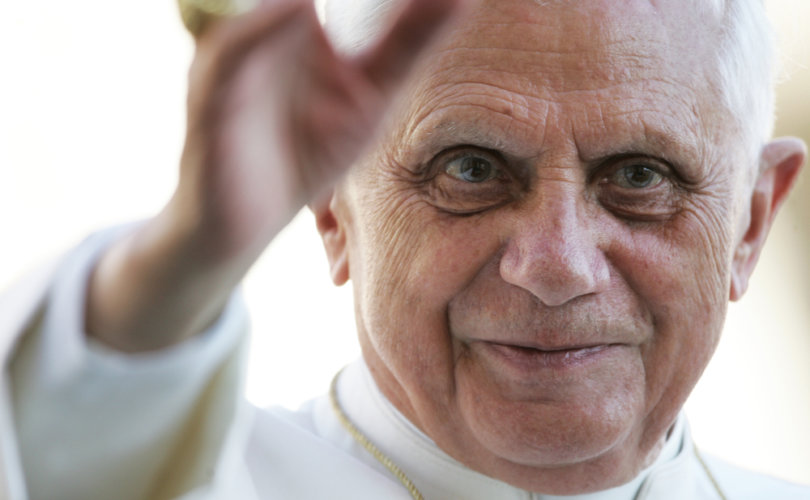 Pope Benedict XVI greets the pilgrims during his weekly general audience in St Peter's square at the Vatican on October 26, 2006.Giulio Napolitano / Shutterstock.com

March 30, 2020 (LifeSiteNews) – Amidst reports that the Vatican is seeing more coronavirus infections among its members, a well-informed source in Rome told LifeSiteNews that Pope Emeritus Benedict XVI is healthy and well-protected. He lives secluded in his residence Mater Ecclesiae and offers prayers for the afflicted and those who take care of the sick.

Since the news broke that there a new coronavirus cases in the Vatican, Catholics around the world wondered about the status of Pope Benedict. LifeSite reached out to a well-informed source who responded under condition of anonymity. The source related that Pope Benedict is doing well and in good spirits.

Pope Benedict is living at the monastery Mater Ecclesiae in the Vatican and follows the strict rules of the Italian government, the source told LifeSiteNews. Pope Benedict lives a cloistered life. He prays daily for the victims of the pandemic and their loved ones. Additionally, Pope Benedict offers special prayers for medical doctors and the health care personnel, as well as for those who carry political responsibility and make important decisions regarding the health and safety of citizens.

On Saturday, March 29, it was reported by Reuters that neither Pope Francis nor his close collaborators have the virus infection and that 170 people at the Vatican were tested.

Italy itself so far has 101,739 infected persons, with 11,591 patients who have died of the coronavirus.

Pope Benedict XVI has resided in Mater Ecclesiae monastery since May of 2013, the year he resigned.

He has only recently raised his voice in defense of priestly celibacy when publishing an essay, in a collaborative book by Cardinal Robert Sarah. This publishing project had caused a controversy, at the end of which Pope Francis decided that he did not want to have Archbishop Georg Gänswein – the Prefect of the Papal Household – at his side during public appearances. Thus, Gänswein – who is also the personal secretary of Pope emeritus Benedict XVI – remains at the retired Pope’s side during this time of trial. Additionally, Pope Benedict is being taken care of by some religious sisters.