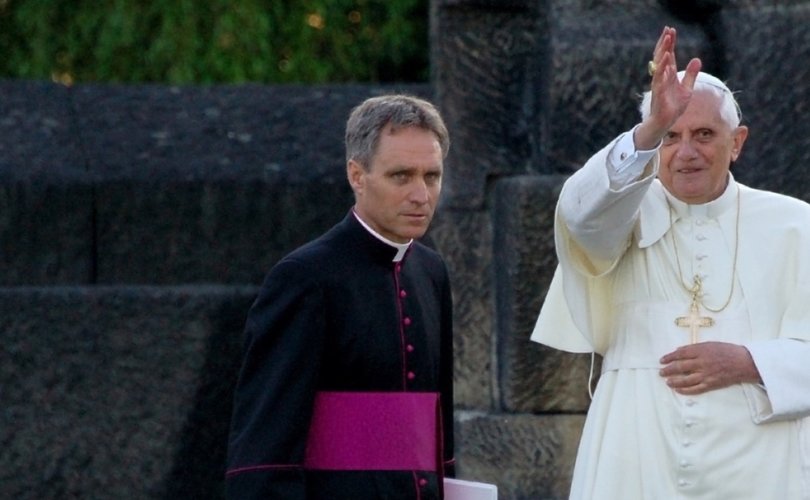 September 11, 2018 (LifeSiteNews) – Pope Emeritus Benedict’s personal secretary and the head of the papal household has commented on the abuse crisis that is rocking the Catholic Church, stating that if the Church does not achieve renewal in its wake, civilization is “at stake.”

“If the Church this time does not achieve a renewing of herself with God's help, the whole project of our civilization is again at stake. For many, it already seems as if the Church of Jesus Christ could never recover from the catastrophe of her sin which right now seems nearly to swallow her,” Archbishop Georg Gänswein said at a gathering in Rome today for a book presentation of The Benedict Option by American author Rod Dreher.

Gänswein spoke about the “satanic” abuse crisis in the Church. At one point, he referred to Cardinal Willem Eijk's statement last May in which he referred to the Catechism of the Catholic Church’s prophecy of a “final trial” for the Church before the second coming of Christ. Importantly, in that same statement, Eijk had publicly called upon Pope Francis to make clarifications with regard to the intercommunion debate in Germany.

Kath.net, the Austrian Catholic news website, published the full speech of Gänswein which he delivered today at the Italian Parliament in Rome.

Last month Archbishop Viganò accused Pope Francis in a detailed 11 page document of covering-up for now ex-Cardinal McCarrick despite being made aware of his sexual abuse of seminarians and priests. The Archbishop called on the Pope to resign. A day after news of the letter broke, Pope Francis told reporters that he was “not going to say a word” about the allegations. One bishop called the Pope’s response a “non-denial.”

Now, numerous priests, bishops, a cardinal, tens of thousands of lay Catholic men and women, as well as respected international mainstream news outlets (here, here and here) are calling for Viganò’s claims to be thoroughly investigated.

Archbishop Gänswein made it clear that the Church finds herself in an intensely turbulent situation.

In this, he said, “I am obviously not alone.”

He continued: “In May, also the archbishop of Utrecht in the Netherlands, Cardinal Willem Jacobus Eijk, admitted that the current crisis reminds him of 'the final trial in the Church,' as the Catechism of the Catholic Church in paragraph 675 describes it with the following words.” These words of the Catechism then refer to the trial which will “shake the faith of many but which the Church has to endure before the return of Christ.” Gänswein further explained that “in the same Catechism, it further says: 'The persecution that accompanies her pilgrimage on earth will unveil the ‘mystery of iniquity.’”

Even though Archbishop Gänswein would of course make no mention whatsoever of criticism of Pope Franics, it is very significant that he would even reference the text written by Cardinal Eijk.  Cardinal Eijk's text is the most earnest and the most prominent call coming from a cardinal and addressed to the Pope, asking him to resolve the doctrinal confusion in the Church, highlighting that this confusion caused by the Pope has an apocalyptic character.

The German prelate also made reference to Pope Benedict's own 2010 remarks on the airplane flight to Fatima in which he spoke about the meaning of the Third Secret of Fatima and mentioning that attacks on the Church would come from “within.”

Gänswein also noted that “the Church who had been rooted among the people [Volkskirche] into which we have been born – and which never existed as such in America as it existed in Europe – has long died in this process of the darkening.” He then asks: “Does this sound too dramatic for you?”

Throughout his speech, Gänswein made repeated references to the public statements of Pope Benedict, for example when speaking about the papal trip to the U.S. in 2008. The archbishop said that Benedict in a speech delivered in the U.S. at the time “tried to shake up” the U.S. bishops. He commented: “It seems to have been in vain, as we see today.”

“The lamentation of the Holy Father (Benedict) was not capable of stopping the evil, nor the lip services of a large part of the [U.S.] hierarchy,” he said.

Gänswein also referred back to Pope Benedict's 2012 warning that the spiritual crisis which takes place in the West is the gravest crisis since the decline of the Roman Empire at the end of the fifth century. “The light of the Christian civilization is being extinguished everywhere in the West,” were the words of Pope Benedict.

While speaking of the grave abuse crisis which is now raging in the U.S. and other parts of the world, Gänswein made a comparison with the terrorist event of 11 September 2001 in the U.S. – without wishing, thereby, to diminish the suffering of the victims on that day – saying that the “Catholic Church, filled with disdain, looks upon her own September 11, also when this catastrophe, unfortunately, does not refer to only one single date, but to many days and years, and upon innumerable victims.” He later comes back to this topic, speaking about the “satanic '9/11' of the Universal Catholic Church.”

The Archbishop ended his talk with some hopeful remarks. “Even the satanic '9/11' of the Universal Catholic Church can neither weaken nor destroy the truth about the origin of her foundation by the Risen Lord and Conqueror.” “That is why I honestly have to admit that I perceive this time of a great crisis – which is not anymore hidden to anyone – also as a time of grace” because “the truth will make us free, as Our Lord has assured us.”