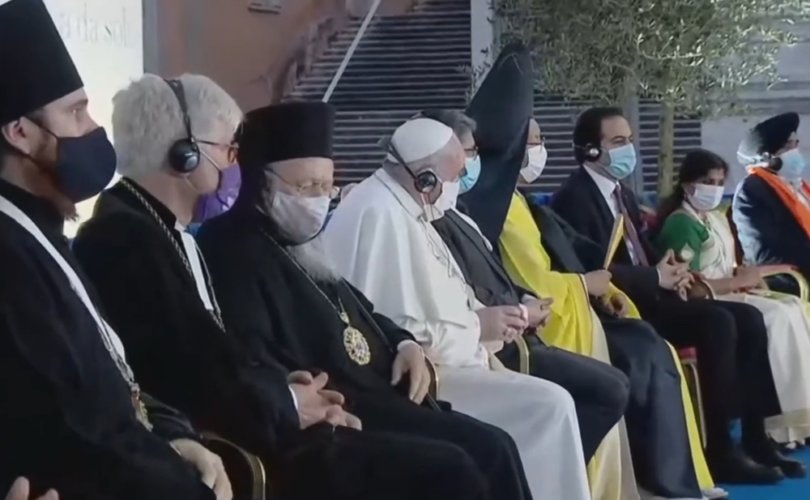 October 29, 2020 (LifeSiteNews) – Catholic News Agency is reporting that it has seen a letter from the Vatican’s Secretary of State noting that Pope Francis' Christmas liturgies at the Vatican will be offered without public participation this year.

The letter, sent by the Secretariat of State to Vatican embassies, said the Christmas Mass would be celebrated “in a private form without the presence of members of the diplomatic Corps.” It also noted that the liturgies will be streamed online.

This letter, believe it or not, was sent the very day that the Vatican hosted an award ceremony in the Vatican Gardens for the filmmaker who did the film Francesco, which has caused a ton of controversy thanks to the Pope’s pro-homosexual civil unions remarks.

Moreover, it came just two days after the Pope took part in a Rome ecumenical gathering with Buddhist, Seik, Muslim, and other religious leaders. The event was titled, “No One is Saved Alone: Peace and Fraternity,” and took place on October 20.

The two halves of the event were simultaneous prayer services in various locations near Rome’s Piazza del Campidoglio. Pope Francis presided first over the Christian prayer service in the  Basilica of St. Mary of the Altar of Heaven (Basilica di Santa Maria in Ara Coeli).

This all brings to my mind the remarks of Archbishop Carlo Maria Viganò, who recently said that “the Holy See wants to replicate the unfortunate lockdown of past months, which deprived the faithful of the Mass and the Sacraments.”

His Excellency also said that the pope’s cancellation “has left the faithful bewildered, scandalized and abandoned by a hierarchy that found a way to gather in the Basilica of Santa Maria in Ara Cœli for a syncretistic rite presided by Jorge Mario Bergoglio, but which does not hesitate to suspend the celebration of Holy Mass on the Night in which the Church celebrates the Birth of the Savior.”

You can read more of Archbishop Viganò’s thoughts on Pope Francis not having a public Christmas Mass by clicking here.