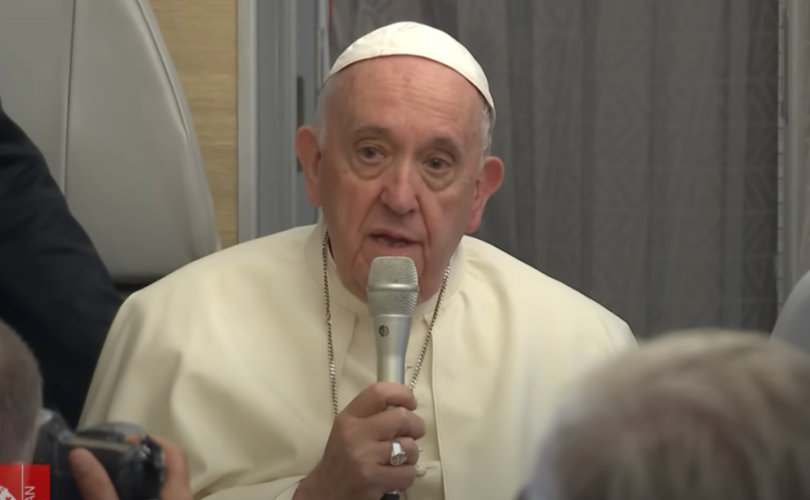 (LifeSiteNews) – During another infamous airplane interview, Pope Francis dropped a bomb from 30,000 feet regarding the topic of Canadian Residential Schools.

It wasn’t enough that the Holy Father and many bishops sat by and breathed in the smoke of Satan during a diabolical pagan ritual that took place during his Canadian visit. But the Pope seemingly deemed it necessary to deliver another parting blow to the feeble edifice of Canadian Catholicism.

Asked if he would use the term genocide to describe the involvement of some priests in the Canadian government’s former school program, he said yes.

Through a translator, he stated, “I asked for forgiveness for what has been done, which was genocide, and I did condemn this.”

He added, “To take away children, to change the culture, their mindset, their traditions — to change a race, an entire culture … yes I (do) use the word genocide.”

To say these remarks are explosive is an understatement, but more than that, they are utterly false as genocide is not what happened at Residential Schools even in the worst of cases.

It is not necessary to have an opinion about the goodness or badness of the Residential School system, the Canadian government, or even the Catholic Church to properly apply the term genocide to a given situation.

Whether or not any form of genocide took place is a matter of definitions and descriptions of what genocide is.

If we refer to the Merriam-Webster English Dictionary, we find that genocide is defined as the “deliberate and systematic destruction of a racial, political, or cultural group.”

This could not apply to residential schools without greatly stretching the truth.

There was no destruction of a racial group, as this could only be done by doing something like stopping the procreation of that group, which never took place.

Furthermore, there was no political ideology suppressed. In addition, it can only be said that a “cultural group” was destroyed if we believe that having to be educated in a lingua franca of a nation is tantamount to having one’s culture destroyed.

If this is applied to residential schools, then it must be applied to literally all schools in Canada where students are required to speak and read and write in English or French if it is not their native tongue.

The Oxford Language Dictionary defines genocide as “the deliberate killing of a large number of people from a particular nation or ethnic group with the aim of destroying that nation or group.”

Nothing in this definition could be used to justify Francis’ statements, even if the mass grave hoax was taken at face value.

Not your average genocide

If what happened was truly genocide, then we would not expect any positive memories of the genocide.

Hundreds of thousands of children went through the system over decades, and many of them even said that they were afforded a positive experience.

As part of the research that took place for the Truth and Reconciliation Commission, numerous alumni from the schools were interviewed, and a large number of those interviewed reported positive experiences.

One such person was even the chief of a native band in the Northwest Territories.

Chief Cece Hodgson-McCauley of the Inuvik Dene Band spent 10 years at a residential school and was taken in as an orphan.

She praised the school and said, “Those were the best years of my life. My family says the same thing, my sister swears by it. We were treated wonderfully.” It should be noted that the article that contained the Chief’s comments stated that her comments were amidst the “hundreds and thousands of stories of physical, sexual, and emotional abuse against first nations children.”

It is estimated that about 150,000 students went through the schools, and they were only made mandatory by the government for a portion of the time they were in operation. Are we to believe that there are “hundreds of thousands” of claims of violence and abuse done to the children? Does this mean that each and every child was harmed multiple times for the entire duration of the system? That is an absurd claim.

Chief Hodgson-McCauley also said, “They taught us how to sew, make our own clothes, they even showed us some neat arts like sewing quilts and beads and things like that. And we worked in the kitchen, learned how to cook … They’re only reporting the bad side, and the more you lie, the more you say it’s bad the more money you make, and the lawyers are making money because they’re pushing people to tell their stories.”

Now, it may be retorted that this is just one story, and that is true, but as I said, there are many such stories.

It is also true that a positive story does not negate the suffering of another, but we are here discussing whether the term genocide applies.

There are many ways to commit evil in this world, such as rape, abuse, fraud, slander, etc. These are all terrible things, but they are not genocide.

I cannot imagine that a survivor of the Rwandan Genocide would say “those were the best years of my life, they taught us things, they are only reporting the bad side.”

Again, you may think the residential system was a bad government program, but there are those who attended the schools who would disagree strongly and would not call it “genocide” by any stretch of the imagination.

It should be noted that the United Nations’ (UN) definition does leave a bit of wiggle room for speculation about genocide, although even by the broad definition of genocide used by the UN it would be dubious to apply such a definition to the case of residential schools.

The UN definition of genocide is as follows:

[G]enocide means any of the following acts committed with intent to destroy, in whole or in part, a national, ethnical, racial or religious group, as such:

It would likely be argued that since there was a forcible transferring in some cases of indigenous children to the schools, that this would be tantamount to one of the aspects of genocide according to the UN.

However, the children were not transferred forcibly in many cases as attendance was voluntary for a time – which is not to justify any forcible transfers – and it would be unreasonable to say that they were transferred to a “group” or at least an identifiable group, especially in the cases of Catholic schools.

Catholicism is not an ethnic group, and is in fact universal, and there are many native Catholics, as there were then. It could not be said that the children were the victims of genocide by going to Catholic schools considering that many of them were already Catholic or their parents were.

Also, even by broad UN standards, the application of the term genocide would not suffice. The UN interpretation of their own definition reads: “The intent is the most difficult element to determine. To constitute genocide, there must be a proven intent on the part of perpetrators to physically destroy a national, ethnical, racial or religious group.”

In addition, the UN adds, “Cultural destruction does not suffice, nor does an intention to simply disperse a group.”

So, even if it could be proved that the residential system contributed to the destruction of a defined culture, it would have to be proved that this was the declared and desired intention in a very specific way. Assimilation does not equal destruction, as cultures naturally assimilate to one another all the time.

Finally, in the case of Catholic schools, it would be impossible to suggest any intentional and systemic cultural destruction took place, especially considering the history of what Catholic missionaries have done for indigenous Canadians.

One example of Catholic priests contributing to the preservation of indigenous culture would be the written alphabet created by St. Jean de Brebeuf for the Huron peoples and there language so that they could write their history and stories down. He even ensured that missionaries learned to read and write in that language to better communicate.

As with many claims about Catholic history, the Pope’s recent commentary on “genocide” is as baseless as a Father James Martin book on theology.