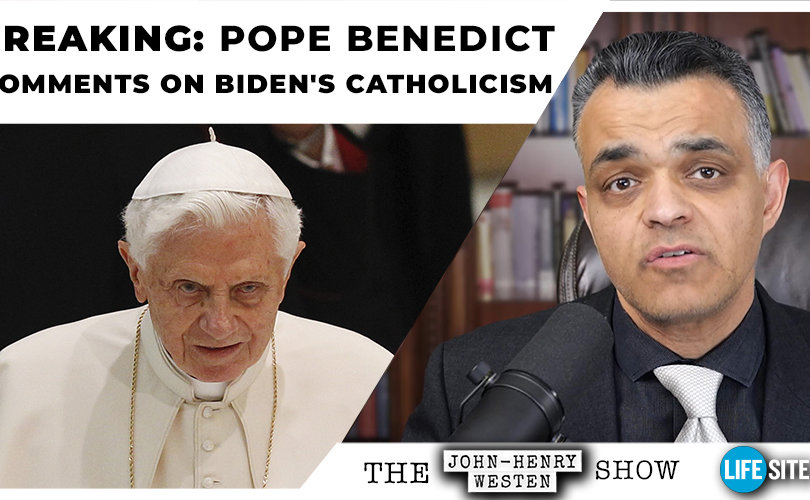 March 1, 2021 (LifeSiteNews) – Wow, just wow. Some unbelievable comments today from Pope Benedict XVI in a new interview with an Italian newspaper where he speaks of Joe Biden’s Catholicism. And if you missed the attack on the Holy Mother of God from Biden’s pick for the head of HHS, you need to see this. In this show I’m going to give you both the reason for all this insanity and the solution to it.

In a new interview  released today by the Italian newspaper Corriere Della Serra, Pope Emeritus Benedict XVI said of President Joe Biden, “It is true, he is Catholic and observant.” Benedict XVI added that Biden “is personally against abortion.” Further demonstrating his misinformation about US political realities, the pope emeritus said of Biden “on gender politics we have not yet fully understood what his position is.”

The only caveat Pope Benedict mentioned was what seemed like a lament. “But as a president he tends to present himself in continuity with the line of the Democratic Party,” said the former pope.

What is Pope Benedict watching in terms of media or news that leads him to believing or worse yet parrot that Biden is personally opposed to abortion?

In his first two weeks in office, Biden has pledged to make abortion available to “everyone” by “codifying” the Supreme Court’s 1973 pro-abortion decision Roe v. Wade, and has revoked the Mexico City policy that blocks federal funds from going to non-governmental organizations (NGOs) that provide abortions in developing countries.

And even if he saw none of that, he would surely have seen the letter from the US bishops conference that called out Biden on inauguration day for pushing abortion. A Jan. 20 Inauguration Day letter written by Archbishop José Gomez, president of the U.S. Conference of Catholic Bishops (USCCB), warned that Biden’s pledge to pursue anti-life and anti-family policies would advance “moral evils” in the areas of “abortion, contraception, marriage, and gender.”

But another thing Pope Benedict is quoted in the paper as saying is just as troubling. Benedict said he didn’t fully understand Biden’s stance on gender.

You know, I used to joke about ‘Catholic’ politicians like Biden saying he’d have to marry a homosexual couple himself and make it public for people to believe. But that’s no joke, Biden did exactly that! He personally officiated at a wedding ceremony for two men, making sure to photograph it and boast of it.

Moreover, on the very first day of his presidency Biden issued an executive order to force gender-confused men into women’s sports. And if all that is not evidence enough the so-called Equality Act Biden is pushing now is the death-knell for pro-family, pro-life and religious rights in America. It would force Catholic institutions to hire transgenders, female “priests” — or face sanctions. It would force Christian doctors and hospitals to perform transgender mutilation surgeries, abortions leaving no room for conscientious objection. And it would would increase girls’ risk of sexual assault and eliminate women’s sports by forcing the acceptance of biologically male athletes to compete in women’s sports and use women’s changerooms.

You know what underlies this thinking? It is the thinking of so many prelates in the Church about Catholicism. How can they act as if well, yes, there are all these sticky political issues on which we differ, but we are all brothers, everything is fine and we should all be polite and supportive of one another and dialogue and never stray into accusations or god forbid question someone’s sincerity of faith.

How? How can this be? How in the face of promoting the slaughter of a million American babies in their mother’s wombs every single year? How? I’ll tell you how. The false notion of universal salvation underpins this whole mess. If everyone is going to heaven, then really everything doesn’t matter that much. We can go along to get along. Because in the end it really doesn’t matter all that much. Thankfully, there are some priests who still get it, like Fr. Mark Goring.

But there is more.

Do you remember when in 2008 while running for office, Biden famously said: “I will shove my rosary beads down the throat of any Republican who says I am not a Catholic.” Well we got to know what he meant when he kept mentioning his rosary on TV, and using it to tout his faith in order both to attract Catholic votes and ward off Catholic criticism of his anti-Catholic positions.

Well he evidently likes to see the M.O. in his collaborators. Check this out. Did you catch the questioning of Xavier Beccera in his confirmation hearings for his nomination by President Biden to head up the US Dept of HHS?  It was enraging. He was asked over and over again if he had even a single reason where there could be any single limit on abortion. And what did he respond? By talking about his grandmother praying the rosary and blessing him.

It’s bad enough to be pro-abortion. But to invoke the Mother of God in the midst of excusing your advocacy of the killing of God’s children?

Xavier Beccera is another of these self-professed Catholics who is massively pro-abortion.

Lifesite’s Calvin Freiburger reports that as Attorney General of the Golden State, Becerra has shown a marked hostility to Americans who follow Judeo-Christian teaching on matters such as abortion and homosexuality, from forcing churches to subsidize elective abortions and nuns to subsidize contraceptives, to forcing pro-life pregnancy centers to advertise abortion resources, to refusing to fund state employees’ travel to South Carolina in protest of its law protecting adoption agencies that insist on giving children both a mother and a father.

But being pro-abortion and then invoking the Mother of God and the Holy Rosary. Have they lost their minds? Do they not fear God in the slightest?

Perhaps the blame though should not rest with them but on the priests and bishops who fail to strenuously warn them of the eternal punishment awaiting them for such blasphemies against the Mother of God.

I’m going to tell you how serious this is. Do you know that one of the main reasons God permitted the most stupendous miracles apart from the resurrection itself – the miracle at Fatima in 1917? It was because of the sins and outrages committed against the Blessed Virgin Mary. Jesus Himself spoke to Sr. Lucia about this in 1930.

Men of honour often warn their adversaries that harm to themselves can be forgiven but to mess with his family will garner a terrible retribution.

Jesus, being a perfect son to Mary guards Her honour and thus the incomprehensible abusing of the rosary to excuse the killing of the innocent is beyond imagination.

Where are the prophets among the bishops who will warn Biden and Beccera of the terrible justice of the Son of God they will face for having dared to blaspheme His Holy Mother?

Thank God for prophets such as Fr. Mark Goring who are not afraid to warn people of impending hell, and implore them to turn from their wicked ways and repent.

But I told you at the beginning that I would also be giving you the solution to this mess. And here it is. It goes back to the message of Fatima of course.

On December 10, 1925, the Mother of God with the Infant Jesus appeared to Sister Lucia.  The Blessed Virgin put Her hand on Lucia’s shoulder and showed Lucia a heart encircled by thorns which she was holding in her hand. The Child Jesus said: “

And let me quote from Sister Lucia directly from her book Lucia Speaks, Memoirs and Letters of Sister Lucia (taken from Guido del Rose)

“Have compassion on the Heart of your most holy Mother, covered with thorns, with which ungrateful men pierce it at every moment, and there is no one to make an act of reparation to remove them.”  Then the most holy Virgin said: “Look, my daughter, at my Heart, surrounded with thorns with which ungrateful men pierce me at every moment by their blasphemies and ingratitude.  You at least try to console me and say that I promise to assist, at the hour of death, with the graces necessary for salvation, all those who, on the first Saturday of five consecutive months, shall confess, receive Holy Communion, recite five decades of the Rosary, and keep me company for fifteen minutes while meditating on the fifteen mysteries of the Rosary, with the intention of making reparation to me.”

And there it is. There is our solution to the mess we are in. That is our task, the task of the laity. The bishops and the Pope, they have another role, namely the consecration of Russia to the Immaculate Heart, but we must do our part and that is the First Saturdays Devotion. This coming Saturday is the first Saturday of the month. So will you start with me here and do this for at least 5 first Saturday’s of the month. Confession – within 8 days, Holy Mass, Communion,  a single rosary and then a meditation of 15 minutes on all the 15 mysteries of the rosary. All offered for the intention of reparation to Our Lady.

We can do this. And with it we can pray for the conversion not only of Biden and Beccera but also of the prelates who fail in their prophetic mission to warn Catholics who abuse Our Lady of the need to repent before the wrath of God falls on them.