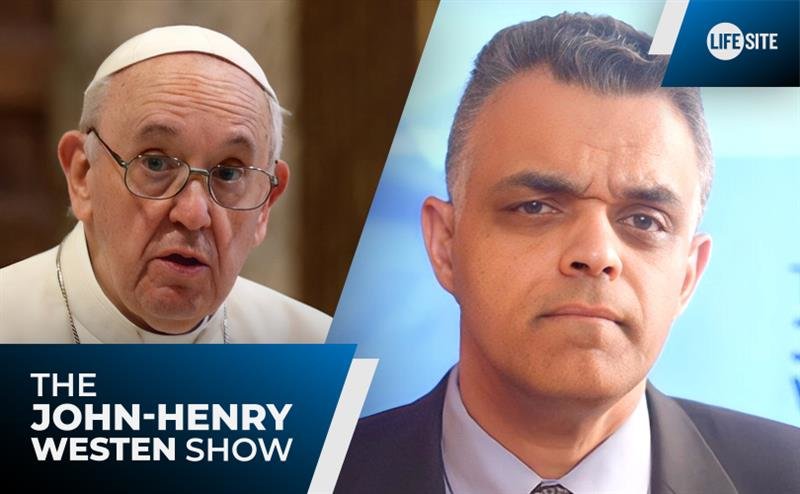 (LifeSiteNews) — Did you see over the last few days that Pope Francis responded to several questions from the homosexuality-promoting Jesuit priest James Martin? Funny how he can find time to answer certain questions, or dubia, when they come from a heretical priest but not for four of the most faithful cardinals in the Church.

The Q&A between Francis and Martin is a great study in diabolic disorientation. It is a brilliant example of “weaponized orthodoxy.” So if you’ve ever wondered what that concept was all about, stay tuned. This is The John-Henry Westen Show.

Have you ever felt like Francis is trying to frighten us into abandoning orthodox Catholic doctrine?

But let’s see how Francis’s answers contain truths and falsehoods mixed together that sow confusion with ambiguity much more so than plainly teaching error.

1. Martin asked: “What you say is the most important thing for LGBT people to know about God?”

Francis wrote that “God is Father and he does not disown any of his children.”

He said that at the final judgment, many will claim to have been His followers and done miracles in his name: but unless they have done the will of His Father, He will say to them: “I never knew you: depart from me, you that work iniquity.”

2. Martin asked: “What do you want LGBT people to know about the Church?”

Francis told them to read the Acts of the Apostles where they will find “the image of the living church.”

Is that the same book of the Bible where, in perhaps the first ever papal address, Saint Peter told his listeners: “Save yourselves from this perverse generation”?

Where Saint Peter told Simon Magus to do penance for his wickedness if he were to have any hope of forgiveness?

Where one of the three first commands imposed on Gentile Christians at the first ecumenical council was to abstain from fornication?

But the third answer really reveals some underhand tactics …

3. Martin asks Francis what the Pope would say to “an LGBT Catholic who has experienced rejection from the church.”

The basic gist is that he is saying the Church is not composed solely of holy or morally good people, and affirming that homosexuals are also called and obliged to enter the Church.

But of course, this is true! We know this! Every Catholic should know this.

But it’s clear there are two prongs to this tactic: First, Francis is insinuating that we don’t know this, and that we think the Church is for the pure only. And second, he is insinuating homosexual persons are invited to join while not only continuing in their chosen lifestyle, but also while affirming its moral acceptability.

And here we have that modern phenomenon: weaponized orthodoxy – using true principles to advance modernism against the only people who actually care about those principles: faithful Catholics.

Look, we don’t need to go any further into the question of whether Christ and his Church call all men to salvation, and to living according to the natural moral law. We know this. We also know that all of us are flawed and fall into greater or lesser sins, more or less often.

Some Catholics, of course, may even fall into homosexual sins.

Nor must one imagine that the Body of the Church, just because it bears the name of Christ, is made up during the days of its earthly pilgrimage only of members conspicuous for their holiness. (No. 23)

But the idea that one can be a Catholic while affirming that homosexual acts are morally good is false. It is totally false. So to bring it home for you, the Catholic who falls into homosexual sin, knowing that it is wrong but being tempted severely falls but repents, is and remains a Catholic. However, even if it were that Father James Martin remained always celibate as his vows require, but believes that homosexual acts are not wrong, he is NOT a Catholic.

The Church is completely clear on this: The Church is indeed selective when it comes to the profession of faith. As the Church teaches officially:

Actually only those are to be included as members of the Church:

– who have been baptized

– and profess the true faith,

– and who have not been so unfortunate as to separate themselves from the unity of the Body,

– or been excluded by legitimate authority for grave faults committed. (No. 22 of Pius XII’s encyclical Mystici Corporis Christi)

Someone who doesn’t meet this description is not a Catholic. But did you hear anything there about moral goodness and pure blood there?

No, there’s nothing. Pope Francis already denied that idea as if we didn’t but we do!

A bit further on, Pius XII reaffirms this point:

Not every sin, however grave it may be, is such as of its own nature to sever a man from the Body of the Church, as does schism or heresy or apostasy. (No. 23)

This isn’t just Pius XII’s teaching – he is just one of the most recent popes to affirm it.

It is just impossible for someone to be a Catholic, a member of the Church, while openly and knowingly departing from her teaching.

Why is this important?

In other words, we can sometimes be in a hurry to address the detail of the particular moral truth being attacked – which can sometimes leave questions of faith to one side.

Pope Francis is setting up a straw man. He is accusing us of a crass error against doctrine, and making it seem like insisting on the life-giving message of the Gospel is actually Pharisaism, sectarianism, and puritanism.

He’s trying to link an insistence on the natural moral law, with the error that the Church is composed only of the pure.

And all this to try to frighten us away from the truth about the natural law.

He does this with powerful weapons: orthodox points of theology, twisted out of shape.

He’s trying say that Catholic orthodoxy itself requires us to accept as Catholics those who deny the Catholic faith. Similarly, he is trying to make people of good will think that groups like LifeSiteNews are insisting on some impossible (and theologically wrong) standard for membership.

The idea he’s imputing to us is nearly heresy or “proximate to heresy,” according to theologians. He is accusing us of being near to heresy – and using this to try to frighten us into giving up Catholic teaching both on sexual morality and on the Church herself.

There we have it: weaponized orthodoxy.

1
Catholic foundation attempts to save historic basilica up for sale due to clerical sex abuse
2
Moderna CEO: 30 million COVID jab doses will be tossed ‘because nobody wants them’
3
Cardinal Zen offers Mass after his arrest, says ‘martyrdom is normal in our Church’
4
The message of Our Lady of Akita looms large amid increased risk of nuclear annihilation
5
Bp. Strickland bans Pelosi from Holy Communion until she ‘stops advocating the murder of children’
Subscribe to Daily Headlines »