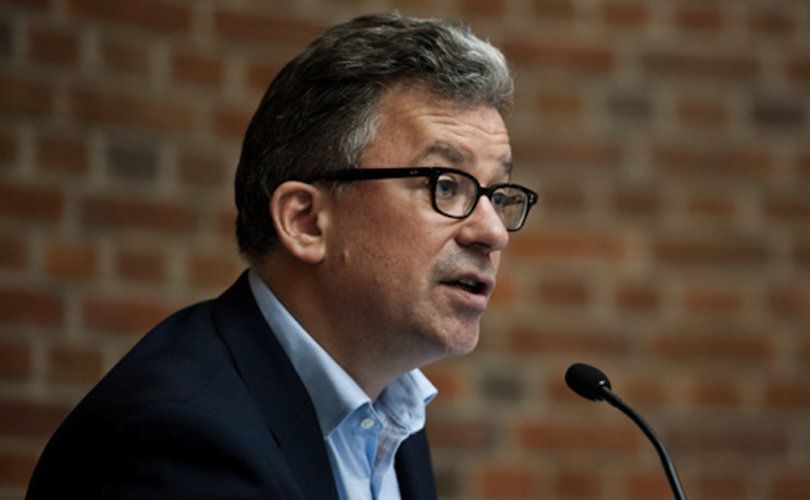 February 15, 2019 (LifeSiteNews) – Gerhard, Cardinal Müller, until recently the Prefect of the Congregation for the Doctrine of the Faith (CDF)—the third most senior Prelate in the Church—recently published what he called a Manifesto of Faith. It consists of quotations and paraphrases of the Catechism of the Catholic Church, and avoids the hot-button issues of the moment. There is nothing in it about divorce, about receiving Communion in a state of mortal sin, about homosexuality, or about Capital Punishment. Müller is well-known as a friend and collaborator with the liberation theologian Gustavo Gutiérrez: he is not exactly a theological conservative from Central Casting.

Reading this document I wondered why, if he didn’t want to say anything directly related to the current doctrinal crisis in the Church, he had bothered to pick up his pen. The reaction to his Manifesto, however, made me think again.

Austen Ivereigh, Pope Francis’ biographer and a key member of “Team Francis”, the self-appointed interpreters and defenders of the Pope, was enraged. He condemned Müller's Manifesto in a tweet:

A naked power play. Declare a state of confusion, then promote yourself as the one to “resolve” it. In implying that a former Vatican bureaucrat needs to step in to fill a supposed vacuum, you delegitimise the papal magisterium. And confuse the faithful.

“Vatican bureaucrat” is an odd way to describe the Prefect of the CDF; Müller is a theologian, and it is hardly surprising to see a theologian produce a theological text. In this case a theological text intended for the ordinary Faithful with nothing remotely controversial in it. But Ivereigh tells us that this is tantamount to an attempted coup against Pope Francis.

Challenged on this, Ivereigh dug himself deeper into his hole of hysteria.

It is not, obviously, the content — recycled Catechism, mostly— that confuses the faithful, but the divisive insinuation that the magisterium needs saving, or correcting, on behalf of a “confused” Church. Müller is free to protest the pope, not to pretend he is the pope.

Ivereigh is so worked up about this innocuous document that he stops making any kind of sense. It would be acceptable for Müller to “protest the Pope”, but not to quote the Catechism? Does Ivereigh mean that protests against the Pope should not quote official Church documents?

Of course the “insinuation” in Müller’s Manifesto that the Magisterium needs to be “corrected” is a product of Ivereigh’s fevered imagination. It isn’t the Magisterium which needs to be corrected, but, really, the lack of Magisterium. It is the nods and winks and hints, the remarks on airplanes and in private letters and interviews with journalists without official transcripts which have to be taken down from the Vatican website, and then put up again. This is not the Magisterium.

Ivereigh and his friends became terribly excited that a leaked private letter of Pope Francis praising the somewhat ambiguous guidelines of the Bishops of Buenos Aires on the reception of Holy Communion by the divorced and “re-married” was published in the Acta Apostolicis Sedis. The Acta is the official record of Papal acts, so the publication of this letter there was presumably intended to be significant, but it is curious that what we see in this more solemn context is not Pope Francis saying that divorced Catholics can, under certain circumstances, receive Holy Communion while living publicly in an illicit union. It is, instead, that Pope Francis gives his approbation to a set of guidelines intended to meet the circumstances of one part of a Bishops' Conference which may, or possibly may not, be understood to permit this, let alone how such permission can be squared with various fundamental theological principles.

Why does Pope Francis not simply say what he wants to say, clearly and openly? Why does he not, for that matter, answer the “Dubia” submitted to him by four cardinals in 2016, which sought clarifications on the implications of Amoris Laetitia? It is as if, for practical purposes, and on the most pressing issues of the day, the Papal Magisterium has ceased to function.

There are, of course, various possible answers to my questions. Pope Francis has judged, for whatever reason, that it is better to allow the debate about divorce and remarriage to continue without any decisive clarification from him. Ivereigh and the rest of Team Francis claims that the position is crystal clear, but it is difficult to imagine that even they really believe that. The situation is unclear, and Pope Francis prefers that to the alternative.