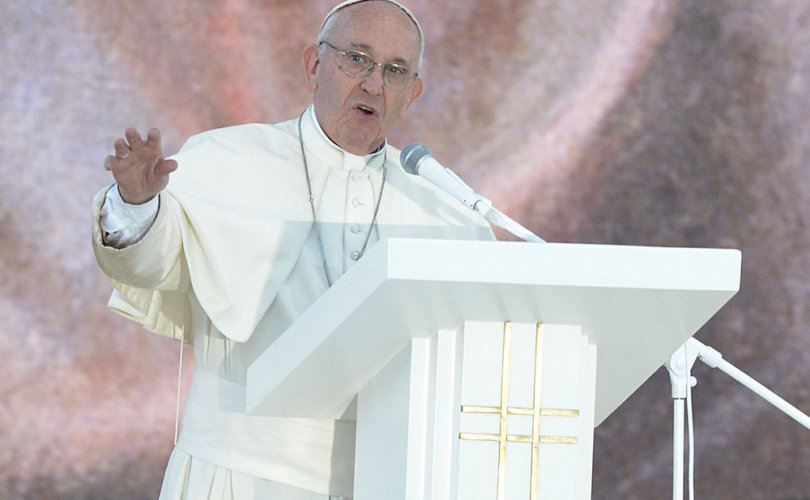 March 24, 2017 (LifeSiteNews) — Pope Francis has called the problems faced by refugees and migrants the “greatest tragedy since that of World War II.”

During his March 22 General Audience he greeted an Italian association that offers services and help to migrants and refugees upon their arrival and said: “Let’s not forget that this problem of today of refugees and migrants is the greatest tragedy since that of World War II.”

Yes, migrants and refugees certainly need compassion and help. Who is not deeply moved when viewing photos of dead bodies, including children, washed up on shore after overcrowded boats bound for Europe capsize in the Mediterranean sea? Who is not affected after seeing images of overcrowded migrant camps with almost impossible conditions or the long lines of people marching to anyplace where they might find some refuge?

Yes, all of this is a tragedy. But is it true that it is the “greatest” tragedy in the past 72 years?

While the displacement of people affected by war and civil unrest likely reaches into the millions, and surely has taken lives, I can quickly think of another tragedy that causes even greater suffering, destruction, and distress.

That tragedy is abortion.

Researchers estimated this year that one billion humans (a thousand million) have been killed by abortion worldwide in the past century.

The tragedy of abortion not only destroys preborn human beings, but it also devastates the lives of the mothers who have them. Think of the tragedy of millions of women alive today who have become spiritually and psychologically damaged by abortion. How can they love themselves or those around them, including their surviving children, when they struggle with the guilt that comes from killing the innocent? Think of the millions of fathers who feel worthless for having failed to protect their child from a horrific death? The ripple effect of abortion is staggering. It leaves no one untouched.

I tweeted this response:

Nope. It’s the tragedy of more than a billion humans who were destroyed before they could migrate out of their mothers' wombs #ProLife https://t.co/lJGGFL32nf

Cardinal Burke said in an interview last September that the priority of defending life must not change in the Church if Catholics are to get other issues such as immigration right.

“We have to give the first priority to the respect for human life and for the family in order to have the right orientation in addressing all of the other questions which are involved with poverty and immigration, the many challenges that any human being faces in life,” he said at that time.

“It doesn't make any sense at all to be concerned about immigration or poverty if human life itself is not protected in society. It's an absolute contradiction. The first justice accorded to any human being is to respect the gift of life itself, which is received from God. And so, that the unborn should be protected and at the same time those whose lives are burdened either by advanced years or special needs or some grave illness, their lives also are to be equally protected,” he added.

Burke suggested that unless there is a “fundamental” respect for life, the question of what should be done about the refugee crisis could turn into a kind of “social engineering” that “can be, in the end, very harmful to society and therefore to the individuals.”

Francis’ comments are reminiscent of comments he made in 2013 when he called youth unemployment and the loneliness of the old the “most urgent” problems facing the Church, and the “most serious of the evils that afflict the world these days.”