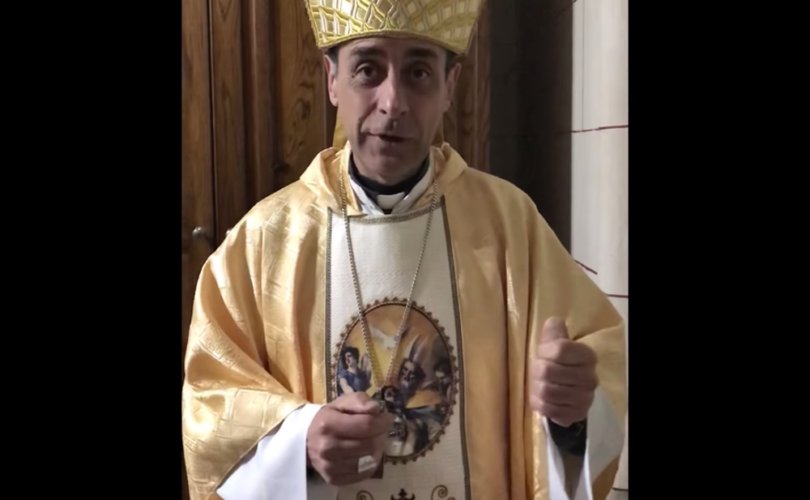 April 28, 2020 (LifeSiteNews) – Archbishop Víctor Manuel Fernández, a papal ghostwriter and personal confidant of Pope Francis, said in a recent interview that the precept of the Catholic Church that Catholics go to church on Sundays and Holy Days of obligation “is not indispensable” and could “fall.”

At the same time, Fernández also mentions the Sacrament of Penance, saying it “has changed a lot over the centuries,” implying a possible change with regard to this Sacrament, as well.

Speaking with the Spanish news outlet Religión Digital in an April 27 report, the Argentine Archbishop of La Plata reflects upon the situation of the Catholic Church in light of the coronavirus. The news outlet describes this prelate, who is thought to be the main author behind the Pope’s controversial document Amoris Laetitia, as being “very close to the thought of Pope Francis.”

The Argentine prelate remarks about several of the Sacraments of the Catholic Church. After first stating that, due to an extended period of “social distancing and quarantine,” we will be required “to reinvent ourselves,” he adds: “I do not know how Pope Francis will do it since he has insisted so much on physical closeness.” About the current “structure of another era,” we do not yet know “what its replacement will be.” One of the “replacements” might have to do with the Sacraments.

With regard to the question of whether the Sacraments of the Holy Eucharist and of Penance need to be “revised,” Fernández states – after insisting that online Masses are “almost a contradiction in terms” due to the “mystery of the Incarnation” – that the obligation to go to Mass on Sundays and Holy Days “is not indispensable” and “is something that could fall.”

The Sunday obligation is one of the Six Precepts of the Catholic Church.

States the Catechism of the Catholic Church: “The precept of the Church specifies the law of the Lord more precisely: ‘On Sundays and other holy days of obligation the faithful are bound to participate in the Mass.’ ‘The precept of participating in the Mass is satisfied by assistance at a Mass which is celebrated anywhere in a Catholic rite either on the holy day or on the evening of the preceding day.’”

Not to go to Holy Mass on Sunday or on Holy Days of obligation without a serious reason is for Catholics a mortal sin. For many Catholics, Mass on Sunday is often the only event in the week where people are in touch with their priests and with the Sacraments and teachings of the Church.

Fernández adds that “the form of the Sacrament of Penance has changed a lot over the centuries” and that the present form “is only one of the possible ones.”

Concerning the Holy Eucharist – without which “the Church cannot be understood” – this prelate points out that there are “different ways” of regarding its place: “one can interpret it in a merely ritualistic or very intimate way, or one can understand it as the great source of communion and fraternal commitment.” In the Eucharist, he continues, “the Word of God Itself reaches its maximum effectiveness.”

Fernández does not mention here that the Holy Eucharist is the very Body, Blood, Soul, and Divinity of Jesus Christ Who is being offered up to God the Father at every Holy Sacrifice of the Mass for the forgiveness of sins. One may never regard it in a “merely ritualistic way.”

This papal adviser also insists that Pope Francis, with his new post-synodal document Querida Amazonia, wanted “to empower the laity and to stop uniting priesthood and power so closely.” Pope Francis, according to this prelate, wishes “to 'distribute' power through new ministries and lay functions 'endowed with authority.'” Archbishop  Fernández regrets that people have not yet picked up on these papal proposals and that “no serious work is being done along these lines.”

Furthermore, he speaks about the fact that in his region, even before the corona crisis, “there was a loss of interest in funeral rites. Little by little the funeral processions were disappearing, the vigils were being shortened or disappeared, many people no longer go to the cemeteries, some simply dispose of the ashes by throwing them into a river.”

“But beyond the objective importance that one can attribute to funeral rites, is this dynamic really positive? Does it help a healthy mourning process?” This crisis might, he adds, become the cause for a “re-evaluation.”

Fernández stresses that the Church in his region has increased now during this crisis her corporal acts of mercy, even re-opening several Caritas offices for the sake of offering help to those who now suffer under poverty. He explains that people now turn to the Church for help who would not have done so under different circumstances. For him, it is important that the Church shows herself as “very humble,” adding that “in a situation like this, we should not talk too much.” That is to say, he seems to stress a Church that helps the poor but does not raise her moral or theological voice too much in these difficult times. The Church should be “discreet, humble and at the same time collaborative and generous.”

This prelate has been a controversial clergyman for many years. Among other things, he has written a book about the “art of kissing.” When being the rector of the Pontifical Catholic University of Argentina and a close confidant of Pope Francis, some of his statements contradicting Catholic moral and sacramental doctrine were discovered to have found there way into Amoris Laetitia.