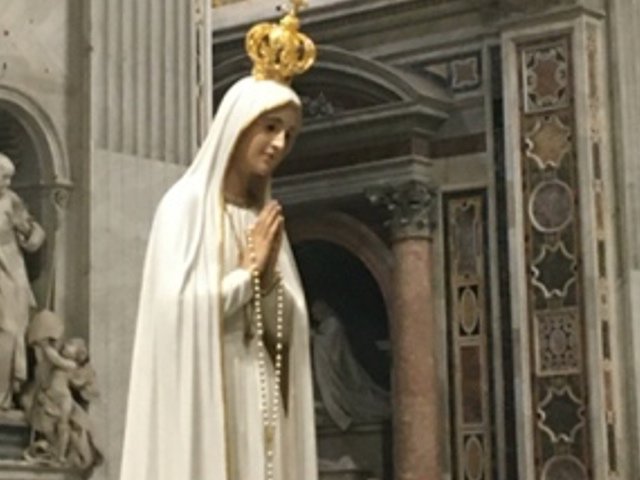 Statue of Our Lady of Fatima in St. Peter's Basilica, March 25, 2022Louis Knuffke/LifeSiteNews

ROME (LifeSiteNews) — On March 25, at St. Peter’s Basilica, Our Lady of Fatima and her Immaculate Heart clearly won the day. Her statue stood front and center before the high altar, under which lay the tomb of the Prince of the Apostles.

With the consecration to the Immaculate Heart preceded by the recitation of the sorrowful mysteries of the Rosary and the annual Lenten penitential service, the mood in the basilica was certainly one of penitence. The cloud of war had brought to men’s souls a tangible reminder of sin and its tragic consequences. A broken Church and a broken world were brought to the feet of Our Lady that day.

Some have wondered and questioned whether what was witnessed by the Church on Friday at St. Peter’s fulfilled Our Lady’s request for the consecration of Russia to her Immaculate Heart. Here are some thoughts and impressions from having witnessed the consecration in person and from hearing the impressions and hopes of other pilgrims from different parts of the world who came to Rome for the event.

There were two things emphasized in the joining of the consecration to the Lenten penitential service: first, the need to turn away from sin, begging God’s mercy through the honest admission of our failings in a sincere, sacramental confession; second, the need to turn to Mary for her intercession for peace in the world. Indeed, war itself was clearly understood as the consequence of sin. And a fully Catholic response to the whole situation was proposed and carried out: public prayer of repentance before God, individual confession of sins, the begging of Our Lady’s intercession through the public recitation of the Rosary, and finally, a solemn consecration to Her Immaculate Heart by the Pope and bishops of the world.

Some have wondered whether the reference to “ourselves, the Church, and all humanity” invalidated, as it were, the consecration of Russia as a fulfillment of Mary’s request. A few considerations may help put this in perspective.

As has been pointed out by others, Russia, along with Ukraine (which was part of Russia when Mary asked for the consecration) was explicitly named and given preeminence by the Pontiff: “We solemnly entrust and consecrate … in a special way … Russia and Ukraine.”

In other similar liturgical ceremonies, while one thing is given preeminence, it does not prevent the inclusion of other things that are more generic. In certain religious orders, for example, it is the practice that the formula for religious vows states, “I promise a conversion of my ways… especially in poverty, consecrated celibacy, and obedience.” The conversion of ways mentioned does not invalidate the specificity of what is mentioned after. In a similar way, the mentioning of “ourselves, the Church, and all humanity” does not mean that Russia was not specifically and expressly consecrated.

Again, in solemn liturgical ceremonies, when something is done for the first time, it does not necessarily prevent the renewal of the same kind of act by others who are also present. At the Easter Vigil, for example, when catechumens are baptized, they make for the first time the solemn renunciation of sin and Satan, along with the profession of faith. Then the rest of the faithful who are present also solemnly renew their baptismal vows and professions of faith.

In like manner, while the consecration of the Church and the world to the Immaculate Heart is a renewal of what previous popes have done, for those present at St. Peter’s on Friday, there is no doubt that Russia was intended and given preeminence in the consecration to Mary’s Immaculate Heart as requested at Fatima. The Pope paused and emphasized this very part of the prayer. Indeed, it was very moving to hear him pronounce these words with all the solemnity he could muster. Both before and after the consecration he reached out in homage to tenderly touch the foot of the statue of Our Lady of Fatima. The only words he added on his own to the printed text of the consecration were, “Maria, Madre.”

In his own person, dragging his left leg as he walked, the Pope seemed to exemplify the broken Church and world that he brought to Our Lady’s feet. Could things have been done more perfectly? Perhaps. But was Russia explicitly consecrated by the Pope to the Immaculate Heart of Mary, in union with the bishops throughout the world, with a day of reparation for sin? Yes, absolutely. Emphatically, yes. And will this draw down a deluge of graces for the Church, for Russia and Ukraine, and for the world? Yes, again absolutely, yes.

We must now continue more than ever to pray the Rosary daily for peace, repent of sin, and make the five First Saturdays, as Mary asked at Fatima. But with the consecration of Russia to Her Immaculate Heart, we should also remind Our Lady of her promise of peace. At St. Peter’s Basilica, as the whole Church celebrated the first announcing of salvation to her in Nazareth, her Immaculate Heart clearly won the day. We should pray now that we see soon the triumph of her Immaculate Heart in Russia and throughout the world.