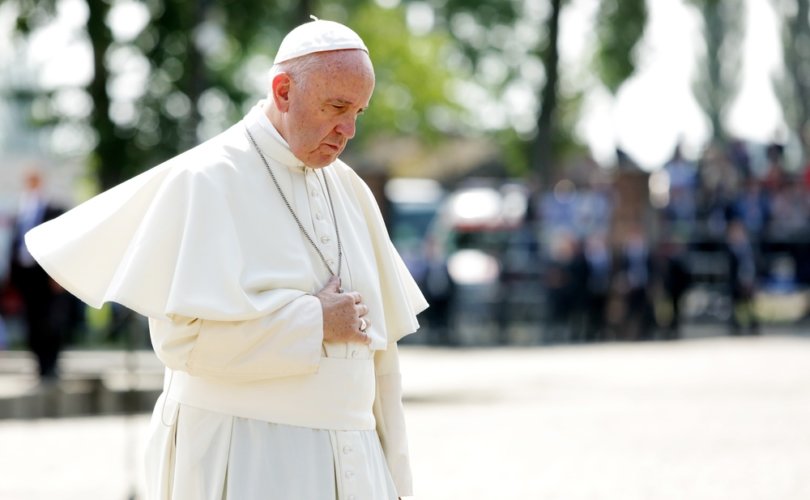 March 16, 2018 (LifeSiteNews) – Pope Francis has received significant pressure from Poland against his reformation of the Church’s approach to moral questions.

Over 140,000 Poles signed a petition in recent weeks urging their bishops to remain faithful in the wake of Amoris Laetitia and pressure, especially from the German hierarchy, to allow Holy Communion for adulterers. When the Polish bishops met to discuss new guidelines regarding Amoris Laetitia the majority supported following John Paul II in refusing Communion to remarried.

The Polish criticism has evidently gotten through to the Pope. At the General Audience on Wednesday, Pope Francis gave a talk about the Holy Eucharist. After the end of the talk, while giving greetings to the various language groups, the Pope threw the Polish pilgrims a bone. Pope Francis said: “We know that one who has committed a serious sin should not approach Holy Communion without having first obtained absolution in the sacrament of Reconciliation.”

Now, while it is true that the Pope is known to say different things to please different groups, the statement to the Polish pilgrims demonstrates the concerns of the Poles have registered in the Vatican.

The effort to shore up support for the Pope was also seen this week in the papal ‘lettergate’ scandal as the Vatican was caught doctoring a photo of a letter from Pope Emeritus Benedict to make it seem like he was backing the new theology of Pope Francis.

Another time that pressure on the Pope registered, he sent Archbishop Angelo Becciu to garner public support. Becciu apologized on the Pope’s behalf for Francis’ gaffe calling a mother of eight children “irresponsible” and cautioning against Catholics breeding “like rabbits.”

Becciu was out again this week on another mission to engender sympathy for Pope Francis. Becciu, the Substitute for the Vatican Secretariat of State, said the Pope was hurt by criticism of his fidelity. The Archbishop said that while the Pope is calm, “he is a human being, so he also suffers.”

“Some critics,” said Becciu, “besides being gratuitous, reach the core of one's being.”

Becciu spoke specifically of accusations that the Pope is “betraying Church doctrine,” which he said were not true. ”This is not true. He does not accept this and it is the most serious accusation that one can receive.”

Despite the fact that the Polish disapprovals have been noticed, they are not likely to have much effect beyond the publicity stunts to appeal for public support.

All the efforts of various Cardinals to induce Pope Francis to protect the traditions of the Church have met with retaliation rather than change.

His displeasure toward the Polish hierarchy can be seen in the fact that he has not named a single Cardinal from Poland. In fact, since the retirement of Krakow Cardinal Stanisław Dziwisz in December of 2016, the only active Cardinal in Poland is the Cardinal of Warsaw, leaving the historic royal capital of Krakow without a Cardinal. Of note, Krakow is the see from which the world received Cardinal Karol Wojtyla who would become Pope St. John Paul II.

Whether or not he will retain that perceived animosity will be on display in June when another consistory is likely to take place. Will a Polish prelate be one of the six new voting Cardinals named by the Pope to replace those who by that time will have aged beyond the voting age-limit of 80 years?