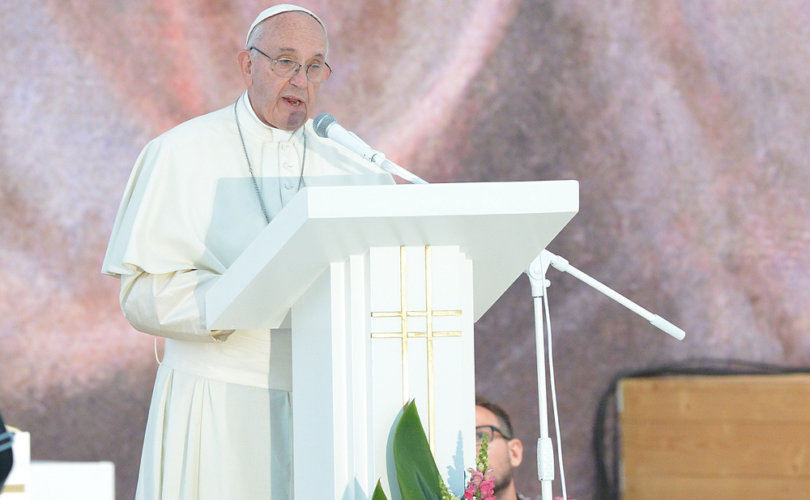 March 27, 2017 (LifeSiteNews) – For months the Vatican has been sending Catholics a steady stream of indications that Pope Francis agrees with the modernists’ view allowing Communion for divorced and remarried Catholics.

We had his signature on a letter supporting the Buenos Aires bishops’ interpretation of Amoris Laetitia. We had testimony to the Pope’s view by Germany’s Cardinal Marx, one of the Pope’s Council of 9 Cardinals. We had the Maltese bishops say so. We had the chief interpreter of legislative texts at the Vatican say so. And we’ve seen numerous articles published in the Vatican newspaper advocating this break with Tradition.

There have been a couple of opposing voices, such as that of Cardinal Muller, the Prefect of the Congregation for the Doctrine of Faith, and most recently the Chilean bishops.

While the statements from Cardinal Muller seemed to be more his own opinion than that of the Pope, the Chilean bishops recently made comments to one of Chile’s major papers that seemed to indicate Pope Francis himself gave them a conservative interpretation of his exhortation forbidding Communion for divorced and remarried Catholics. In addition, some Catholic bloggers have interpreted the Chilean bishops’ statements to indicate that Pope Francis also opposes communion for Catholic politicians who support abortion. Some have even taken from the bishops’ remarks that the Pope rejects a married priesthood, contradicting what he said to the German newspaper Die Zeit in an interview only a short time after their meeting.

To sort all this out is not easy. One key comes from the Catholic Herald’s Dan Hitchens. He points out correctly that the reporter who interviewed the Chilean bishops, and those commenting on the bishops’ remarks, may actually be engaging in wishful thinking.

The original article in El Mercurio intermingles the personal statements of members of the Chilean bishops conference with secondhand accounts of what the Pope told those same bishops. For the most part, the only statements attributable to the Pope are vague anecdotes.

But as we’ve laid out above, there is massive confusion in the Church about where exactly the Pope stands on the matter. Even though a thorough assessment clearly shows the Pope backing communion for divorced and remarried Catholics, there are cardinals and bishops who suggest the Pope means the opposite.

For those who knew Cardinal Jorge Bergoglio prior to his election to the pontificate, this is nothing new. I spoke to a few priests from Buenos Aires who worked with Cardinal Bergoglio in different capacities and from them learned that confusion is emblematic of his ministry. One anecdote in particular was very instructive. I was told that people from opposite camps would both come out of meetings with Cardinal Bergoglio believing he supported their position. “He’s with us but can’t say so publicly,” they would relate, as would those who met with him from the opposing camp.

While in an archdiocese this may work for a time, this learned priest told me, in the Vatican where just about everything the Pope says is trumpeted to the world, these kinds of discrepancies become evident more quickly. Francis, the priest told me, is very much a Peronist — named for former Argentina President Juan Domingo Perón. Like Perón, Pope Francis plays with both left wing and right wing factions.

The priest tells a story about President Peron that helps to understand Francis. Once Peron was in his car and at a fork in the road his driver asked him which way he would like to go, to which Peron replied: “Put the flicker on for a right turn, but go left.” One last note about Bergoglio, related by the priest, is that when pushed, he will go left out of a great apprehension of being labeled a right-winger by the media.

Shortly after the publication of Amoris Laetitia, a forward-thinking critic warned that it would become unworkable for the Church if the bishops in Germany would wink at divorce and remarriage while across the border in Poland it would be mortally sinful. Yet who could have envisioned that we’d see bishops and cardinals voicing opposing opinions on what the Pope himself believes and teaches?

The dichotomy is clear evidence that the Pope himself, in refusing to clarify despite the formal and public request of the four Cardinals and associated pleas by countless other Catholic clergy and laity, is guilty of betraying the entire Church. By letting this charade continue he has sown confusion into the hearts of the faithful. This confusion could lead to mortal sin and thus eternal damnation.