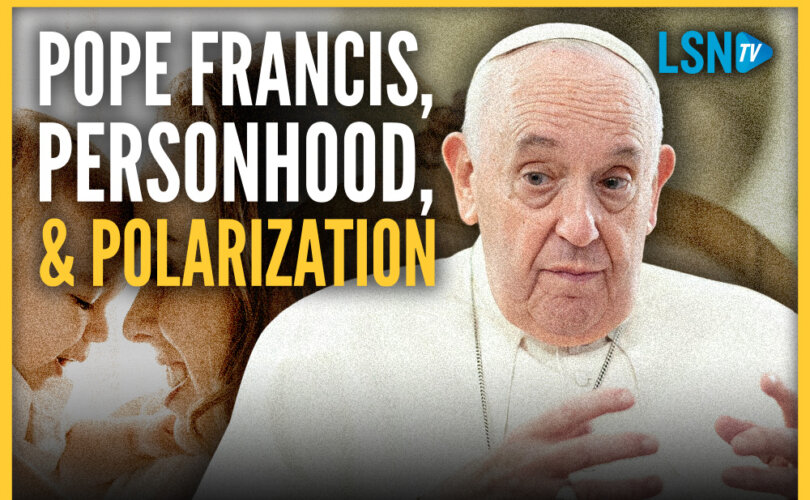 (LifeSiteNews) — In a new interview with America Magazine, Pope Francis upheld the humanity of our unborn brothers and sisters but refused to say that they were, well, people.

But in the United States of America, the personhood of the unborn child is a big deal.

A whole movement called Personhood rose up to demand for the right to life of unborn children being protected in law.

There is legal significance to being recognized as a person. The Fourteenth Amendment of the Constitution of the United States states: “Nor shall any State deprive any person of life, liberty, or property, without due process of law; nor deny to any person within its jurisdiction the equal protection of the laws.”

Now, I know this might come as a shocker, but Pope Francis in his answer to the question on abortion did not say something heretical. I checked with the best theologian I know and learned that the Church has never defined the unborn child as a “person” but has always said the unborn has personal dignity. The medieval theologians did not know about the development and genetics of the child in the womb, so they debated things like when the soul enters the body. Given modern genetic understanding, it seems clear now, but there has been no dogmatic declaration.

— Article continues below Petition —
URGENT: Say No to the UK introducing a “right” to abortion
Show Petition Text
10649 have signed the petition.
Let's get to 12500!
Thank you for signing this petition!
Add your signature:
Show Petition Text

That said, Donum Vitae, the 1987 teaching document of the Congregation for the Doctrine of Faith on the gift of life, says that “The human being must be respected – as a person – from the very first instant of his existence.”

And Pope Francis did deliver that message of respect for the unborn human being. Here was the question put to him by America’s Gloria Purvis and the important part of his answer:

Purvis: Holy Father, abortion is a heavily politicized issue in the United States. We know it is wrong. And the United States Supreme Court recently ruled that there is no constitutional right to abortion. However, it still seems to plague the church in the sense that it separates us. Should the bishops prioritize abortion in relation to other social justice issues?

Pope Francis: On abortion, I can tell you these things, which I’ve said before. In any book of embryology it is said that shortly before one month after conception the organs and the DNA are already delineated in the tiny fetus, before the mother even becomes aware. Therefore, there is a living human being. I do not say a person, because this is debated, but a living human being. And I raise two questions: Is it right to get rid of a human being to resolve a problem? Second question: Is it right to hire a “hit man” to resolve a problem? The problem arises when this reality of killing a human being is transformed into a political question, or when a pastor of the church uses political categories.

What was more controversial in the interview was the Pope’s talk of polarization. Here’s another question put to him by America Magazine:

Polarization is not Catholic. … The more harmony there is between the differences and the opposites the more Catholic it is. The more polarization there is, the more one loses the Catholic spirit and falls into a sectarian spirit.

Now, with regard to the polarization in the Church hierarchy – among the bishops, that division is very clear. It is between those bringing another, different, gospel, and those trying to maintain traditional Catholic teaching, especially in the areas of life and family. And sadly, Pope Francis himself is in that mix.

One of the major areas of division is over homosexuality. There is the Fr. James Martin heretical approach of embracing homosexual relationships, espoused by many bishops in the USA including Cardinals Cupich, Tobin, and Gregory, and then there is the traditional Catholic approach of loving those tempted with homosexuality and counseling them to refrain from such behaviors for the good of their souls and to recognize God’s laws about sexual morality.

Another area of division is over abortion. Those same bishops who are for the heretical approach on homosexuality try to undermine the teaching against abortion by including at the same level issues which are not at all on the same level as abortion. Issues such as immigration and ‘climate change’. Sadly, Pope Francis falls into this camp on both issues.

So, yes, there is division or polarization, but just blithely accepting falsehoods alongside the truth is not the way to go.

In fact, the Scriptures are very clear on how to deal with those presenting falsehoods in the Church.

In 1 Corinthians 5:11, St. Paul says: But now I am writing to you not to associate with anyone who bears the name of brother [a fellow Catholic] if he is guilty of sexual immorality or greed, or is an idolater, reviler, drunkard, or swindler—not even to eat with such a one. Similarly in Romans 16:17, Paul writes:  Now I urge you, brethren, note those who cause divisions and offenses, contrary to the doctrine which you learned, and avoid them.

In his second letter, St. John says the same thing: “If anyone comes to you and does not bring this doctrine, do not receive him into your house nor greet him; for he who greets him shares in his evil deeds” (2 John 10-11).

But what about the fact that this is coming from Pope Francis and so many cardinals and bishops?

Well, St. Paul has the answer for our question. In his letter to the Galatians St. Paul wrote:

I am astonished that you are so quickly deserting the one who called you by the grace of Christ and are turning to a different gospe—which is really no gospel at all. Evidently some people are throwing you into confusion and are trying to pervert the gospel of Christ.

I want you to know, brothers, that the gospel I preached is not something that man made up. I did not receive it from any man, nor was I taught it; rather, I received it by revelation from Jesus Christ. [Gal. 1: 6-12]