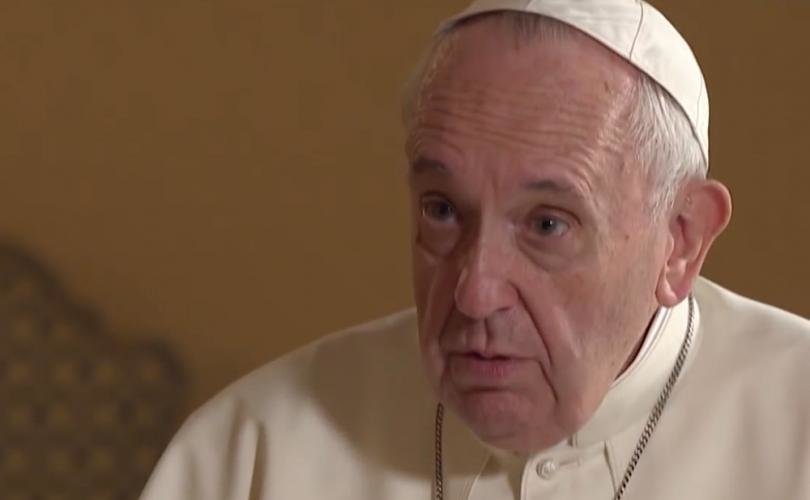 November 24, 2020 (LifeSiteNews) – In a rant by Pope Francis where he lets down his guard and allows his leftist colors to show more than in the past, the Pope said of anti-lockdown protestors, “you’ll never find such people protesting the death of George Floyd, or joining a demonstration because there are shantytowns where children lack water or education, or because there are whole families who have lost their income.”

His comments come in a teaser for the Pope’s new book-length interview with leftist Vatican journalist Austen Ivereigh.

In it, the pope lashes out at anti-lockdown protestors, saying, “those who claim, for example, that being forced to wear a mask is an unwarranted imposition by the state.” He calls them, “victims only in their own imagination.”

But with all the virtue-signaling painfully evident in the book, Pope Francis himself is not all that concerned about mask-wearing in his own house, nor at large gatherings. Just yesterday, in the Vatican, he met with NBA players and officials from the National Basketball Players Association. The meeting took place indoors, without masks, and also without social distancing.

The Pope apparently requested the meeting in which they discussed the NBA’s efforts to promote racial equality and social justice. The NBA had painted “Black Lives Matter” on the court along their sideline, and donned “Equality” and other sayings on their jerseys.

Despite the frustration this outburst from Pope Francis may cause, it is in reality much less disturbing and harmful than the doctrinal errors he has put forward, such as those on divorced and remarried Catholics, on homosexual civil unions, on transgendered couples, on the Abu Dhabi statement, on cohabitation, and on so much more.

So, even though we may be tempted to anger, let’s offer up any feelings of frustration and let us rather pray earnestly for the Pope’s conversion. Yes, ‘conversion.’ Remember, that was Bishop Athanasius Schneider’s advice – to pray for the conversion of Pope Francis. And Bishop Schneider also gave us the best remedy to the Pope’s doctrinal confusion when he released his ‘declaration of truths’ with Cardinal Raymond Burke.