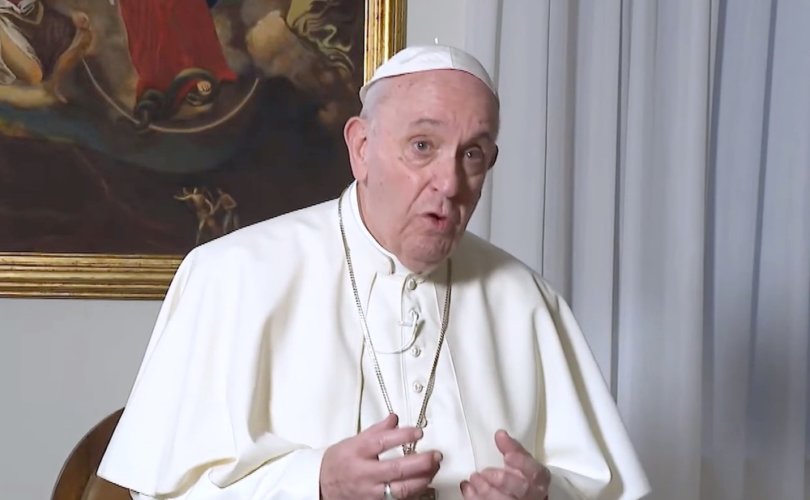 VATICAN CITY, January 5, 2021 (LifeSiteNews) – In the latest video as part of the Pope’s Worldwide Prayer Network (PWPN), Pope Francis appeared to be focused less on prayer and more on making a propaganda piece in order to promote religiously indifferent human fraternity.

The PWPN itself has as its goal “to encourage prayer and action for the challenges facing humanity and the mission of the Church, expressed in the Pope’s prayer intentions.” As part of the PWPN, each month is given to a specific intention, and this January the intention is “Human Fraternity.”

Pope Francis’s video for the January prayer intention is thus focussed on fraternity, and as the accompanying press release describes, calls “for people of different religions, cultures, traditions and beliefs to return to the essential: love of neighbor.”

It builds upon the ideas of the Pope’s recent encyclical Fratelli Tutti, in which he promoted a concept of “Universal Brotherhood.” The encyclical was welcomed by the Masonic Lodge of Spain, who stated that Francis “embraces…the great principle of modern [freemasonry].”

The video’s footage itself arguably promotes the concept of religious indifferentism, opening on a woman praying the rosary, then switching to a Muslim woman and afterwards, a Jewish man performing their respective prayers, before moving to a clip of the Pope.

“Fraternity leads us to open ourselves to the Father of all and to see in the other a brother or sister, to share our lives or to support, to love, and to know each other.”

After highlighting aspects of other religions, Pope Francis then says that for Christians the foundation of “dignity and fraternity” is found in the Gospel.

“The Church values God’s action in other religions, without forgetting that for us Christians, the wellspring of human dignity and fraternity, is in the Gospel of Jesus Christ.” At this point, the video switches once more to footage of the Muslim women finishing her prayers.

“We believers must return to our sources and concentrate on what is essential. What is essential to our faith is the adoration of God and love of neighbor,” the Pope continues. Whilst he mentions adoration of God in the video, the emphasis and further explanation is given entirely to the aspect of fraternity. The video description furthers this message, by drawing on his words at the launch of the Abu Dhabi document in 2019: “Religions, in particular, cannot renounce the urgent task of building bridges between peoples and cultures.”

In a graphic accompanying the video, specific mention is made of the duty of “believers” in promoting human fraternity, which is almost entirely devoid of any reference to religion. Believers are told to “collaborate among ourselves” to respond to the various “scourges of the world,” which include: “War and hunger…poverty…environmental crisis…violence…”

The Pope also mentions the “lack of hope” amongst the current scourges of the world, but a few lines above equates hope with human fraternity saying “It is important for religions to become more and more beacons of hope, as promoters and guarantors of fraternity.” St. Thomas Aquinas instead describes hope as a theological virtue which has God as its object.

Francis further inverts the relation between fraternity and religion, having fraternity as the end to which religion must tend. The Pope poses the two questions: “What does it mean to be at the service of Fraternity?” and “What role do religions play on the path to human fraternity?”

The graphic presents an entirely earthly view of men's relation with each other and with God, as the Pope states that God has made all “human beings equal in rights, duties and dignity and has called them to live together as brothers and sisters,” but does not mention the supernatural vocation which man has to reach heaven.

Pope Francis’s video seems to be thus imbibed with the spirit of Fratelli Tutti, a document which Archbishop Carlo Maria Viganò styled as being “the ideological manifesto of Bergoglio, his profession of masonic faith, and his candidacy for the presidency of the Universal Religion, handmaid of the New World Order.”

In recent weeks, Pope Francis has shown much support for the globalist “Great Reset” plan, which appears to be intimately linked to COVID-19. Head of the World Economic Forum Klaus Schwab, is a prominent proponent of the Great Reset, stating, “In short, we need a ‘Great Reset’ of capitalism.” Schwab has even published a book titled “COVID-19:The Great Reset,” in which he outlines the “changes” necessary for a more “sustainable world going forward.”

Fr. Frédéric Fornos S.J., the International Director of PWPN, noted the link between COVID-19 and the Pope’s renewed push in the video for human fraternity: “After a 2020 marked by the impact of the pandemic, on both the sanitary and socioeconomic levels, it’s especially important that this intention of the Holy Father help us to see each other more truly as brothers and sisters on the path towards peace, which becomes more necessary each day.”

Michael Haynes is a journalist writing for LifeSiteNews. Originally from Cheshire, England, he is a graduate of Thomas More College in New Hampshire. Since childhood he has been very involved in pro-life activity and defending the Catholic faith through public campaigns. Michael writes on materdolorosa.co.uk, and has authored works on Mariology (Mary the Motherly Co-Redemptrix), Catholic spirituality, and most recently published an apologetic work “A Catechism of Errors.” His great love is the Traditional Latin Mass.