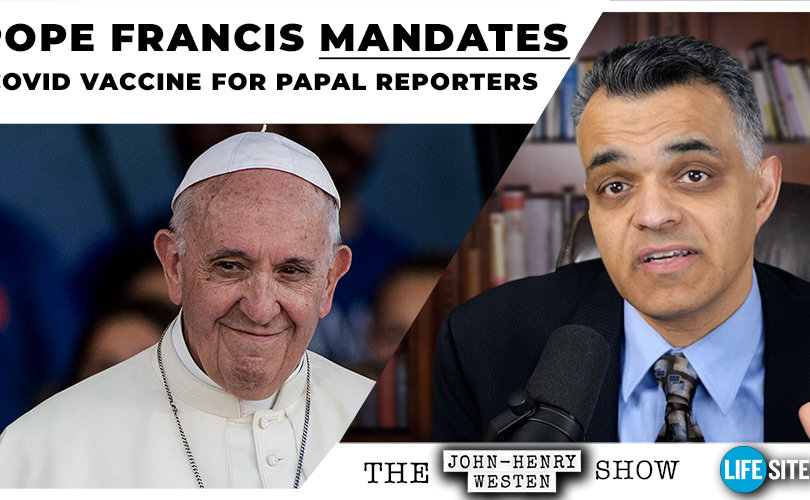 February 25, 2021 (LifeSiteNews) — In the wake of a bit of Vatican backpedaling after world media reported that the Vatican City State was insisting on vaccination for Vatican employees, Pope Francis is now requiring reporters who want to join him on the papal plane during his trip to Iraq to get the abortion-tainted COVID vaccine.

In other Vatican news, Pope Francis has retired one of the last orthodox-leaning heads of the curia — Cardinal Robert Sarah. But there is some amazing news to report, too, as Catholic laity in Australia have heroically defended the honor of their Cathedral against profanation and a world-famous traditional nun has finally been given a green light to open her convent after four years of trying to find a bishop who would accept her.

LifeSite’s Michael Haynes reports this week that in a communique sent out from the Holy See Press Office to journalists looking to join the Pope on his trip to Iraq from March 5-8, mandatory vaccination was stipulated as a prerequisite for travel. Section 3 of the document contained the “prescriptions and health advice,” which include requirements for masking and social distancing, however, beyond this, the Vatican decreed that in order for journalists to present themselves for the journey, “it is necessary to have undergone the vaccination against COVID-19 within the appropriate time.”

Should a journalist be unable to receive the vaccine in his home country, he is ordered to contact the Vatican and request a vaccination. Both doses of the vaccines would then be administered before the trip commences. Vaccine certificates are required as proof of the injection.

Furthermore, the vaccine mandate seems to extend not just to journalists who accompany the Pope on his flight, but to all those who “participate in the Apostolic Journey,” regardless at what stage or how closely they join him.

The Vatican City State issued a decree in early February, calling the reception of the experimental vaccine a duty in maintaining the public health, and essentially threatened Vatican employees with the loss of their job if they refused the vaccine. As LifeSite’s Jeanne Smits reported: “[T]he text also implies that workers who refuse the vaccine without ‘proven reasons of health’ and who are in a position to pose a risk to other ‘citizens, residents, workers and the work community’ may not receive another task and payment. In other words, they would lose their job and income.”

After the news caused strong backlash, the governor of the Vatican City State, Cardinal Giuseppe Bertello, was forced to issue a response to his own directive. He said that those who simply refused the experimental vaccine would be allowed “to find alternative solutions for the performance of work by the person concerned.” Smits described the new note as “damage control,” commenting that despite this note, the original decree “did not provide for anything of the sort. It only said that alternative tasks would be found for workers who ‘for proven reasons of health’ could not receive the jab.”

Francis himself has compared taking such COVID vaccines to a moral duty, stating: “I believe that, ethically, everyone should take the vaccine.” Along with Pope Emeritus Benedict XVI, Francis was one of the first to receive the vaccine when injections began in the Vatican in January.

In related news, Pope Francis has retired one of the last remaining orthodox Cardinals in the curia. While allowing left-leaning cardinals to remain in office years after their required resignation letter upon turning 75, the Pope insisted on retiring Cardinal Robert Sarah without even the customary naming of a successor.

At LifeSite you’ll find a full write-up of the Cardinal’s amazing history in our coverage by LifeSite’s Pete Baklinski. But here are my favorite parts.

Cardinal Sarah has defended traditional Catholic practices, such as receiving Holy Communion kneeling and on the tongue and celebrating Mass facing the east (ad orientem). He has warned that the Church is facing a “grave risk” of schism over morality. He has told priests that they cannot shy away from the “hard” teachings of the church on abortion and homosexuality.

In his 2017 book, The Power of Silence, Cardinal Sarah wrote that he opposes priests and bishops within the Church who no longer believe in the Bible and who depart from Catholic teaching and sacred tradition.

“I will untiringly denounce those who are unfaithful to the promise of their ordination. In order to make themselves known or to impose their personal views, both on the theological and the pastoral level, they speak again and again. These clerics repeat the same banal things. I could not affirm that God dwells within them,” he wrote. Sarah also warned “bishops that scatter the sheep that Jesus has entrusted to them will be judged mercilessly and severely by God.”

But there is something great in Cardinal Sarah’s departure; he left us a parting gift. A tweet from May 3 pinned to the top of his Twitter page as he was retired which remains there today reasserts his position that the faithful may not be denied communion and confession, even during the pandemic. Here it is in his words:

“Nobody can prevent a priest from confessing and giving communion, nobody has the right to stop him. The sacrament must be respected. So even if it is not possible to attend Masses, the faithful can ask to be confessed and to receive Communion. +RS”

Nobody can prevent a priest from confessing and giving communion, nobody has the right to stop him. The sacrament must be respected. So even if it is not possible to attend Masses, the faithful can ask to be confessed and to receive Communion. +RS pic.twitter.com/ZvwjSoTpuo

What a hero. Thank you for your service to Christ and His Church, Cardinal Sarah!

And speaking of heroes, check this out. Nearly 200 Catholic faithful in Sydney, Australia, knelt in front of their cathedral praying prayers of reparation and singing hymns as an LGBT exhibit was being held right in front of the Cathedral on the city-owned property. Seeing their faith and determination is awesome and what a great witness to those at the festival.

And finally, I’ve got some great news to share with you. Mother Miriam, whom we all know and love for her daily show on LifeSite called Mother Miriam Live, has finally found a bishop who will let her order — founded under Cardinal Raymond Burke — function again. For the last four years her order was unable to function without a bishop being willing to accept them. Now, praise God, Mother Miriam and her order, the Daughters of Mary, Mother of Israel’s Hope, have finally been invited to put down permanent roots in Beloit, Kansas, following the invitation of the local bishop of Salina, Kansas, Bishop Gerald Vincke.

Without a home, Mother had to turn away hundreds of faithful young ladies who wanted to give themselves to the most important work on earth — offering themselves in prayer for the Church. But she’s back in business now — the business of saving the world.  If you’re sick of supporting liberal organizations and want to make an investment in something rock solid, faithful to the core, traditional, and truly beautiful, please support Mother Miriam’s work. They need a home immediately, but eventually want to build an abbey. Support this powerhouse of evangelization by going to LifeFunder.com and click on the link saying “A Home for Mother Miriam.”

I’m going to have Mother on this show again soon to invite women to join her order.

For all you LifeSite fans out there I included in the show a short clip from Mother’s latest interview with LifeSite’s Danielle Zuccaro to let you know what she thinks of LifeSite. To view the entire interview on our LifeSite Catholic Rumble channel, you can click here. May God bless you.