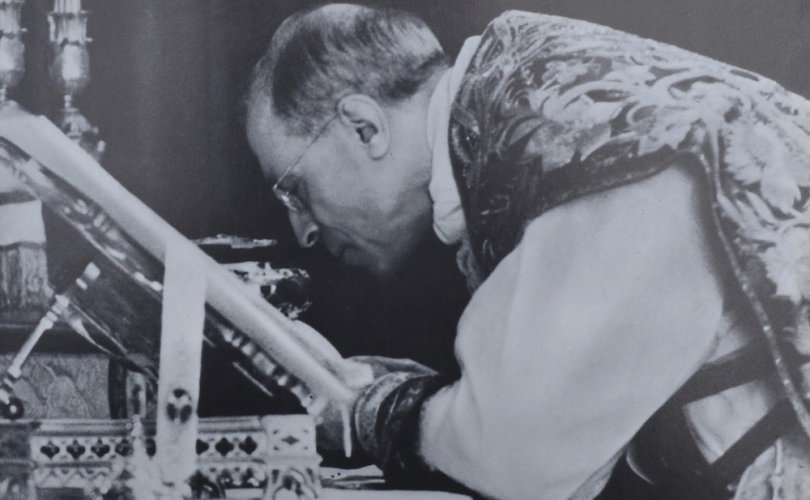 March 4, 2019 (LifeSiteNews) – Pope Francis, in an audience with the members of the Vatican Secret Archives, announced today that he will open next year the archives covering the time of Pope Pius XII’s pontificate from 1939 to 1958, up to and including his death.

This decision was published shortly after the 80th anniversary of Pius XII’s papal election on March 2, 1939, and the archives are to be opened exactly one year after that historic anniversary. The German Church historian Dr. Michael Hesemann, who has already discovered several important historical documents pertaining to Pius XII’s attempts at helping Jews during World War II, sees in this papal initiative a possible sign that Pius XII’s beatification may be coming.

In today's audience with the members of the Vatican Secret Archives, Pope Francis, after thanking them for their hard work in carefully studying and organizing the files of Pius XII's pontificate, explicitly mentioned that this pope lead “the Barque of Peter” at a very difficult time period, the “saddest and darkest” time of the 20th century – the “ultimate world conflict” – but also at a time of “reorganization of the nations and post-war reconstruction.”

Pius XII “has already been investigated and studied in many aspects,” and sometimes criticized “with some prejudice and exaggeration,” said Pope Francis. Now this pontificate is to be “appropriately re-evaluated and indeed placed in a just light for its multifaceted qualities: first of all pastoral, but then also theological, ascetical, and diplomatic.”

Pope Francis is “serene” in this decision and “confident, sure, that the serious and objective historical research” will evaluate this pontificate “in a just light, with appropriate criticism, moments of exaltation.” He suggested it will also show “moments of serious difficulties, of tormented decisions, of human and Christian prudence,” which some people see as “reticent.” Such decisions – and here Pope Francis perhaps was referring to many criticisms that Pope Pius XII lacked courage during the Nazi occupation of Europe and failed to do more to protect Jews – were attempts “to keep the flame of humanitarian initiatives alive, at times of intense darkness and cruelty.”

These attempts are “hidden but active diplomacy,” said Pope Francis, adding, “the Church is not afraid of history, on the contrary, she loves it.” His decision to open these archives to the public means that he did not wait until 2028, when the customary 70-year embargo would end.

Dr. Hesemann, who recently published a book on Pope Pius XII, said in an article for the Austrian Catholic website Kath.net that, with this papal decision, “the signs are multiplying that Pope Francis soon wants to beatify the World War Pope.”

It was Pope Paul VI who first ordered a thorough examination of the Pius XII archives in order to assess a possible beatification of this Pope, Hesemann recounted. The result of 16 years of research was then published in 11 volumes – 7,700 pages – with more than 5,000 heretofore unknown historical documents. In May 2007, the commission for the beatification of this Pope then unanimously approved of this case.

However, Pope Benedict XVI, out of caution, then had asked an independent historian to review once more all of the archives of Pope Pius XII. Hesemann explained it was only after this additional examination, “which also did not find any compromising documents, but, on the contrary, innumerable proofs for the tireless activities of this World War Pope in order to rescue the Jews,” that Pope Benedict XVI signed on December 19, 2009 the document declaring the “heroic virtues” of his Pius XII.

Dr. Hesemann wrote that the archives of Pius XII contain “explosive documents on the Holocaust and the rescue of nearly one million Jews on the part of the Vatican.” The German historian has worked for years now with a Jewish organization called Pave the Way Foundation (PTWF), which was founded by Gary Krupp of New York.

“Historians of the PTWF were able to show that Pius XII saved nearly one million Jews from the Holocaust,” wrote Hesemann.

He was able to find documents in the files of the pontificate of Pope Pius XII that show “that Pacelli, already in 1939 (that is to say two months after the Pogrom Night), as Cardinal Secretary of State, tried to get visas for 200,000 German Jews.” In the wake of this revelation, the Holocaust memorial site Yad Vashem replaced a plaque on Pius XII which had been critical of him with a more neutral one.

In 2018, Hesemann published a book in collaboration with PTWF that summed up the most important new findings on Pope Pius XII’s actions before and during World War II. He also showed that PTWF has been closely working with Vatican representatives, such as Cardinal Pietro Parolin, the current Cardinal Secretary of State.

Further proof that the Vatican is moving toward a beatification of Pope Pius XII comes from the fact that, in October 2018, Archbishop Marcello Bartolucci – the secretary of the Congregation for the Causes of Saints – denied that the beatification was halted. He said that only the necessary miracle was still missing. He furthermore rejected claims that Pope Pius XII had been silent about the Holocaust and he called such claims the consequences of a “smear campaign.”

The prelate further explained that those involved in the beatification process did not let themselves be influenced by this campaign and that historians today have a more neutral attitude toward this topic. Furthermore, the speaker then read aloud a message sent by Pope Francis himself, in which he called Pope Pius XII an “upright friend of humanity and a loyal servant of the Gospels.”

On December 12, 2018, Hesemann spoke with Pope Francis and gave him his 2018 book on Pope Pius XII and the Holocaust. He then said to the Pope: “Pius XII would deserve it not only to be beatified, he would deserve it to become the patron saint of all refugees and refugee helpers. After all, he got visas for ten [of] thousands, and saved nearly one million persecuted Jews. You can find the proofs in my book.”

“The Pope suddenly became very attentive,” Hesemann recalled. He said Pope Francis answered, “this is very interesting, I thank you. But please pray for me.”

In February 2019, Dr. Hesemann attended an audience with the PTWF and politicians and lawyers from New York, at which these representatives were able to give to Pope Francis, in person, some “important documents.” One of the meeting attendees was New York Assembly Member Anthony D'Urso. His family stems from Italy and had hidden some Jews during World War II, for which they are soon to be honored at Yad Vashem.

Among the documents that were then given to Pope Francis was one order given by Pope Pius XII that the intended deportation of the Roman Jews, in October of 1943, was to be stopped. And indeed, Hesemann says, the raid was then stopped after this papal intervention. Yet another document then handed to Pope Francis shows that Pius XII had ordered that all Roman monasteries and convents were declared “Vatican property” and thus were closed to intrusions on the part of German soldiers and SS men. Thereby, “the Vatican was able to hide 4,205 Jews in 235 monasteries (and some more in Vatican City and in Castel Gandolfo).”

As one diary entry of a prioress in Rome says: “The Holy Father wishes that we save the Jews.”