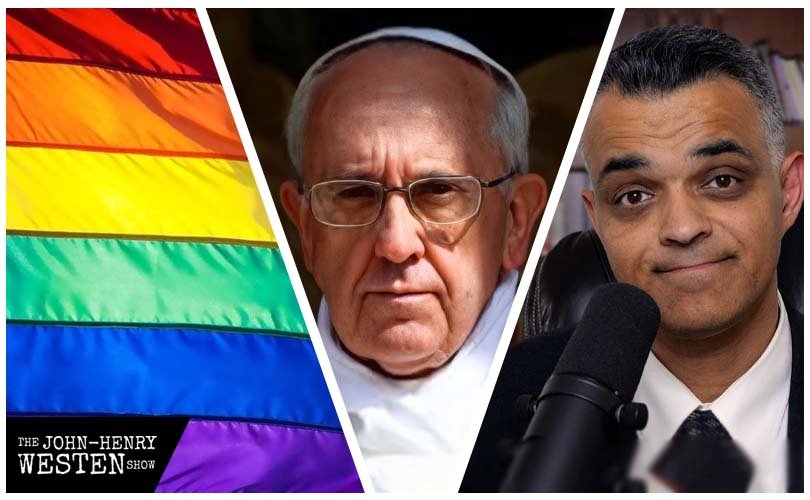 LifeSite Irish correspondent Tim Jackson reports that on Friday, at his meeting with pro-abortion Irish President Michael D. Higgins, Pope Francis told those gathered that, “today, I did not just meet a man, a president; I met a wise man of today.” The Pope added, “I thank God that Ireland has such a wise man as its Head.”

President Higgins is the one who signed into law an abortion bill in 2013 that made the killing of unborn babies legal in Ireland. It was the most devastating blow to Catholic Ireland in its history, worse even than the grave persecutions the nation has suffered.

In November 2015, Higgins moved Ireland even further from its constitutional foundation in divine and natural law by signing a bill that legalized homosexual “marriage” following a referendum. Following a repeal of the country’s constitutional protection of the right to life, Higgins, who, again, was just praised by the Pope, signed another abortion bill in 2018 that legalized abortion-on-demand up until twelve weeks, with abortion up until birth allowed if the baby is found to have a life-limiting condition.

Higgins has also described Ireland’s historic ban on abortion as having “no concern” for Irish women who would travel to England for abortions. He claimed that the successful 1983 referendum campaign to protect unborn babies had been “callous,” “sinister,” and “undemocratic.”

What’s more, in 2019, Higgins signed a bill that reduced the waiting time for divorce following another constitutional referendum.

The Pope’s praise for this pro-abortion politician is reminiscent of his 2016 praise for Italian politician and abortionist Emma Bonino, who was Italy’s leading proponent of abortion for decades.

Responding to Pope Francis’s praise for President Higgins, Ireland’s Catholic Association chairman Brian Flanagan told LifeSiteNews that the most disappointing aspect of the meeting was the pope’s apparent unwillingness to call the Irish leader to repentance.

“Our Pope could have attributed wisdom to one of the principal pro-abortion politicians in Irish history,” Mr. Flanagan said. “He should have informed and warned President Higgins of the eternal consequences for the perpetrators of such a crime against the most defenseless of God’s beloved creation,” he continued.

LifeSite’s Michael Haynes has reported on a new airplane interview Wednesday where Pope Francis once again expressed support for same-sex civil unions, calling for laws to promote civil unions since “we are all equal.”

Responding to a question from Stefano Maria Paci of Sky Tg 24 about the “recognition of homosexual marriages,” the 84-year-old pontiff  first referenced  marriage.

And that is an interesting aspect to Pope Francis. Often when he goes contrary to Church teaching he says something strong seeming to support it first. But then he adds something like this: “if they want to support a homosexual couple in life together, states have the possibility of civilly supporting them.”

“There are laws that try to help the situations of many people who have a different sexual orientation,” he further said.

“Christians who are homosexual are called, as all of us are, to a chaste life,” continued the document, while noting that a “truly pastoral approach will appreciate the need for homosexual persons to avoid the near occasions of sin.”

“All Catholics are obliged to oppose the legal recognition of homosexual unions,” the CDF document affirmed.

John Horvat, vice president of the  American Society for the Defense of Tradition, Family and Property, told LifeSiteNews that, “it is apocalyptically scandalous and a great shame that the highest authority on earth, the Vicar of Christ, publicly endorses homosexual civil unions. It is indicative of our sinful times and why Our Lady warned us of a great chastisement in Fatima.”

Following the Wednesday interview, LGBT advocates were very public in their praise of the Pope’s support for civil unions.

Meanwhile, pro-LGBT “Catholic” group New Ways Ministry  praised  Francis. “If there was any debate left over whether  @Pontifex  supports same-gender civil unions, it is settled,” tweeted  the group.

Only last year, Pope Francis  voiced his support  for the unions in the film  Francesco, calling for “a civil union law.”

Bishop Athanasius Schneider of Kazakhstan  has pointed  out how such an approach is no act of kindness toward persons with same-sex attraction; rather, it is an act of cruelty.

That in-flight interview wasn’t all though. LifeSite’s David McLoone has reported on another alarming remark by Pope Francis backing the giving of Holy Communion to pro-abortion politicians like Joe Biden. And again, just like with his support for homosexual civil unions, Francis starts off with a strong statement that seems to affirm church teaching.

Abortion is “murder, whoever has an  abortion kills,” he said. But then he goes on to allow for giving Holy Communion to the likes of Joe Biden. “The problem is not theological, it is pastoral, how we bishops manage this principle pastorally.”

“Communion is not a prize for the perfect,” Francis said further, proceeding to talk about the “hypothesis” by which priests may give the Eucharist to such people, suggesting that priests might be “close, tender, and give Communion.”

The Pope criticized priests who “go beyond the pastoral dimension” and “become a politician” on the issue of distributing Communion to opponents of the Faith, asking: “What must the pastor do? Be a pastor, don’t go condemning.”

And there is another apropos teaching from St. Paul to mention. Galatians 1:8: “But though we, or an angel from heaven, preach a gospel to you besides that which we have preached to you, let him be anathema.”

A most-fitting verse to recall during these most “merciful” of  times.