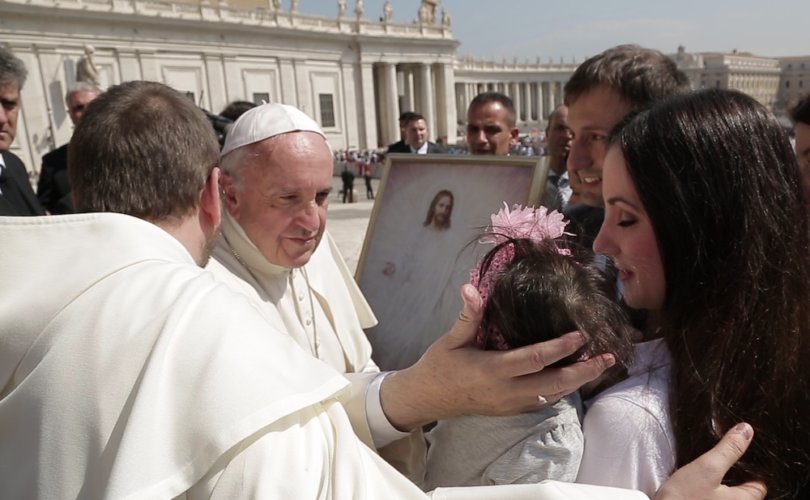 Pope Francis meets with members of Croatia’s 40 Days for Life campaign on April 12. Dalia, a mother who chose life for her child, was there with daughter Nika and both received a blessing from the Pope.

May 1, 2017 (LifeSiteNews) – Mainstream media outlets have trumpeted Pope Francis’ description of climate change as one of the “principal challenges facing humanity,” and youth unemployment as among “the most serious evils” today.

He famously suggested the Church should focus less on fighting abortion, and lauded Italy’s leading promoter of abortion as one of the nation’s “forgotten greats.”

So it may come as a surprise for some that Pope Francis recently called the pro-life cause the most important work on earth.

During the papal General Audience on April 12, Pope Francis met with members of Croatia’s 40 Days for Life campaign.  Dalia, one of the mothers helped to choose life for her child, was there with her daughter Nika and both received a blessing from the Pope.

Fr. Marko Glogović, the spiritual director for the Croatian group presented the Pope with a gift on behalf of the group. The Croatian leader of the 40 Days for Life initiative, Ante Čaljkušić, told the Holy Father that the presence of volunteers in front of Croatian hospitals has saved many lives, and he gave him a precious feet pin, an international symbol of the pro-life movement that is an accurate replica of an unborn baby’s feet at 10 weeks gestation.

“You are doing the best possible work!” Pope Francis told the group. “Save as many lives as possible! I encourage you and bless you with every blessing. There is no more important work from this one, be persistent and pray, pray, pray!”

The Pope assured them of his support and asked for their prayers. The Croatian national coordinator for 40 Days was also there to receive the Pope’s blessing and hear the final words of the Pope to the group, reminding them to “fight, fight, fight!”

For those bewildered by Pope Francis, those who knew Cardinal Jorge Bergoglio prior to his election to the pontificate can shed some light on the situation. Priests from Buenos Aires who worked with Cardinal Bergoglio in different capacities suggest that people from opposite camps would both come out of meetings with the then-Cardinal believing he supported their position. “He’s with us but can’t say so publicly,” they would relate, as would those who met with him from the opposing camp.

According to one priest who knows the Pope but wishes to remain anonymous, Francis is very much a Peronist — named for former Argentina President Juan Domingo Perón. Like Perón, Pope Francis plays with both left wing and right wing factions.

The priest tells a story about President Peron that helps to understand Francis. Once Peron was in his car and at a fork in the road his driver asked him which way he would like to go. Peron replied: “Put the flicker on for a right turn, but go left.”

1
The simple reason why you should stop using Gmail
2
Pro-life Catholic father Mark Houck pleads not guilty to federal charges after FBI raided his home
3
FBI raids home of Catholic pro-life speaker, author with guns drawn as his terrified kids watch
4
Prophecy: War will break out in Europe after Pope visits Moscow
5
Tucker Carlson: Biden admin ‘may have blown up’ gas pipelines in Baltic Sea
Subscribe to Daily Headlines »